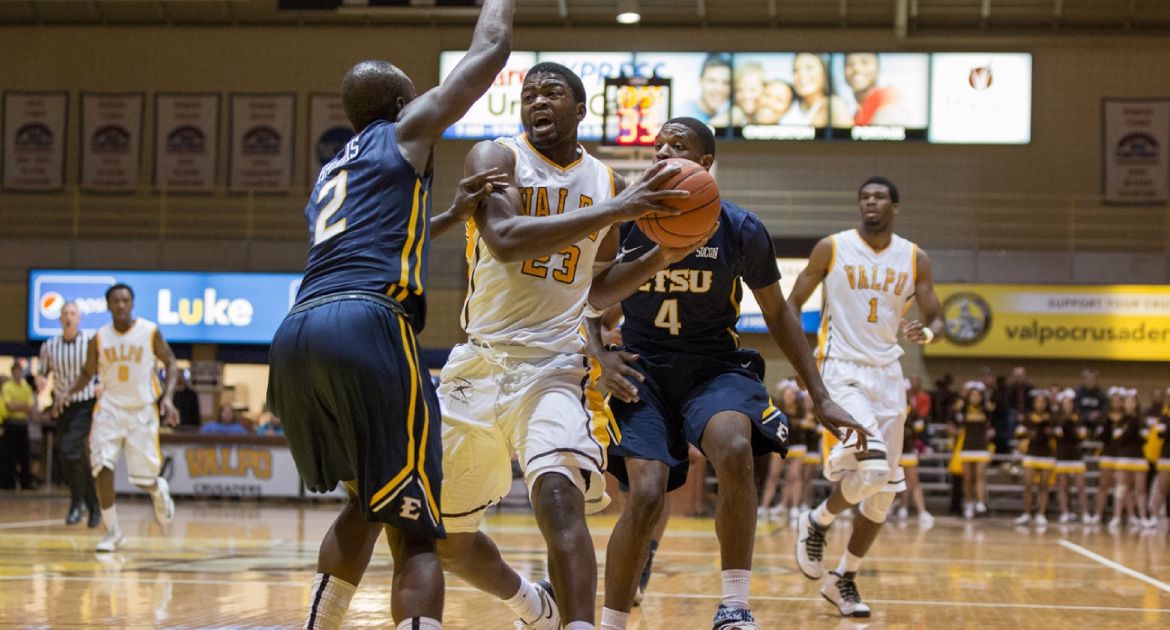 Next Up in Crusader Basketball: Valparaiso continues early-season play Wednesday evening at the ARC with a matchup against IU South Bend. The Crusaders are in search of their second consecutive home win.

Last Time Out: Valparaiso could not overcome 32.6% shooting on the road at Missouri Sunday evening in Columbia, Mo., as the Tigers downed the Crusaders by a 56-41 final. E. Victor Nickerson led Valpo in just his second game as a Crusader, pouring in 12 points off the bench, but no other Valpo player finished with more than seven points. The Tigers led by just one at the break, but out-scored Valpo 32-18 in the second half.

Head Coach Bryce Drew: Bryce Drew (67-37) is in his fourth season at the helm of the Crusader men's basketball program in 2014-15. In his first three years, Drew has led Valpo to 66 victories and postseason berths in each of his three seasons. The 2012 HL Coach of the Year, Drew ascended to the head coaching position on May 17, 2011 after spending six seasons as an assistant and associate head coach with the Crusaders.

Series Notes: Wednesday will be the fifth meeting in the all-time series between Valparaiso and IU South Bend, but the first under head coach Bryce Drew. Valpo has won all four previous meetings, including a 78-56 victory at the ARC in the most recent matchup on Nov. 19, 2009. Valpo trailed by three at the break in that game before outscoring the Titans 48-23 in the second half, as Brandon McPherson scored 19 of his career-best 25 points in the final 20 minutes. Two meetings ago, on Nov. 28, 2005, the Crusaders registered their second-largest margin of victory all time, beating IUSB 111-41.

@ValpoBasketball...
...and the @HorizonLeague
- @ValpoBasketball has been picked to finish in fourth place in the league standings in 2014-15 in preseason polling.
- The Crusaders have not finished worse than their preseason projection in the last four years.
- Sophomore Alec Peters was the lone underclassman on the preseason #HLMBB First Team All-League squad.

...looking back at last year
- @ValpoBasketball won 18 games and finished in fourth place in the #HLMBB regular season.
- The Crusaders advanced to the postseason for the fourth straight year, falling in the first round of the CIT to Columbia.
- Lavonte Dority was a First Team All-League selection and also earned All-Region honors.
- Alec Peters and Lexus Williams were both named to the league's All-Freshman Team.

...looking ahead
- @ValpoBasketball plays a pair of games at Central Michigan next weekend, taking on Arkansas-Pine Bluff on Friday and Maine on Sunday.
- The Crusaders then head to Nashville for the Challenge in Music City, where they play Drake, Murray State and Portland Nov. 28-30.

...at the ARC
- @ValpoBasketball has 14 regular season home games scheduled for the ARC in 2014-15. #ValpoGameday
- The Crusaders posted a 12-6 mark at the ARC last season.
- Valpo opened the home slate with a win over ETSU, the tenth consecutive year the Crusaders have won their home opener.
- Over the last 20+ years, @ValpoBasketball owns a 236-56 (.808) record on its home court.

Lots of New Faces
- Nearly half of the @ValpoBasketball roster (6 of 14 players) is new to the program this season.
- Five players are eligible for the first time this season, including Charlotte transfer E. Victor Nickerson, who sat out at Valpo last year.
- Darien Walker came to Valpo from junior college, while Max Joseph, David Skara and Tevonn Walker are all true freshmen.
- Shane Hammink (LSU) and Chandler Levingston Simon (UMKC) both transferred to Valpo last off-season and have to sit out this year.

The International Flavor
- This year’s squad continues the international pipeline that @ValpoBasketball has cultivated over the past two decades.
- The Crusaders boast five international players on this year’s roster from four different countries.
- Represented are Canada (Joseph, T. Walker), Croatia (Skara), Jamaica (Fernandez) and Netherlands (Hammink).
- The duo from Canada mark the first Canadian players in program history.
- Over the past two decades, @ValpoBasketball has welcomed 31 international players from 18 different countries.
- Crusader signee Daniel Relvao is from Portugal and will become the first Portugese player in program history when he joins in 2015-16.

In the Crusaders’ Future
- Daniel Relvao and Derrik Smits have both signed NLIs to join @ValpoBasketball as freshmen for the 2015-16 campaign.
- Relvao (6’9”, 235 lbs.) hails from Coimbra, Portugal and currently plays prep ball at Mountain Mission [Va.] School.
- Relvao averaged 8.2 ppg, 5.2 rpg and 3.3 bpg for Portugal last summer in Division B of the FIBA U18 World Championship.
- Smits (7’0”, 230 lbs.) will join Valpo from Zionsville [Ind.] H.S., where he averaged in double figures last season & also posted 3.6 rpg and 1.8 bpg.
- Smits is the son of former Indiana Pacers star center Rik Smits.

Alec Peters
- Peters tied for game-high honors with 27 points in the season-opening win over ETSU.
- Peters went 9-of-15 from the field, hit four 3-pointers and grabbed six rebounds in the win over the Buccaneers.
- Peters was a preseason First Team All-League selection after earning All-Freshman team honors last year as a rookie.
- Peters averaged 12.7 ppg and 4.8 rpg last year, becoming the highest-scoring Valpo freshman since 1998-99.
- A four-time #HLMBB Freshman of the Week, Peters also grabbed the most rebounds by a Valpo freshman since 1999-2000.
- Peters led the Crusaders in scoring 12 times in 2013-14 and in rebounding on nine occasions.
- Peters finished his freshman year tenth in the league in field goal percentage, 3-point percentage and 3-pointers/game.
- Peters scored 30 points twice as a rookie, only the fifth Crusader to score 30 or more twice in a career in the last two decades.
- Peters paced the Crusaders in scoring in eight of the season's final ten games.

Keith Carter
- Carter has registered seven assists against just two turnovers in the Crusaders’ first two games in 2014-15.
- Carter appeared in each of the final 22 games of the 2013-14 season after becoming eligible, averaging 5.7 ppg and 2.3 apg.
- Carter connected at a 40% clip from 3-point range in his first year as a Crusader.
- Carter scored in double figures three times last year, including a career-best 19 points in come-from-behind win over UIC.
- Carter handed out at least four assists on six occasions, including a season-best six assists against Youngstown State.
- Carter, a former Illinois Mr. Basketball runner-up, came to Valpo after spending the first half of his freshman year at Saint Louis.

Jubril Adekoya
- Adekoya tallied eight points and grabbed six rebounds in the season-opening win over ETSU.
- Adekoya appeared in all 34 games as a rookie for Valpo in 2013-14, starting 24 times and averaging 5.8 points and 3.4 rebounds per game.
- Adekoya shot at a 63.6% clip from inside the 3-point line on the season.
- Adekoya led the Crusaders in rebounding four times and scored in double figures on seven occasions.
- Adekoya scored a season-high 13 points at Youngstown State and pulled down a season-best nine rebounds at Detroit.

Nick Davidson
- Davidson came off the bench to play five minutes in Valpo's exhibition win over GVSU.
- Davidson appeared in 14 games off the bench as a freshman, going for seven points and five assists in a win over Cincinnati Christian.
- Davidson was the area Player of the Year following his senior year at Andrean [Ind.] H.S.

E. Victor Nickerson
- Nickerson paced Valpo with 12 points (4-5 FG, 3-3 FT) off the bench last time out at Missouri.
- Nickerson sat out last season after transferring to Valpo from Charlotte.
- Nickerson appeared in 60 games for Charlotte over his first two years, starting 15 times as a sophomore.
- Nickerson was an Honorable Mention All-State selection as a senior in HS, helping lead Norcross to Georgia 5A state title.

David Skara
- Skara scored in double figures off the bench in the season opener vs. ETSU, going for 11 points and five rebounds in just 15 minutes.
- Skara spent last season at Midwest Elite Prep (Ind.) Academy, averaging 16 points and eight rebounds per game for the Warriors.
- Skara represented Croatia at the 2012 FIBA U17 World Championship, helping team to the bronze medal.
- Skara appeared in four games at that tournament, recording ten points and five rebounds in a win over South Korea.

Darien Walker
- Walker scored 20 points in the season-opening win over ETSU, including 5-of-7 from 3-point range.
- Walker scored 14 of his points against the Buccaneers in the first half, including four triples.
- Walker spent last season at John A. Logan College, where he averaged 13.4 ppg and was a First Team All-Region 24 selection.
- Walker played as a freshman at Arizona Western College, registering 11.1 ppg and 4.4 rpg.
- Walker helped Chicago powerhouse Simeon H.S. to back-to-back Illiois 4A state titles.

Tevonn Walker
- Walker made his Crusader debut in the season opener against East Tennessee State, starting and playing a team-high 32 minutes.
- Walker finished with 16 points, including a perfect 8-8 from the foul line, and also handed out three assists without a turnover.
- Walker was an All-Canadian selection as a senior and ranked as high as eighth in his class nationally.
- Walker was league Player of the Year as a senior at Vanier College, leading the league and ranking 14th nationally with 20.8 ppg.

Lexus Williams
- Williams is expected to miss the entire season after suffering an offseason knee injury.
- Williams was a Horizon League All-Freshman Team selection as a rookie last year.
- Williams appeared in all 34 games for the Crusaders as a freshman, averaging 6.5 ppg and 2.4 apg.
- Williams led the team as a freshman with 35 steals.
- Williams scored in double figures eight times, including a career-best 22 points in a win at Detroit.