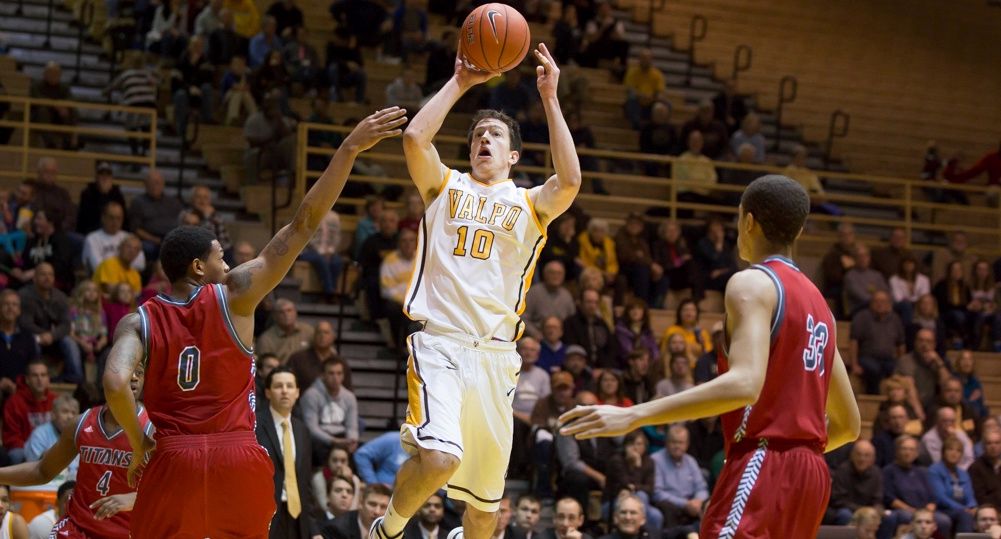 Valparaiso placed six players in double figures on Wednesday evening at the ARC as the Crusaders rolled to a 91-55 victory over IU South Bend.

Leading the way for the Crusaders on Wednesday was freshman David Skara (Zadar, Croatia/Ekonomska Skola Zadar), who scored 17 points on 6-of-9 shooting in the winning effort.  Skara added five rebounds and also handed out a game-high six assists without committing a turnover.

Sophomore Alec Peters (Washington, Ill./Washington) poured in 14 points in just 17 minutes of action as he went 5-of-7 from the floor, while also grabbing five rebounds.  Senior Vashil Fernandez (Kingston, Jamaica/Princeton Day [Md.] Academy) picked up his third career double-double, scoring 13 points on 4-of-6 shooting and 5-of-6 from the foul line.  Fernandez pulled down a game-best ten rebounds as well, six of which came on the offensive end, and tallied three of the Crusaders’ six blocked shots.

Rounding out the group of six in double figures were a trio of players with ten points.  Junior Keith Carter (Maywood, Ill./Proviso East [Saint Louis]) went 4-of-5 from the field for his ten points and added five rebounds, while fellow junior Darien Walker (Chicago, Ill./Simeon [John A. Logan/Arizona Western]) chipped in ten points and six rebounds off the bench.  Freshman Tevonn Walker (Montreal, Quebec/Vanier College) added ten points as well on 4-of-6 shooting.

Valpo shot 54.7% (35-of-64) from the floor on Wednesday and hit 10-of-24 from behind the 3-point line.  The Crusaders enjoyed a tremendous edge on the glass, out-rebounding IUSB by a 50-22 margin – including 18 offensive rebounds which they converted into 27 second-chance points.  Valpo also dominated in the paint, holding a 40-18 edge inside over the Titans, and got 49 points from its bench.

IUSB held a brief early lead, but the Crusaders claimed the lead for good on a mid-range jumper from Carter with 18:10 to play in the first half.  Valpo took control in a four-minute stretch midway through the first half, as leading 14-7, the Crusaders posted a 14-0 run, jump-started by back-to-back dunks from Darien Walker, to go ahead 28-7 with 10:11 to go in the period.  The lead never fell under double figures the rest of the way, and reached as much as 22 points in the first half before the Crusaders eventually took a 47-29 edge into halftime.

Valpo left no doubt with the start to the second half, scoring the first 11 points – five of which came from Tevonn Walker – over the opening four minutes of the stanza to push the lead to 58-29.  The lead grew to as high as 42 points as the Crusaders cruised to the win.

Oosha Mitchell led IU South Bend, an NAIA Division II program which was playing the game as an exhibition, with 12 points, while Jacob Foster added 10 points.  The Titans shot just 33.9% from the floor, but did match the Crusaders with ten triples.

Valparaiso (2-1) returns to action at the Central Michigan Tournament this weekend in Mount Pleasant, Mich.  The weekend event kicks off for the Crusaders Friday afternoon at 3:30 p.m. CT against Arkansas-Pine Bluff.  As always, the game can be heard on the Valpo Sports Radio Network, with links for live audio and stats available at ValpoAthletics.com.