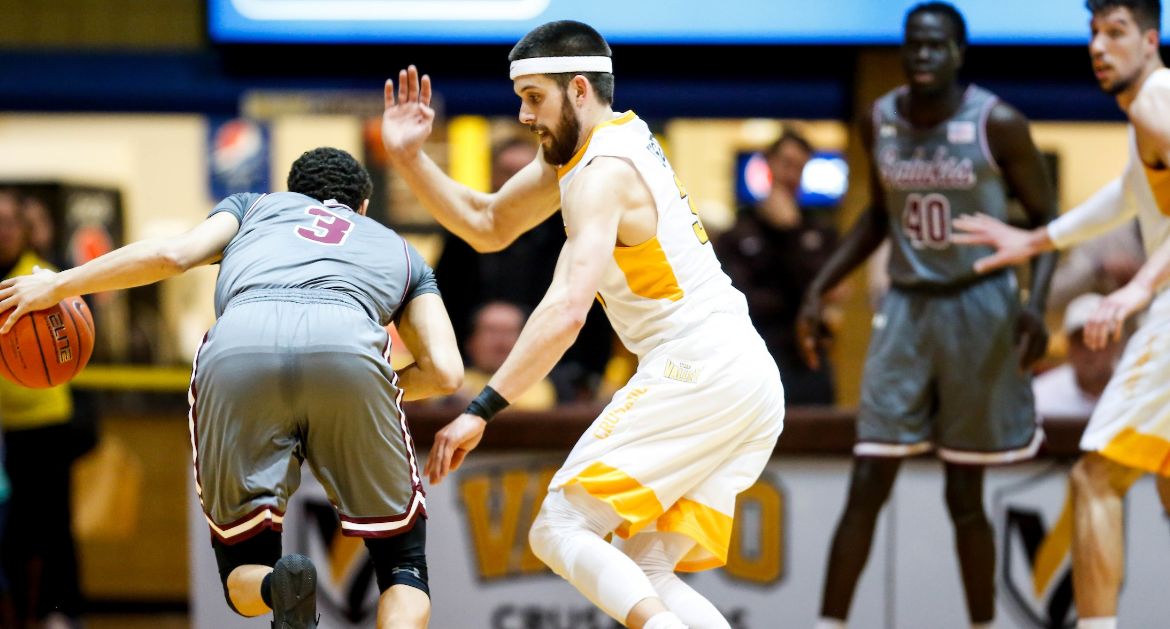 Next Up in Valpo Basketball: The penultimate regular season contest for the Valparaiso University men’s basketball team is on the docket for Wednesday evening, as Valpo heads to Peoria, Ill. to face Bradley. A win would give Valpo a season sweep of the Braves.

Last Time Out: Valpo erased most of a second-half double-digit deficit, but could never claim the lead, as UNI eventually pulled away for a 64-53 victory over Valpo Saturday evening in Cedar Falls, Iowa. Javon Freeman led Valpo with 11 points and three steals, while Derrik Smits added 10 points as well.

Head Coach Matt Lottich: Matt Lottich (53-41) is in his sixth season overall at Valpo and third as head coach in 2018-19. Lottich led Valpo to 15 victories in his second season in charge in 2017-18 and guided the the program through the transition to the MVC, which ended the campaign ranked eighth nationally in conference RPI. In his first year as head coach, Lottich guided Valpo to its fifth Horizon League regular season championship in the last six years as he led the team to 24 wins and an at-large berth into the NIT.

Series Notes: Despite being located just three hours apart, there is very little history between Valpo and Bradley. The two programs have met just six times, three of which came in a four-season stretch in the early 1980’s before the series resumed last season as Valpo joined the MVC. The series is tied 3-3, with both squads defending their repsective home courts three times. Earlier this season, Valpo earned a 61-50 victory over the Braves at the ARC, led by 17 points from Javon Freeman, as well as nine points and eight rebounds from Markus Golder.

...in the loss at UNI
- Valpo trailed by as many as 10 in the first half and was down 30-23 at the half.
- UNI got a 3-point play on its first possession of the second half to lead 33-23, but Valpo would outscore the Panthers 12-4 over the next seven-plus minutes to cut its deficit to two points.
- Trailing by one with seven minutes to play, Valpo had a shot to take the lead, but it came up short and the Panthers came down and immediately hit a 3-pointer. The triple sparked a 10-2 UNI run over the next 2:30 as the Panthers led 53-44 with 3:58 to play.
- Valpo would get no closer than six points down the stretch.
- The teams’ shooting was the floor was nearly identical, as Valpo hit 22-of-50 (44.0%) and UNI hit 21-of-48 (43.8%). Both squads went 5-of-15 from 3-point range as well.
- The difference in the game came at the foul line and in taking care of the basketball. UNI finished the night 15-of-17 from the charity stripe, while Valpo was just 6-of-10.
- Meanwhile, the Crusaders turned the ball over 16 times to lead to 15 UNI points. On the flip side, the Panthers committed just 12 turnovers and Valpo converted those into just eight points.
- The loss was Valpo’s 13th in as many games all-time in Cedar Falls, as the Crusaders have never beaten the Panthers on their home court.

...in the win over Southern Illinois
- SIU led 28-24 at the half, but Valpo scored nine straight points over the first four-plua minutes of the half to take a 33-28 lead.
- SIU regained the lead at 42-40 with 9:24 to play before Valpo scored the next eight to go up 48-42 with seven minutes remaining.
- SIU drew to within three points as the clock ticked towards four minutes to play, but Deion Lavender took over at that point, scoring on three straight trips for a personal 6-0 spurt to give Valpo a 55-46 advantage with 2:07 to play.
- SIU would rally at the free throw line, however, getting 10 free throw attempts in a span of 52 seconds while Valpo had the ball just twice – a missed shot and a turnover. SIU would go just 6-of-10 from the line in that stretch, cutting Valpo’s advantage to 55-52.
- SIU had two shots to tie in the final 10 seconds, but missed both, and the Salukis’ final full-court inbounds pass was intercepted by Lavender to secure the win.
- With the win, Valpo snapped a four-game home losing streak. The victory was also the seventh for Valpo in MVC play this season, surpassing last year’s total of six.
- Valpo shot just 43.1% for the game and was just 3-of-11 from the 3-point line, but did connect at a 54.5% clip from the field in the second half.
- Meanwhile, the Crusaders limited SIU to 38.8% shooting for the game and a 4-of-15 mark from 3-point range.
- Valpo also forced 19 SIU turnovers, which resulted in 21 points on the offensive end.

@BradleyUMBB
- Bradley enters Wednesday night at 16-13 overall on the year and 8-8 in MVC play.
- The Braves are tied for fifth place in the conference standings and have won five of their last six games.
- Darrell Brown leads Bradley, averaging 15.1 ppg on the year, while Elijah Childs adds 12.2 points and 8.1 rebounds per game.

The Conference Race
- Through 16 of 18 conference game, Valpo currently sits in eighth place, but is just one game out of the three-way tie for fifth.
- Wins in each of its last two games would guarantee Valpo a top-six seed thanks to owning tiebreakers over Illinois State, Southern Illinois, and (with a win Wednesday) Bradley.
- On the flip side, with a loss Wednesday, Valpo would be unable to garner any better than the seventh seed.
- Staying out of the bottom four is key, as the seven through ten seeds have to play on Thursday at Arch Madness and win four games as opposed to three to win the tournament.

Lavender Steps Up
- Approaching the final games of his collegiate career, Deion Lavender has enjoyed some of his best performances over the last few outings.
- Lavender is averaging 12.6 points per game over the last five games, highlighted by back-to-back 16-point efforts - his highest scoring output in a Valpo uniform.
- Over these last five games, Lavender is connecting at a 61% clip from the field and also averaging 5.4 rebounds/game.
- Lavender has scored in double figures in four of those five games after reaching the 10-point mark just four times in his first 24 games at Valpo.
- This year’s stretch somewhat mirrors a similar end of the season Lavender enjoyed his freshman year at SIU, where he averaged 11.2 points/game over the season’s final 10 games and scored in double figures seven times.

Record Book Watch
- Three Crusaders are making their mark on Valpo’s record books this year.
- Junior Jaume Sorolla has blocked 27 shots this year, giving him 89 career blocked shots through three years - eighth-most in program history and just one shy of Morris Smith for seventh position.
- Junior Derrik Smits is just nine field goal attempts shy of the minimum 500 needed to qualify for Valpo’s career field goal percentage chart - his current clip of 56.4% over his first three years would rank third in program history.
- Smits is shooting at a 59.7% mark from the field this season, a percentage which would be seventh-best on Valpo’s single-season chart should he maintain it for the duration.
- Freshman Javon Freeman broke Valpo’s freshman record for steals in a season earlier this year at Drake. With 56 steals on the year, Freeman is currently tied with Stalin Ortiz’s 2002-03 campaign for sixth in a single season in program history. He is just seven steals shy of Lubos Barton’s single-season record of 63, set in 2001-02.

Leading the League
- Not only is Javon Freeman on track to threaten Valpo’s single-season steals mark, he also currently paces the Missouri Valley Conference with 1.9 steals/game.
- Freeman would become the first Valpo freshman to lead a conference in one of the five major statistical categories, and would also become the first Valpo player since at least 1982 to pace the conference in steals.
- Alec Peters was the last Valpo player to lead a league in a major stat category, leading the Horizon League in both scoring (23.0 ppg) and rebounding (10.0 rpg) in 2016-17.
- Vashil Fernandez was the last to post a league-best block total, averaging 3.3 bpg to lead the Horizon League in 2015-16.
- Since 1982, no Valpo player has led their conference in assists or steals.

Freeman Feats
- Javon Freeman was named MVC Newcomer of the Week on Feb. 11 after averaging 22 points per game on 66.7% shooting over the previous two games.
- Freeman’s week was highlighted by a 27-point effort on 11-of-13 shooting at Illinois State, a game which included a 20-point first half.
- Freeman grabbed 15 rebounds in Valpo’s home game against Missouri State, becoming the shortest Valpo player in at least 30 years with a 15-board effort.
- Freeman opened his career with five straight double-figure scoring efforts, the only Valpo freshman to do so in the last 30 years - only two others had even scored in double figures in three straight to open their careers.
- Freeman scored 22 in his debut, the highest-scoring debut by a freshman since Lubos Barton scored 27 in 1998.

Shooting - The Highs and the Lows
- The difference in Valpo’s 3-point shooting in wins versus losses this year is striking - in its 13 victories, Valpo is hitting 40% from the 3-point line, while in its 14 losses, Valpo is shooting just 26% from deep.
- Valpo has hit better than 33% from 3-point range in a loss just twice this season and is averaging just 4.4 3-pointers/game in defeats.
- Meanwhile,Valpo has enjoyed a number of strong shooting performances in wins, including a 15-of-27 effort from deep in its win at George Washington, a 12-of-24 performance in the win at Missouri State, and most recently a 10-of-23 mark in the win at Illinois State.
- The 15 triples at GW were the program’s highest total against a Division I opponent since going 15-of-26 from deep in a Feb. 5, 2013 win over UIC.

Buzzer Beaters
- Markus Golder’s 50-foot buzzer-beater for the win Jan. 2 against Illinois State added to the lore of last-second shots in Valpo history.
- It was Valpo’s first game-winner with the clock at zero since Ryan Broekhoff connected on a 3-pointer to give Valpo the 70-69 win in the 2013 Horizon League semifinal at the ARC over Green Bay.
- It was Valpo’s first game-winner from beyond halfcourt since Greg Tonagel drilled a heave from the opposite 3-point line for a 71-68 win over Belmont at the ARC on Jan. 11, 1999.
- Of course, the most famous buzzer-beater in program history came courtesy of Bryce Drew in the first round of the 1998 NCAA Tournament versus Ole Miss.
- Golder’s shot came in at the top spot on SportsCenter’s Top 10 that night.