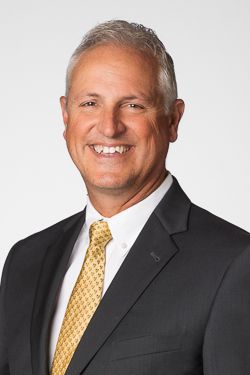 The 2021-22 campaign was a historic one for Valpo men’s golf, as Gring led the team to a 292.76 team scoring average that shattered the modern program record. Gring led freshman Anthony Delisanti to Missouri Valley Conference individual medalist honors and an NCAA Regional berth. In addition, he instructed junior Caleb VanArragon, who shattered his own program record for single-season scoring average en route to Elite 17 and MVC Scholar of the Year honors.

Gring’s 2021-22 team completed the season with 11 top-5 team finishes in 13 tournaments including finishing as the runner-up at the MVC Championship. In total, Valpo boasted seven top-2 team finishes (six runners-up and one team championship) and the team had four individual runner-up finishes and four individual medalist honors. Gring coached seven players to MVC Golfer of the Week honors including three different players in the month of March.

Valpo set the program’s 36-hole tournament scoring record by 20 strokes with a team score of 560 at the Twin Oaks Intercollegiate and posted a 54-hole team score of 855 at the Valpo Fall Invitational that ranks second in the program record book. Gring led his team to the second-best 18-hole round in program history, a 278 (-6) in the first round of the Twin Oaks Intercollegiate on March 22.

For the second straight season in 2020-21, Gring coached his group to a team championship as Valpo won the Lewis Flyer Intercollegiate, a 13-team event that took place in September. The Brown & Gold closed out the regular season with three straight top-three finishes, placing third of 18 at Twins Oaks, third of 11 at Butler and second of 17 at Wright State prior to a fourth-place finish in the MVC Championship.

The team cracked the program record book several times over the course of the 2018-19 season, which was Valpo’s second as a member of the Missouri Valley Conference. Valpo set the program record for 36-hole tournament low at the Butler Spring Invitational on April 1-2, carding a 580. Gring’s squad followed that up with the second-best 36-hole score in program history by stroking a 582 at the Wright State Invitational from April 14-15. Both performances also ranked in the Top 10 in program history in 36-hole tournament low in relation to par. Under Gring’s guidance, sophomore Jack Juskow cracked the program record book with an 18-hole round of 67 (t-6th all-time) at the Wright State Invitational on April 15 to finish the event with a 141, the second-best 36-hole score in program history.

The individuals under Gring’s tutelage have also enjoyed success over his tenure. In that time, numerous players have earned individual medalist honors at tournaments, including Thomas Wettstein claiming the individual title at the Horizon League Championship in 2013. In addition, numerous individuals have picked up runner-up finishes over that time. At the league level, 12 Valpo athletes have earned all-league honors, while Peter Webb was tabbed the Horizon League Freshman of the Year in 2014 before going on to share the league’s Player of the Year award as a senior.