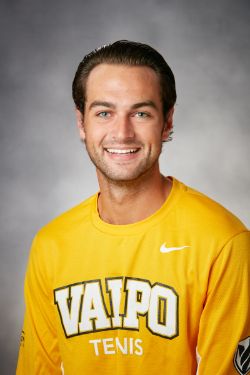 2014-15: Racked up 10 wins in singles play and a 13-6 record in doubles action in his junior campaign with Valpo...was victorious in his final eight singles matches of the season, including a win against Michigan State's Paul Heeder on Sept. 28th and Western Illinois' Jacob Sanders (Oct. 4)...teamed up with Dave Bacalla to hand Green Bay's Leo Gomez Islinger and Marius Merz an 8-4 defeat in doubles action at the Purdue Fall Invitational (Sept. 20)...went a perfect 3-0 with Kyle Dunn at the Valparaiso Fall Invitational (Oct. 3-4)...recorded victories in seven of his last eight doubles matches of the season, four of which came on the team's spring break trip to Orlando (Mar. 7-11).

2013-14: Won 16 doubles matches in his second season with the Brown and Gold, tied for 9th-most in a season in school history...won a pair of singles victories in the fall...played alongside Dave Bacalla at No. 1 doubles the entire spring where the duo claimed victories in 11 matches...carried a three-match winning streak on two different occasions during 2013-14.

2012-13: Won four singles matches and 13 doubles matches as a freshman including two over Western Illinois' Andrew Yopp in singles play...played No. 2 doubles alongside fifth-year senior Chris Baum for the entire spring...won three straight matches with Michael Baiocchi at the Valparaiso Fall Invitational.

Personal: Danny is the son of Mike and Suzanne Oakes...business management major.