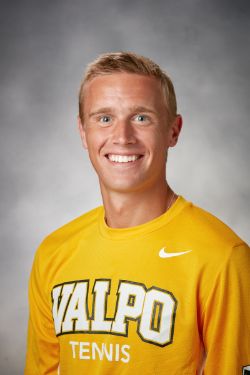 2014-15: Accumulated 12 singles wins and a remarkable 22 victories in doubles play in his junior season with the Crusaders...went 2-1 in singles and 4-1 in doubles alongside Michael Savaglio at the Purdue Fall Invitational (Sept. 19-21)...ran the table in singles play at the Valparaiso Fall Invitational while also going a perfect 3-0 in doubles (Oct. 3-4)...opened the spring with three consecutive wins in both singles and doubles, including a 7-5, 6-3 straight-set triumph over Toledo's Omar Espinosa (Jan. 24)...recorded a 3-1 mark in doubles play while on the team's spring break trip to Orlando...defeated Green Bay's Leo Gomez Islinger/Michael Tebon, 6-1, at No. 3 doubles with Garrett Gardner (Apr. 4)...was on the winning end of an 7-5, 2-6, 10-3 thriller versus Ismail Kadyrov of Detroit (Apr. 10)...closed out the regular season with an emphatic 6-1 win at No. 3 doubles over Youngstown State's Hugo Morth/Youssef Sherif...registered a 6-2 win at No. 3 doubles with Gardner versus Cleveland State's Jorg van der Vloet/Joe VanMeter in the semifinals of the Horizon League Championship on Apr. 25th.

2013-14: Claimed 14 singles victories and 12 doubles wins in his second season with the Brown and Gold...his .824 winning percentage in singles play was the second-highest in school history...closed out the season with wins in seven of his last eight matches...did not lose a singles match at home during the spring...teamed up with Eric Honert to win three out of four doubles matches on the spring trip.

2012-13: Won 12 singles matches and nine doubles matches as a freshman...claimed victories with Eric Honert at No. 1 doubles in three straight matches from Jan. 21st-26th.

Personal: Lucas is the son of Stephen and Susan Waak...business management major.