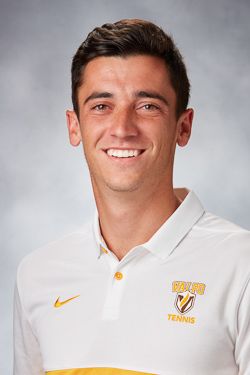 2018-19: Went 9-5 in singles play and 4-0 in dual matches… Finished with an 8-13 doubles record including 5-4 during the fall season… Won the Flight G Singles title at the Western Michigan Invitational on Sept. 23, topping Michigan State’s Billy Sishler 6-2, 6-1 in the final… Compiled a perfect 4-0 mark during the spring season with wins over Eastern Illinois, Hampton, Rollins and Omaha… Rallied from a set down to beat Omaha’s Ethan Henry 3-6, 6-2, 6-1 at No. 6 singles on April 13, his only Summit League match of the year.

2017-18: Member of a team that reached the league championship match for a fourth consecutive season… Finished his sophomore season with a 10-5 singles mark and a 9-11 record in doubles competition… Started the fall season on a seven-match singles winning streak with six of those victories coming in straight sets.

2016-17: Member of a team that won the Horizon League regular season and tournament titles, set the school record for wins with 23 and appeared in the NCAA Tournament... Finished his freshman campaign with an 11-3 mark... Went 9-2 in doubles competition... Won his collegiate debut on Sept. 16 against Chicago State's Gonzalo Martinez 6-3, 6-4 at the Duke James Bonk Invite... Picked up a win in his only Horizon League appearance, beating Wright State's Carlos Sanchez 6-0, 6-1 at No. 6 singles... His .786 singles winning percentage placed him in a tie for ninth in for best single-season winning percentage in Valpo history.

Prep: A four-year letter winner at Port Huron Northern High School in Michigan ... ranked a four-star recruit according to tennisrecruiting.net ... earned a 15th ranking in the Midwest region and 167th nationally ... a four-time regional champion ... received honorable mention All-State accolades his freshman season before earning All-State recognition each of the next three years ... played at No. 1 singles all four years while maintaining a 4.0 grade point average ... a four-year member of National Honor Society and student council.