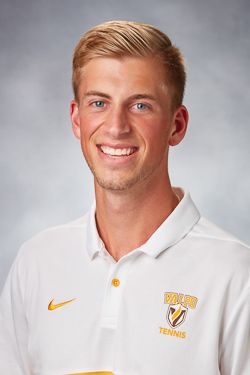 2018-19: Won Valpo’s fourth league player of the year award in a five-year span when he was named the Summit League Player of the Year while also grabbing a spot on the All-Summit Team… Was named Valparaiso University’s Male Athlete of the Year at the 2019 ARC Awards, an end-of-year awards banquet hosted by Valpo Athletics… Finished the season with a singles record of 23-6, tying his own win total from 2016-17 for 10th in single-season program history…Went 8-0 at No. 2 doubles, 15-4 in dual match play and 5-1 in league singles action… Enters his senior season with 61 career singles wins, already ninth on Valpo’s all-time list… His winning percentage of .793 was the 10th best in single-season program history… Enters his senior season with a career singles winning percentage of .649 that ranks seventh in program history and a doubles winning percentage of .694 that ranks fourth… Was a three-time Summit League Player of the Week… Won the Flight C singles title at the Western Michigan Invitational on Sept. 23… Paired with Kweisi Kenyatte to win Flight A Doubles at the Purdue Fall Invitational on Oct. 7… Qualified for the main draw of the ITA Midwest Regional hosted by Notre Dame and dropped a tight match to a Notre Dame player 1-6, 6-3, 7-6(3) on Oct. 20… Won his first Summit League Player of the Week Award on Feb. 12 after sweeping his match at first singles in a 6-1 win over Youngstown State on Feb.9. His victory came over Danylo Veremeichuk, a senior who was a First Team All-Horizon League selection the previous season… Won his second Summit League Player of the Week honor on March 12 after helping his team to a flawless 4-0 spring break trip to Florida. He went unbeaten for the week in both singles and doubles. One of his singles wins that week came over a player who was All-Ohio Valley Conference First Team in 2015-16 and All-Sunshine State Conference honorable mention in 2017-18, while another of his wins that week was a “double bagel” triumph as he won 6-0, 6-0 for the second time in his career… Made it three Summit League Player of the Week distinctions on April 2 when he was honored after a 7-6(5), 6-3 sweep of Illinois State’s Pol Rius Botifoll at No. 2 singles to help Valpo to a 5-2 victory over the Redbirds. He also earned a win at No. 1 doubles that week… Won 12 straight matches from Feb. 9 to March 30, a streak that featured four three-set wins including three where he rallied after dropping the opening set... At season's end, was named to the Summit League Academic All-League Team for the second straight season.

2017-18: Named to the 2017-18 Summit Academic Team for his performance on the court and in the classroom… Went 15-16 in singles matches and 19-11 in doubles competition… Posted a 4-1 record in Summit League doubles play… Finished his sophomore year with a .674 career doubles winning percentage, ranking fifth in program history… Was recognized as the Summit League Player of the Week on March 27 after playing a key role as the Crusaders defeated Illinois State for their first Summit League win. He came from behind to garner a victory at No. 3 singles while also taking part in the match that decided the doubles point in Valpo’s favor. That allowed Ancona to become the first weekly award winner in Valpo’s time as a Summit League affiliate member.

2016-17: Started as a freshman on a team that won the Horizon League regular season and tournament titles, set the school record for wins with 23 and appeared in the NCAA Tournament... Went 23-11 in singles play including a 16-6 dual mark and an unblemished 5-0 record in league play... Went 12-4 in doubles competition... His 23 wins in a single season rank 10th in program history... Beat Chicago State's Christian Gonzalez 7-5, 6-2 in his collegiate debut on Sept. 16 at the Duke James Bonk Invite... Picked up a 6-0, 6-0 win over Detroit Mercy's Chane Conley on April 24, the first match to finish in Valpo's 5-2 regular season championship-clinching victory over the Titans... Notched an important 6-4, 7-5 win over Youngstown State's Yossi Dahan in the first round of the Horizon League Tournament, helping the Crusaders top the Penguins 4-3 on April 29... Dropped his first career NCAA Tournament match 6-2, 6-4 to Michigan's Carter Lin on May 12 in Palo Alto, Calif.

Prep: Carried a 119th national ranking according to tennisrecruiting.net, in addition to three-star status ... was ranked second overall in the state of Illinois and eighth in the Great Lakes region ... a 2015 Midwest Open champion in doubles ... in singles play, he claimed a Northern Illinois B18s Qualifying championship ... a third team All-State selection in the spring of 2015 ... qualified for the state tournament every year at Rockford Christian.