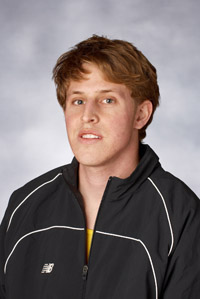 2008: Posted a score of 2,799 points in the heptathlon indoors at the HL Championships ... registered fastest Crusader time outdoors in the 400m dash (57.98, Ted Haydon Invitational) ... tallied second-best Valpo effort in the javelin throw outdoors as well (132’0”, HL Championships) ... also competed in the hurdles and jumps for the Crusaders as a junior ... named to the HL Academic Honor Roll for the spring 2008 semester.

2007: Competed in 11 meets for Valpo last season ... ran season-best times of 24.94 in the 200m dash and 54.33 in the 400m dash at the Boilermaker Invitational during indoor season ... registered toss of 130'10" in the javelin throw at the Mike Poehlein Invitational, third-best by a Crusader athlete on the season ... recorded 4,163 points in the decathlon at Mid-Con Outdoor Championship.

Personal: Dustin is the son of Chip and Cynthia Lawrence ... majors are political science and new media ... born February 24, 1986.