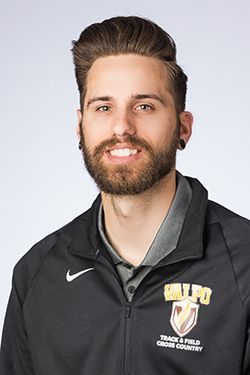 Vincent Walker was hired as the head coach of the Valparaiso University men’s and women’s cross country programs and the distance coach for the track & field programs in April 2022. He was elevated to Interim Director of Track & Field and Cross Country in July 2022.

Walker’s first cross country season at the helm in 2022 saw the Valpo men boast the best NCAA Regional finish in program history, placing 18th of 29 at the annual event in Terre Haute. During that event, five Valpo men cracked the program record book in the 10K, with Walker’s 2022 group accounting for five of the seven best 10K times in program lore. The Bradley Pink Classic marked another highlight, when four Beacons (three men in the 8K and one woman in the 6K) turned in all-time top-10 times, including the second and third fastest 8K performances in Valpo men’s cross country history.

Walker made an immediate impact on the distance group during the 2022 track & field season. His first spring with the team culminated with Ignacio Veloz Bonilla placing third in the 1,500-meter run at the Puerto Rico National Championships.

Walker came to Valpo after gaining experience in the Big Ten Conference at the University of Minnesota, where he had served as an assistant cross country and track & field coach since 2018. He began his coaching career in the Missouri Valley Conference, where he was part of the cross country and track & field staffs at his alma mater, Southern Illinois University, from 2016 to 2018.