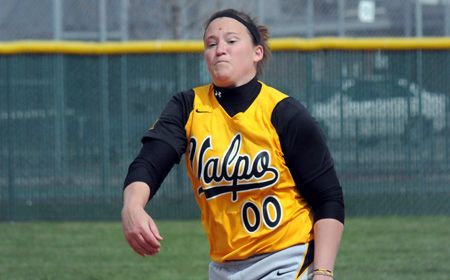 Valparaiso sophomore pitcher Alex Lagesse (Beecher, Ill./Beecher) has been named ‘The People’s Choice’ this week on the Horizon League Network, and is spotlighted in the featured video on the HLN website via phone interview.

Lagesse becomes the first Crusader softball player to earn ‘The People’s Choice’ honor, which is a weekly segment on HLN that allows fans to choose which athlete they believed had the most outstanding week among the Horizon League’s Athletes of the Week.  Voting is open from Monday around noon through Tuesday afternoon each week, with an interview with the winner posted on HLN Thursday afternoon.

Lagesse earned Horizon League Pitcher of the Week honors last week, her second straight accolade and third of the season, after tossing nine shutout innings over three appearances, including two victories.  In the interview with HLN’s Damon Lewis, Lagesse talks about the work she and the rest of the team put in over the offseason to enjoy the success the Crusaders have had to date, as well as how having a well-rounded pitching staff has helped the team.  They also look ahead to the Crusaders’ upcoming slate of games.