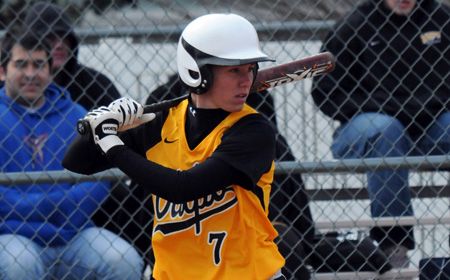 Valparaiso opened play at #2/3 Florida's Lipton Invitational in Gainesville, Fla. Friday with a pair of games, earning a split of the two contests.  The Crusaders began the day with a quick 8-0 five-inning win over North Dakota State before competing well with the top-five host Gators, as only one big inning was the difference in a 13-4 Valpo loss.

Valpo did much of its damage in the opener after two were away, as junior Sara Strickland (Scottsdale, Ariz./Horizon) led off the game with a single, but back-to-back fielders choices forced the lead runners and left a runner on first with two outs.  Junior Jordan Rutkowski (Alden, N.Y./Alden) drew a full-count walk to keep the inning alive, and senior KC Boldt (Red Wing, Minn./Red Wing) followed with her second home run of the season, a three-run shot to straightaway center field.

The runs would keep coming for the Crusaders, as sophomore Tori Brown (Harrison, Ohio/Harrison) drew a full-count walk of her own and was promptly plated by a double from senior Sadie Conner (Washington, Ill./Washington).  Conner found herself crossing the plate just one pitch later as well, as junior Kelsey Phalen (Batavia, Ill./Batavia) delivered an RBI single to cap a five-run first inning.

“We took control from the first pitch and managed to do all our damage in that first inning with two outs,” said Crusader head coach Jordan Stevens.  “It was good to see us come out with that energy in the first inning coming off of two tough losses.”

The Crusaders added on to their lead in the second inning, as Rutkowski was hit by a pitch with one out and stole second, a stolen base that proved to be meaningless as Boldt connected on her first career triple to plate the junior.  Then the coup de grâce came in the fourth frame with Boldt and Brown in scoring position when Conner stepped up to bat and tallied her second two-bagger of the ballgame to score both runners and set Valpo up for the run-rule victory.

With the Valpo offense clicking on all cylinders, junior Alex Lagesse (Beecher, Ill./Beecher) stood out as well in the circle, improving to 3-3 on the year with a two-hitter.  Lagesse did not allow a runner into scoring position after the second inning against the Bison.  North Dakota State (6-10) starter Randi Parks fell to 3-3 on the year, surrendering four runs in just 0.2 innings of work.

Boldt, Conner and Strickland each delivered two hits apiece to lead the Crusaders in the opener.  Boldt, Brown and Rutkowski all scored four runs, while Boldt drove in four runs and Conner picked up three RBIs.

“We just played a great all-around game in the first game,” said Stevens.  “We were able to chase their pitcher early, swung the bats well, played good defense and got a good pitching performance from Alex.  It was a good win for us against a quality North Dakota State program.”

The Crusaders struck first in the nightcap as well against the second-seeded Gators, as starter Sam McGee (Bloomington, Minn./Jefferson) set down Florida in the first inning.  Then Valpo, batting as the home team, got a leadoff walk from Strickland and a bunt single by sophomore Hayley Bridwell (Lemont, Ill./Lemont) to start off its first time at-bat.  A sacrifice bunt put both batters into scoring position, and Rutkowski delivered a double to left-center to stake Valpo to a 2-0 lead.

But errors in the field would haunt Valpo in the second inning, allowing Florida to put eight runs on the board.  The Gators led off the frame with a home run from Brittany Schutte, who would connect on a three-run shot later in the frame.  Leading 2-1 with the bases loaded and none out, a throwing error allowed Florida to score two runs to take the lead.  Later in the inning, an infield single was compounded by another throwing miscue which put two more runs on the Gators' ledger, followed by Schutte's second home run of the inning as Florida took an 8-2 lead.

“We just had a 20 minute lapse in the field in that second inning,” said Stevens.  “It doesn't matter who you do it against, when you walk a lot of batters and commit errors, it's going to be a long inning.  We gave them that one inning and put ourselves in a hole.  If you take that big inning away, which is tough to do because big innings are a part of the game, we actually played a pretty good game.”

Valpo wouldn't give in to the Gators, however, striking back in the third as Conner led off the inning with a double.  The Crusaders eventually loaded the bases with one out and Bridwell came through with a walk to score Conner.  Valpo's third run forced Florida into its bullpen to staff ace Stephanie Brombacher, who allowed the Crusaders no further runs in the third.

“To be able to force Florida to bring in one of the best pitchers in the country was a compliment to our offense,” said Stevens.  “For them to bring in an All-American to shut our offense down, that's big.  I'm still not big on moral victories, but that was a positive for our side.  I was really happy with the way we swung the bats today in both games.  While the score will show we lost by nine runs to Florida, we really played a good game for the most part.”

The Gators added three runs in the third to increase their lead to 11-3 and set themselves up for a run-rule win, but it wouldn't be that easy, as sophomore Jessie Marinec (Alsip, Ill./Marist) led off the bottom of the fifth with a first-pitch home run to cut the deficit to seven runs.  That would be as close as Valpo would get, however, as Florida scored two in its half of the seventh to close the scoring.

McGee took the loss for Valpo, giving up three runs in her one-plus inning of work to fall to 3-2.  Lagesse was tagged with five runs, all unearned, in two-thirds of an inning, while redshirt sophomore Amanda Bolton (Scottsdale, Ariz./Horizon [Arizona]) and junior Shaleigh Jansen (Ottawa, Ill./Ottawa Township) each tossed 2.2 innings.  Brombacher improved to 9-0, striking out 10 batters in her 5.2 innings of work.

Valparaiso (6-7) plays a pair of early games on Saturday, taking the field against Gardner-Webb at 7:30 a.m. CST and following with a showdown against Pacific, which is receiving votes in the national polls, at 9:45 a.m.  Live stats for both games can be found at www.valpoathletics.com.