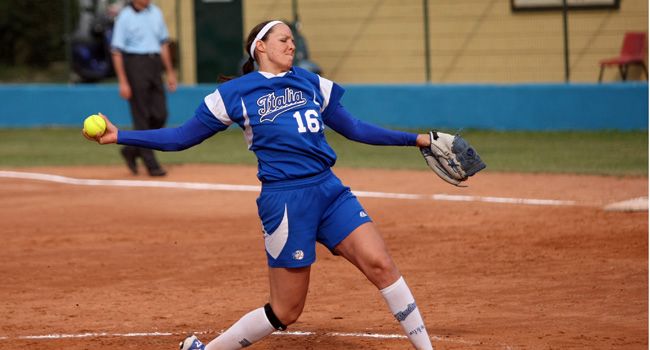 Valparaiso softball head coach Jordan Stevens announced today that Leslie Malerich, who pitched Merrillville H.S. to the 1997 IHSAA state title and went on to play for the Italian national team, most notably in the 2004 Olympics, has joined the Crusader coaching staff as an assistant coach.  Stevens also announced that former Crusader KC Boldt will return as a graduate assistant as well.

“Leslie is a well-respected private and college coach who brings with her a wealth of playing experience at the highest of levels,” said Stevens.  “Her experiences will be a tremendous asset to our pitching staff and our team as we continue to strive for our first Horizon League championship.  I'm very pleased to welcome someone with her proven abilities into our program.”

A local product, Malerich tossed a one-hit shutout over Carmel in the state championship game to give Merrillville the 1997 IHSAA softball championship.  She was named the NWI Times Female Athlete of the Year, as well as Softball Player of the Year, and eventually was inducted into the IHSAA Softball Hall of Fame in 2005.

Following her prep career, Malerich went on to a standout career at Florida State from 1999-2002, where she still holds the Seminoles’ career wins (107), appearances (179) and innings pitched (988.2) records, as well as single-season marks in wins and appearances.  A three-time All-American, Malerich led the Seminoles to the Women’s College World Series in 2002, getting named to the WCWS All-Tournament Team after earning Regional MVP honors.  The ACC Player of the Year as a junior in 2001, Malerich also earned a spot on the ACC 50th Anniversary Team.

Malerich played for the Italian national team from 2002-2009, highlighted by an appearance in the 2004 Olympics.  She also helped pitched Italy to three European titles, and was team MVP at the 2009 European Championships.  Malerich also played professionally in Italy for two years with Crocetta Parma and seven years with Fiorini Forli, helping the latter squad to two league titles and two European titles while being named an All-Star three times.  She also pitched for the Stratford [Conn.] Brakettes ASA team for five years as well.

Malerich also brings with her coaching experience at the Division I level, as she served as an assistant coach at Quinnipiac during the 2006 and 2007 seasons.  In addition, she spent three years as a high school assistant and also has worked numerous clinics, as well as giving private lessons for the last ten years.

“I was always big on being a team player, knowing that one person is too small to make a difference,” said Malerich.  “With that said, I am very much looking forward to joining Jordan Stevens and the entire Crusader family.  They are making it possible for my experience as a player to be shared with the young ladies, just like other coaches shared with me during my playing days.  It is a privilege and an honor for me to be involved in this program that is committed to helping the athletes grow on and off the field.  I can’t wait to begin this new journey!"

“I'm excited to have KC joining our staff,” said Stevens.  “She is an intelligent, organized and hard-working person, and those skills will transfer well into her new role.  Having a former player that knows the program will be very beneficial to us as we move forward.”