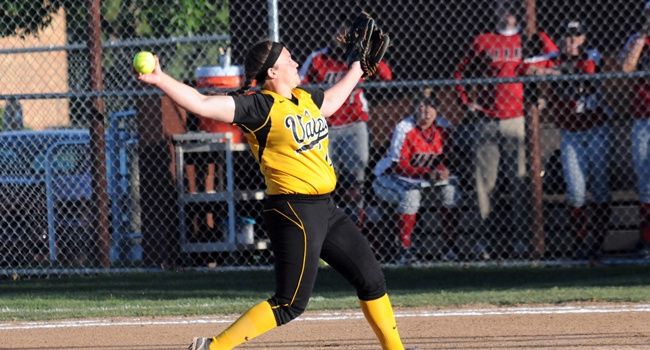 Alex Lagesse was one of three Crusaders to earn the academic honor from the league office. (Ray Acevedo)

Angie Doerffler (Fort Wayne, Ind./Concordia Lutheran), Alex Lagesse (Beecher, Ill./Beecher) and Jordan Rutkowski (Alden, N.Y./Alden) represented the Valparaiso softball team on the Horizon League Academic All-League squad for their work on the field and in the classroom during the 2012 season.

Doerffler earns the honor after a sophomore season in which she hit .272 with 38 runs scored. She placed seventh in the league in runs, sixth in walks (24) and second in assists (150), and capped the year by earning Horizon League Tournament MVP honors after picking up a pair of walk-off hits to help Valpo secure the tournament championship. Doerffler, who carries a 3.713 GPA as a political science and mathematics double major, has earned Valpo Presidential academic honors and has been named to the Horizon League Academic Honor Roll.

Lagesse receives the honor after earning First Team All-HL and All-Tournament Team accolades in 2012. The senior set a new school record with 22 wins while posting a 2.06 ERA and picking up 168 strikeouts, second-most in a single year in program history. Her 22 victories also led the league, while she finished second in the league in ERA and third in opponent batting average against (.221). Lagesse, who carried a 3.314 GPA as a sports management major, earned Presidential academic honors and was named to the Horizon League Academic Honor Roll during her time at Valpo.

Rutkowski earns the honor after her record-breaking senior season. The Crusader catcher registered nine new Valpo single-season records, including a .430 batting average, 14 home runs and 62 RBIs. Rutkowski, who finished among the league's top-two in nine different categories, was a First Team All-HL and an All-Tournament Team honoree and was one of 25 finalists for the USA Softball Collegiate Player of the Year. Rutkowski, who carried a 3.312 GPA as an art – graphic design major, earned Presidential academic honors and was named to the Horizon League Academic Honor Roll during her time at Valpo.