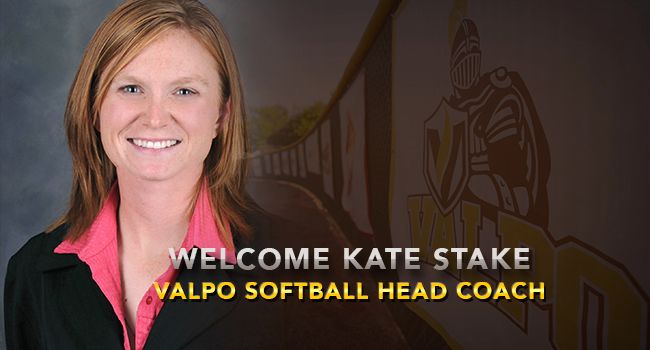 Valparaiso University director of athletics Mark LaBarbera announced today that Kate Stake has been hired as the new head coach of the Crusader softball program.  Stake comes to Valpo with eight seasons of assistant coaching experience at the Division I level, most recently serving as an assistant at mid-major power Hofstra.

“Kate Stake has the qualities we look for in head coaches,” said LaBarbera.  “She was a successful student-athlete, she has been a part of championship programs, and she has played for and coached with some of the most distinguished coaches in college softball.  She has a strong commitment to student-athlete experience as well.  We are excited to have her joining the Valpo Athletics family as the leader of our softball program.”

"First and foremost, I want to thank Mark [LaBarbera] and [associate A.D.] Stephen [Anthony] for giving me this opportunity, and to all the members of the search committee for being so welcoming and such good ambassadors for the department and this university,” said Stake.  “I've known from the beginning of this process that Valpo is a special place, and I'm so very excited and humbled to be a part of it.  The Midwest is home to me, and I'm thrilled to be coming back, but I want to acknowledge how important and rewarding my time on the East Coast has been. In particular, I'm so fortunate to have spent the past two years at Hofstra – Bill [Edwards], Larissa [Anderson] and Addie [Clark] have been invaluable colleagues, and I certainly would not be the coach I am today if it weren't for their mentorship, friendship and support.”

Stake spent two seasons on the coaching staff at Hofstra, working under NFCA Hall of Fame head coach Bill Edwards and helping the Pride to a combined 81 wins over her two years.  The 2014 squad went 35-14 and earned an at-large bid to the NCAA Tournament, finishing the season ranked #33 in RPI.  Eight members of the Pride were named NFCA All-Region honorees this past season as well.

In her first season, Stake was part of the NFCA Northeast Region Coaching Staff of the Year which led Hofstra to a 46-13 record as the Pride won regular season and conference tournament championships.  Hofstra ended the 2013 campaign ranked #19 in RPI and #25 nationally in the NFCA/USA Today poll, and advanced to the NCAA regional title game.  In both of Stake’s seasons with the Pride, Hofstra hit better than .300 and had six regulars hit above the .300 mark.

Prior to her time at Hofstra, Stake spent three seasons as an assistant coach at the United States Military Academy, working primarily with the infielders and serving as the hitting coach.  During her time at Army, the program set new single-season records for wins, conference wins, hits and total bases, while in Stake’s final season with the Black Knights, four players made the school's single-season top-10s in hits and RBIs and two players moved into the single-season top-10 in batting average.

Defensively, Stake helped the Black Knights post the Patriot League's top fielding percentage in 2011, while Army ranked second in the category in 2010 and 2012 as well.  Over her three seasons, five infielders earned All-Conference accolades, including three First Team selections under her tutelage.

Before arriving at West Point, Stake served two years as a full-time assistant coach for Eastern Illinois after one season as a graduate assistant in 2007.  As the primary defensive instructor and first-base coach, Stake also aided in recruiting, concentrating on the Midwest region. Off the field, she monitored the team's academic progress and helped coordinate fundraising efforts while also organizing the team's travel arrangements.

The Buffalo Grove, Ill. native earned Second Team All-American honors in 2005 and was a four-time All-Conference selection – including First Team accolades each of her final two years.  She was the recipient of the Linda Herman Female Scholar-Athlete of the Year at Illinois State, the school’s highest academic award given to a student-athlete, and was an Academic All-American as well.  In the classroom, Stake earned a bachelor's degree in English education from Illinois State and a master's degree in kinesiology and sports studies from Eastern Illinois.

“I can't wait to meet my new team and get to work with Joy on preparing this year's team for the opportunity to earn a spot in the NCAA tournament, and on continuing to build this program into a consistently well-known, well-respected contender in the Midwest,” said Stake.  “I've spent the past decade standing on the shoulders of giants, and I'm ready to bring all that I've seen from up there to Valpo.”

What They’re Saying About Kate Stake

“Kate is a very good coach - one who has been mentored by some outstanding coaches and who has been at some great programs throughout her career.  She has really paid her dues, spending a lot of time preparing for this, and she is ready to become a head coach.  We are proud of what she brought to the Hofstra program, and with what she brings to the Valpo program, I know that Valpo will reap the benefits because they're getting a real top-notch coach in Kate.” – Bill Edwards, former Hofstra head coach and 2009 NFCA Hall of Fame inductee

“Kate has a tremendous passion for the sport of softball, and being named the head coach at Valparaiso University is a great opportunity and challenge for her as she moves into the next level of her professional career.  Kate is a consummate worker, and as a player was the first to arrive, the last to leave and the dirtiest when she finished practice.  Her leadership qualities, paired with her valuable experiences, will allow her to develop a style preparing her team for championship play.  She is a great teacher of technique fundamentals and her energy and enthusiasm will be contagious throughout her program.  Kate is also genuinely invested in the total student-athlete experience. I really look forward to watching Kate grow and develop the Valparaiso program.” – Melinda Fischer, Illinois State head coach and 2010 NFCA Hall of Fame inductee

“I'm happy for Kate as she is a thinker and a strategist and truly cares about her players.  She is a detailed-oriented person who's smart and adept at figuring things out on and off the field.  It's great to see hard-working Midwesterners take over great jobs in the Midwest, and I think Valpo is lucky to have Kate, with the experience she's gained as a player and in her coaching positions.” – Kim Schuette, former Eastern Illinois head coach and current Purdue head coach