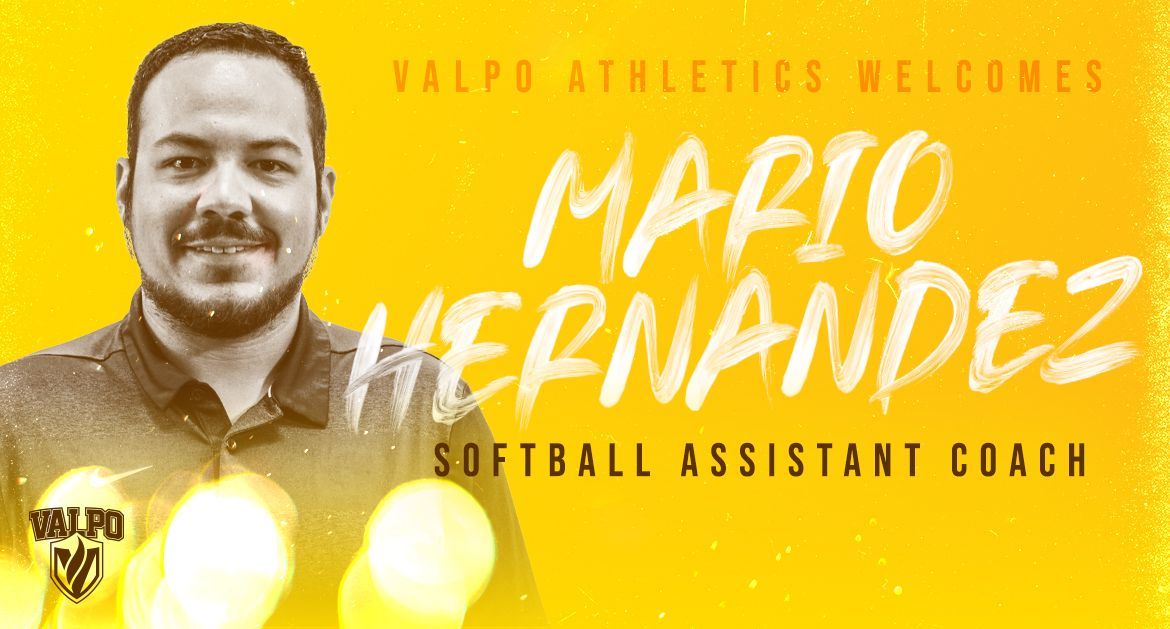 “Mario is the right fit, right now,” said Stake. “Call it a gut feeling or call it fate – either way, I believe Mario is supposed to be here with us this year. He’s a dream chaser, a do-whatever-it-takes-er. He’ll bring a sense of grit and determination to this program through his experience, and I’m confident he’s ready to take the reins of our offense and work with our team to battle our way to the top of the conference at the plate.”

Hernandez joins the Valpo program after most recently serving as head coach of the Manatee Squeeze in the inaugural summer softball season for the Florida Gulf Coast League this summer. Hernandez guided the Squeeze to a 17-6 record – good for second place in the regular season – and a berth in the league’s championship game. He also coached one of the league’s All-Star teams and was a member of the coaching staff for a team of league All-Stars against the USSSA Pride in a three-game series.

Hernandez spent the 2020 collegiate season on the staff at Jacksonville University as a volunteer assistant, assisting with the team’s hitting operations and working directly with the catchers. He helped lead the Dolphins to a 15-11 record and an RPI of 64. Prior to that, Hernandez was on the coaching staff at Plainfield North [Ill.] H.S. for the 2019 season.

“I'd like to first thank Jacksonville University and Erica Ayers for taking a chance on me last year and giving me the opportunity of a lifetime,” said Hernandez. “Unfortunately, our 2020 season was cut short, but it was still an amazing experience and I wish them nothing but the best next season. I am thrilled to get the chance to work along with Kate this year. Her hard work, determination, and vision for this program are unmatched. I've worked so hard for an opportunity like this for years, and I'm honored to get the chance to prove myself as a coach at the Division I level.”

Hernandez brings travel ball background with him as well. He spent six years (2014-2019) with the Illinois Hawks organization, serving as a head coach up to the 18U age group and eventually ascending to the position of President of Softball for the organization. Previously, Hernandez was a head coach for the Southside Rage baseball organization from 2012 through 2014.

“I didn’t know it at the jump, but Mario is tied to The Region,” said Stake. “That local connection makes him family in a way that’s unique, and I’m so happy to give him the opportunity to coach in his backyard.”

“I was born and raised in the south suburbs of Chicago and my father recently moved back to the area, so I am thrilled to move back closer to my family,” said Hernandez. “My goal is to develop our players to be the very best versions of themselves on and off the field, and I can't wait to get started. This is going to be a special year for this program!”

What They’re Saying About Mario Hernandez

“I couldn’t be more excited for Mario and his opportunity to impact the Valpo program. He relates to players, he has patience and has the ability to teach the game. I’m so thankful for the time and energy he poured into our program this past year. Valpo got a good one!”

“Mario’s work ethic is what first stood out to me. He has made many personal sacrifices in order to chase his dream of coaching collegiate softball and is sincerely grateful for each and every opportunity. Mario has an infectious personality and is passionate about the game. He will be a tremendous resource for Coach Stake and a ton of fun to work with!”

“Coach Mario has a bright future ahead of him. He is an up-and-coming coach who is invested in making his players better on and off the field - he is motivated to do the right thing and it will show. He will be ready for the challenge of the Division I ranks and I can’t wait to see his successes in the future.”