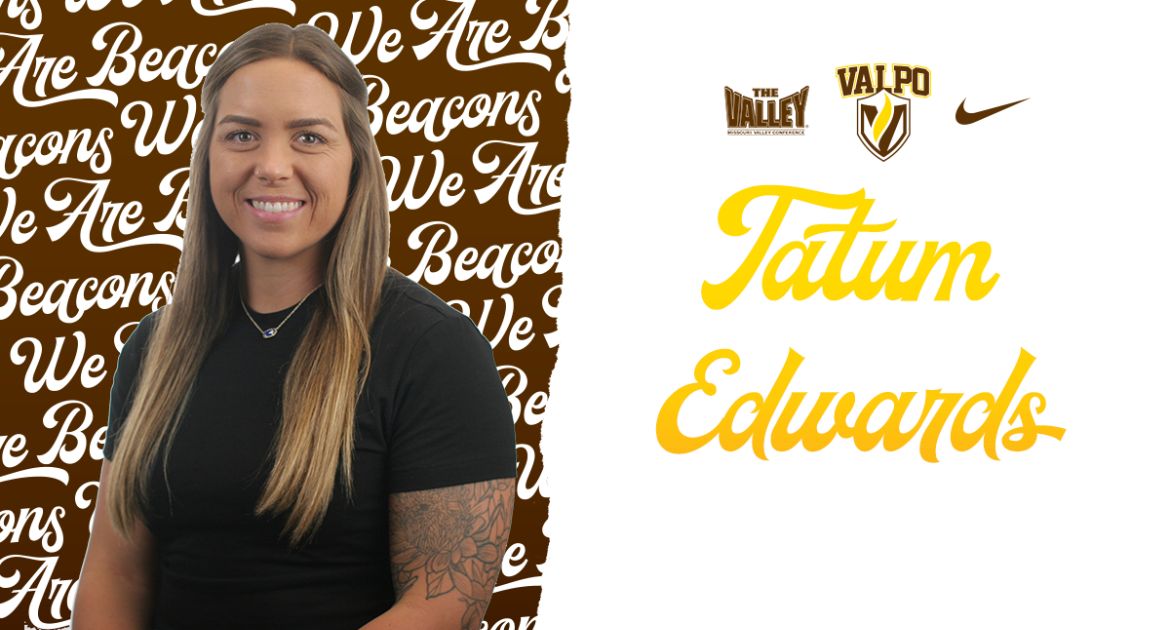 Valpo Softball head coach Amanda Eberhart announced today that Tatum Edwards has joined the program as associate head coach. An All-American during her collegiate playing career who went on to play three seasons of National Pro Fastpitch (NPF), Edwards comes to Valpo from Concordia University Nebraska, where she was head coach in 2022.

“I couldn’t be more excited to be a part of the Valpo Softball program and keep continuing to grow this game,” Edwards said. “Being back working with Riv means a lot to me. Who you surround yourself with is most important, and we have a great relationship with established trust. We complement each other well and I’m truly grateful to her for giving me this opportunity. Let’s get to work!”

Edwards led the Bulldogs to 23 wins during the 2022 season and guided a pair of All-Conference selections in her first season as a collegiate head coach.

Prior to assuming the head position at Concordia, Edwards spent three seasons (2019-2021) coaching alongside Eberhart as an assistant coach at Omaha. Edwards was instrumental in turning around the Mavs program, helping lead them to a second-place finish in Summit League regular season play and a runner-up finish at the league tournament in 2021.

“I’m so excited to be back working side-by-side with Tatum,” Eberhart said. “She has a proven record of making everyone around her better at the elite level. We have been in the trenches together and we understand what matters to help move Valpo Softball forward. I’m so excited for our student-athletes to be able to work with such a high-level competitive coach and player. Valpo Softball just got better, and I’m so blessed to have her as my wingman again!”

Edwards was a volunteer assistant at Purdue for the 2018 season after starting her foray into coaching with two seasons (2016-2017) as a graduate assistant at her alma mater, Nebraska.

Edwards stood out on the diamond for Nebraska during her playing days, twice earning All-America honors playing for 2010 NFCA Hall of Fame inductee Rhonda Revelle. A four-time All-Conference honoree and the 2013 Big Ten Pitcher of the Year, Edwards helped the Cornhuskers reach the Women’s College World Series as a junior in 2013 and a return trip to the NCAA Super Regionals in 2014. She ranks seventh in program history in victories, eighth in pitching strikeouts, fifth in home runs and sixth in RBIs.

“Tatum is one of the top rising stars among pitching coaches in the country,” Revelle said. “As a two-time All-American who pitched in the College World Series, she has been at the pinnacle as a pitcher. That experience, along with her track record of developing pitchers every place she has coached, makes for an impressive resume. It is a special day for these coaches to reconnect and join forces to lead Valpo to new heights.”

Following her collegiate career, Edwards made her way into NPF, playing in 2014 for the Pennsylvania Rebellion before heading to the Chicago Bandits for the 2015 and 2016 campaigns. She helped lead the Bandits to back-to-back league titles.

Edwards graduated from the University of Nebraska-Lincoln with a Bachelor of Science in Education and Human Services in 2015. She went on to earn a Master of Arts in Educational Administration in 2017.