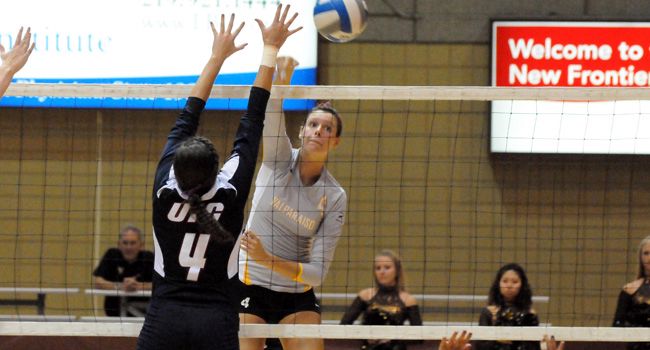 For the eighth time this season in Horizon League action, the Valparaiso volleyball team needed the minimum number of sets to dispatch of an opponent, as the Crusaders swept Youngstown State 3-0 (25-16, 25-23, 25-19) Friday evening in Youngstown, Ohio.

As has been the norm this season, it was a total team effort on the offensive side of the ball to get the job done.  Senior Katie Britton (Mishawaka, Ind./Marian) led the way with 10 kills on 21 swings, swinging at a.429 clip.  The senior got plenty of help, as five other Crusaders registered at least four kills as Valpo finished the night with 42 kills against just 16 errors.

Defensively, junior Taylor Root (Jenison, Mich./Jenison) paced all players with 14 digs, moving within eight digs of the second spot on Valpo’s all-time chart in the category despite still having a full season to play.  Senior Jenny Pokorny (Geneva, Ill./Geneva) added 11 digs to go along with 30 assists, her 16th double-double of the season.

An early four-point spurt in the opening set, featuring kills by Britton and sophomore Sarah Dooms (Greenwood, Ind./Center Grove) and a block from sophomore Ellen Vanden Berg (Little Chute, Wis./Little Chute) and redshirt freshman Lindsey Hauch (Coloma, Mich./Coloma), gave Valpo a lead it would not relinquish.  The Crusaders hit .395 in the opening frame with 18 kills and used a 5-1 run mid-set to gain separation and go ahead by a 15-10 score.  The Penguins would get no closer than four points the rest of the way, with a kill by Hauch eventually ending the opener in Valpo’s favor.

Valpo seemingly took control of the second set with an 8-2 run midway through the frame, bolstered by two kills apiece by freshman Morgan Beil (St. Louis, Mo./Marquette) and senior Amy Groesbeck (Winfield, Ill./Wheaton North), that erased a 13-11 deficit and made it a 19-15 Crusader lead.  In fact, another Groesbeck kill gave the Crusaders set point at 24-19 before YSU came storming back.  A kill, two Valpo attack errors and a service ace moved the Penguins within 24-23, but the Crusaders finally ended the frame on their fifth set point thanks to a YSU attack error, putting Valpo up 2-0 into the in-game break.

The third set featured numerous runs on both sides, with neither team able to side out at even a 50% clip in the finale.  But the Crusaders were the team able to put together the two most decisive runs of the set.  With YSU up 13-12, Valpo rolled off seven straight points, which included solo blocks by Pokorny and sophomore Janelle Hobbs (Hartland, Wis./Arrowhead) and a service ace by Hauch, to claim a 19-13 advantage.  Then, after the Penguins cut their deficit to 20-16, Valpo answered with four straight points, including two rejections by Beil and Pokorny.  A kill by Britton would close out the sweep, helping Valpo keep pace for third place in the Horizon League.

Valparaiso (18-11, 9-5 Horizon) looks to return home on a high note as the Crusaders take on second-place Cleveland State Saturday afternoon at 3 p.m. CDT.  Live video through the Horizon League Network and live stats will be available at www.valpoathletics.com.