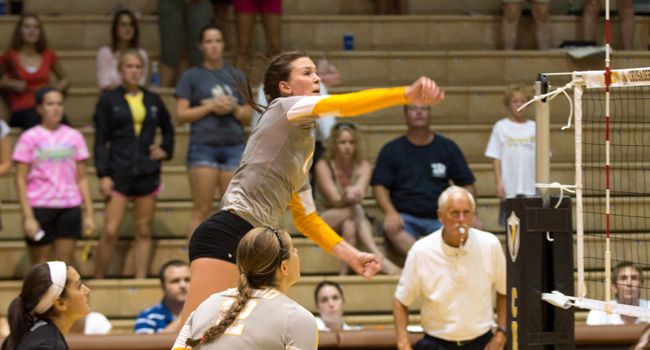 "I think any time in the Horizon League you can go on the road and get a win, with where the league is at right now, is a great win," said Crusader head coach Carin Avery. "It's hard to win on the road in league play, and to be able to do so in our first match was great. For the most part, we played some very good volleyball today."

Redshirt junior Kelsey Victor (Logansport, Ind./Logansport) and junior Morgan Beil (St. Louis, Mo./Marquette) opened the match with kills for Valpo, part of a 4-0 spurt to start the first set that gave the Crusaders a lead they wouldn't relinquish. UIC closed to within one point at 13-12, and following a mini-run by Valpo, drew back to within 21-18, but the Crusaders scored three straight on two Beil kills and a Flame error to make it 24-18. UIC scored the next two points, but senior Sarah Dooms (Greenwood, Ind./Center Grove) ended the opener with a kill to give Valpo the one-set lead.

UIC led briefly in the early stages of set two, but the Crusaders took the lead for good with a 5-1 run. The Flames tied the set at seven-all, but a 8-1 run gave Valpo control of the frame. The Crusaders were able to withstand four straight points by the Flames which cut the lead to 15-12, coming out of a timeout with five straight points and cruising into the in-game break from there.

The third set proved to be the only blip in the match for Valpo, as UIC gained control with a six-point spurt in the middle stages to force a fourth set. But in the eventual final frame, the Crusaders led start to finish, cementing their position with a 9-2 run over the middle portions of the set which pushed their lead to nine points. UIC closed to within 19-15, but Valpo allowed the Flames just one point the rest of the way in closing out the road win.

Freshman Morganne Longoria (Burlington, Wis./Burlington) led all players with 22 digs and also picked up two of Valpo's five service aces. Dooms chipped in 13 digs, while Campbell added 10 digs for her third double-double of the season. Victor matched her season high with seven blocks and Beil tied her season-best effort at the net with five rejections as the Crusaders registered 10 blocks as a team.

"I thought everybody did a very good job today," said Avery. "I don't think UIC could key on any one player, because we all played well. It was nice to see that if someone wasn't hitting well, they were blocking well, and vice versa. We've been really focusing on that - if you're struggling in one part of the game, make it up in a different part - and it was good to see our players doing that today. I also thought we served pretty well tonight. The last two weekends we've struggled to serve our opponents tough, and today it looked like we were back on track."

Sara Sternard led all players with 13 kills on .478 hitting, while Melissa Nava hit .435 with 11 kills and Kara Johnson added 10 kills for UIC (5-11, 0-1 Horizon). But the Crusaders also forced Johnson into 13 attack errors and held Casey Harris to a negative hitting percentage as well. MaryKate Imrie handed out 43 assists, and Justine Garcia paced the Flames with 15 digs.

Valparaiso (12-3, 1-0 Horizon) returns home for the first time in nearly a month next weekend, as the Crusaders host a pair of Horizon League matches. Valpo will welcome Green Bay on Friday evening before turning around to take on Milwaukee on Saturday afternoon. Both matches will have live stats, live audio (WVUR, 95.1 FM, Valparaiso) and live video (Horizon League Network) links available through ValpoAthletics.com.