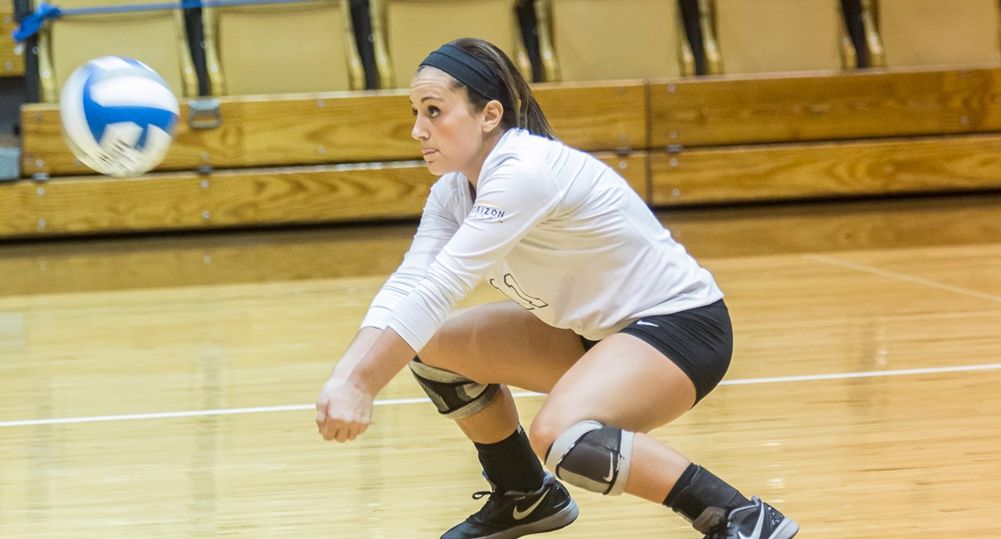 The Valparaiso volleyball team opened up Horizon League play the same way it has performed all season long, going on the road and sweeping Green Bay (25-20, 25-21, 25-23) Friday evening in Green Bay, Wis. for its 13th consecutive victory, matching the second-longest winning streak in program history.  The win was also the 300th for Crusader head coach Carin Avery in her time at Valpo.

The 13 straight wins matches a stretch the 2008 squad put together through October and November of that year for the second-longest string of victories all-time at Valpo.  Saturday afternoon, the Crusaders will have the opportunity to match the 2004 team, which currently holds the program’s longest winning streak at 14 straight matches.

As they have so often recently, the Crusaders came out with the win without dropping a set, as they have now lost just one set over their last nine matches.  But on Friday, Valpo had to do so by holding off rallies late from the Phoenix in every set.

“It was great to get a win tonight here in Green Bay,” said Crusader head coach Carin Avery.  “They had a great crowd this evening, and it was a fun environment to play in. We've had a tough time here in the past, so it was definitely nice to get the win.  We gave away a few too many runs tonight at the end of each set, but other than that, we really did some great things defensively.”

In the opening frame, the Crusaders pushed a 9-6 lead out to an 11-point advantage with a 12-4 run, seemingly taking control at 21-10.  But Green Bay rallied furiously, scoring nine of the next ten points to close to within 22-19.  Valpo went back to its offensive leader as the stakes grew, however, as sophomore Emily Campbell (Grand Rapids, Mich./Forest Hills Central) picked up back-to-back kills to earn set point at 24-19.  On their second chance, the Crusaders again went to Campbell for the termination to claim the opening set.

Trailing 10-9 approaching the midway point of set two, Valpo reeled off seven consecutive points – including three kills from Campbell and a kill and an ace by junior Kelsey Berrington (Britton, Mich./Tecumseh) – to go ahead 16-10.  With the lead still six points after the teams traded a pair of sideouts, Green Bay scored four straight to close to within 18-16.  But the Crusaders answered with three straight of their own and would not allow the Phoenix to move any closer than three points the rest of the way as they secured the second-set victory.

It was a massive run by the Crusaders at the midway point of the third set as well, as Valpo scored 11 points in a 14-point span to turn a 12-11 deficit into a 22-15 lead.  Just three points from the sweep, the Crusaders found themselves again having to fight off Green Bay, which put together a 7-1 spurt to move within 23-22.  Once again, it was a Campbell kill which stopped the Phoenix’s momentum, and on their second match point chance, Berrington hit senior Kelsey Victor (Logansport, Ind./Logansport) for a kill to close out the sweep.

Campbell dominated offensively for Valpo on Friday evening, registering a match-best 18 kills while swinging at a .400 clip.  Freshman Allison Ketcham (Mishawaka, Ind./Marian), coming off an MVP performance last weekend, added 11 kills while Victor chipped in nine kills on .533 hitting.   Berrington handed out 39 assists on the night.

The Crusaders were strong in the back row all night long, registering 62 digs, a season-high for a three-set match.  Leading the way was sophomore libero Morganne Longoria (Burlington, Wis./Burlington), who ended the sweep with 20 digs.  Behind her, three others had double figures in digs as they recorded double-doubles – Campbell tallied 12 digs, Ketcham 11 and Berrington 10.  At the net, Ketcham was in on four of the Crusaders’ six blocks.

Valparaiso (14-1, 1-0 Horizon) turns its attention to Milwaukee on Saturday, as the Crusaders attempt to win both ends of the Wisconsin road trip for just the second time since joining the Horizon League.  First serve is slated for 4 p.m., with live video via the Horizon League Network and live stats available at ValpoAthletics.com.