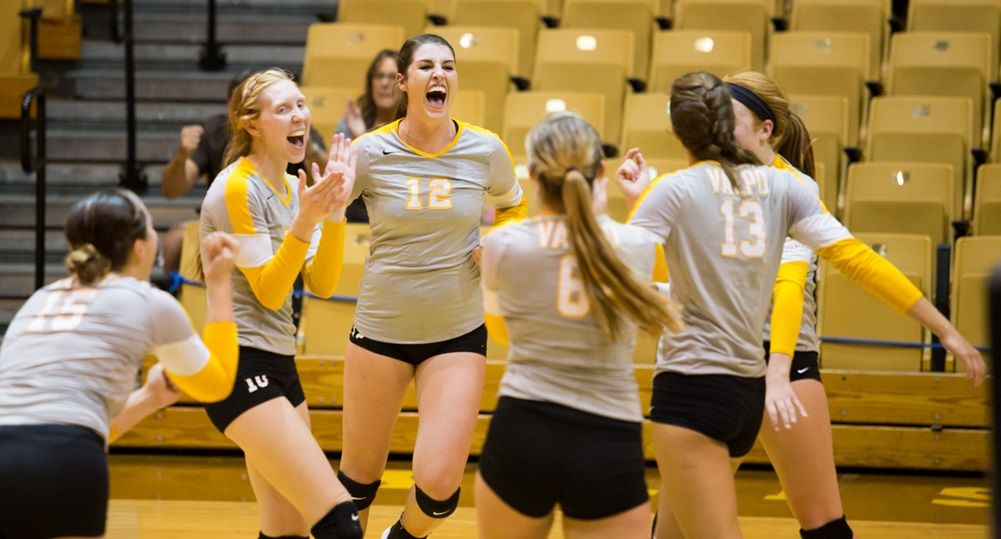 This Week in Crusader Volleyball: Valparaiso closes out the pre-league slate this weekend with the final of four in-season tournaments, making the trek downstate to Terre Haute to play in the ISU Classic. The Crusaders will conclude tournament play Saturday night against host Indiana State after taking on Chicago State and Western Illinois earlier in the weekend.

Previously: Valpo got back on the winning track Tuesday with a four-set win at the ARC over Toledo. The Crusaders took second place in their Popcorn Classic last weekend, sweeping Kennesaw State, Elon and Savannah State before falling to Loyola in the tournament championship match. Kelsey Berrington and Taylor Graboski represented Valpo on the All-Tournament Team.

Head Coach Carin Avery: In her 14th season as head coach at Valparaiso, Carin Avery has won 322 matches and has led Valpo to three league regular season and tournament titles, as well as three NCAA Tournament appearances. A two-time league Coach of the Year, Avery has coached 40 All-League recipients over her tenure as Crusader head coach. She is Valpo’s all-time leader in both victories and winning percentage, and owns 377 career victories overall as a head coach.

Series Notes: Chicago State – Valpo holds a 41-1 advantage in the all-time series over the Cougars. Most recently, the Crusaders won at CSU on Oct. 21, 2014 in straight sets. Rachel Bruinsma led Valpo with 12 kills on .310 hitting in that contest, while Kelsey Berrington tallied 35 assists and 10 digs.

Western Illinois – Former Mid-Continent Conference rivals, the Crusaders are 27-6 all-time against WIU, but the two squads have not matched up since Valpo departed for the Horizon League. The last meeting came in the semifinals of the Mid-Con Tournament in Tulsa, Okla. on Nov. 17, 2006, a 3-2 win for the Crusaders. Nicole Schulz (32 kills) and Sara Hughes (82 assists) set all-time program records in that victory.

Indiana State – Valpo trails the all-time series with Indiana State, 11-10, but has won all five meetings with the Sycamores under head coach Carin Avery. The most recent showdown came in Terre Haute on Sept. 7, 2010 – a 3-0 Crusader victory as Tara Diebler and Katie Britton posted 10 kills apiece, while Taylor Root tied for match-high honors with 21 digs.

Scouting the Opposition: Chicago State – The Cougars enter the weekend at 0-10 on the year and have already dropped matches against a pair of Horizon League squads – UIC and Green Bay – this season. CSU is led by junior outside Elli Woinowsky, who averages 2.72 kills/set.

Western Illinois – The Leathernecks have won each of their last two matches and are now 2-9 on the season. Peyton Crosser leads the way for WIU with 2.63 kills/set – the only player averaging multiple kills per game – while Kaili Simmons posts 3.39 digs/set.

Indiana State – The Sycamores, who wrap up an eight-match homestand this weekend, enter their second straight home tournament with an 8-4 record after taking three of four contests last weekend. Bree Spangler leads ISU with 2.85 kills/set, while Cassandra Willis paces the Sycamores in both hitting percentage (.374) and blocks/set (1.19).

Looking Back at 2014: Last season saw the Crusaders propel themselves out of the gate to start the season with the best start in program history, as Valpo opened the season with a 14-1 record en route to 25 victories. Valpo won three in-season tournament titles and earned 13 straight wins to match the second-longest winning streak in program history. Along the way, head coach Carin Avery won her 300th game as Valpo head coach. The Crusaders boasted the Horizon League co-Player of the Year and an Honorable Mention All-Region honoree in Emily Campbell - the program's first Player of the Year since 2008 - and also earned two other All-League and a pair of All-Freshman Team selections.

Best Start in Program History: While the Crusaders eventually suffered their first loss of the year last Saturday night against Loyola, the win earlier in the day over Savannah State secured the best start in Valpo volleyball history for this year’s squad. The Crusaders’ victory over the Lady Tigers improved their record to 9-0, surpassing the 2003 and 2013 teams, both of which started the year 8-0 before losing for the first time. Now, sitting at 10-1, the 2015 team will set its sights on last year’s squad, which started the season 14-1 before suffering its second loss.

Berrington Hits 3K: Early on in the Crusaders’ first match last weekend against Kennesaw State, senior setter Kelsey Berrington became just the fifth player in program history to surpass 3,000 career assists. Later on in the tournament, Berrington moved past Katie Bova (3,061 assists) for fourth all-time at Valpo in the category and currently sits with 3,117 career helpers. The senior is on pace to end her career third in Crusader history in assists.

Digging Deep: Junior libero Morganne Longoria has been the Crusaders’ starting libero since stepping on campus as a freshman, and finds herself already nearing a spot on Valpo’s all-time top-10 chart in the digs category. The preseason Horizon League Defensive Player of the Year, Longoria has tallied 144 digs on the season to push her career total to 1,219 digs – just 52 away from matching Laura Kulans for 10th-most in Crusader history.

Bringing Home the Hardware: The Crusaders have continued their tradition of filling up the ARC trophy cases in 2015, as the two titles this year at UT Chattanooga and St. Francis Brooklyn mark 21 in-season tournament titles in the 14-year tenure of head coach Carin Avery. With the victory at the Terrier Invitational, Valpo made it five consecutive in-season tournament championships dating back to last year - a new program record. Valpo has now brought home at least one in-season championship in 11 of the last 14 years as well, and this weekend will attempt to make it three tournament titles this season – a feat previously accomplished in 2006, 2010 and 2014.

In Search of 20 More Wins: The Valpo volleyball program is already halfway to extending an impressive streak this season. The Crusaders find themselves among a prestigious group of programs nationwide, as last year’s 25-win campaign was the 13th straight season the Crusaders captured at least 20 victories. Only 10 Division I volleyball programs have won at least 20 matches in each of the last 13 years, a group which includes Colorado State, Florida, Hawai'i, Nebraska, Ohio, Penn State, Stanford, UNI and Western Kentucky.