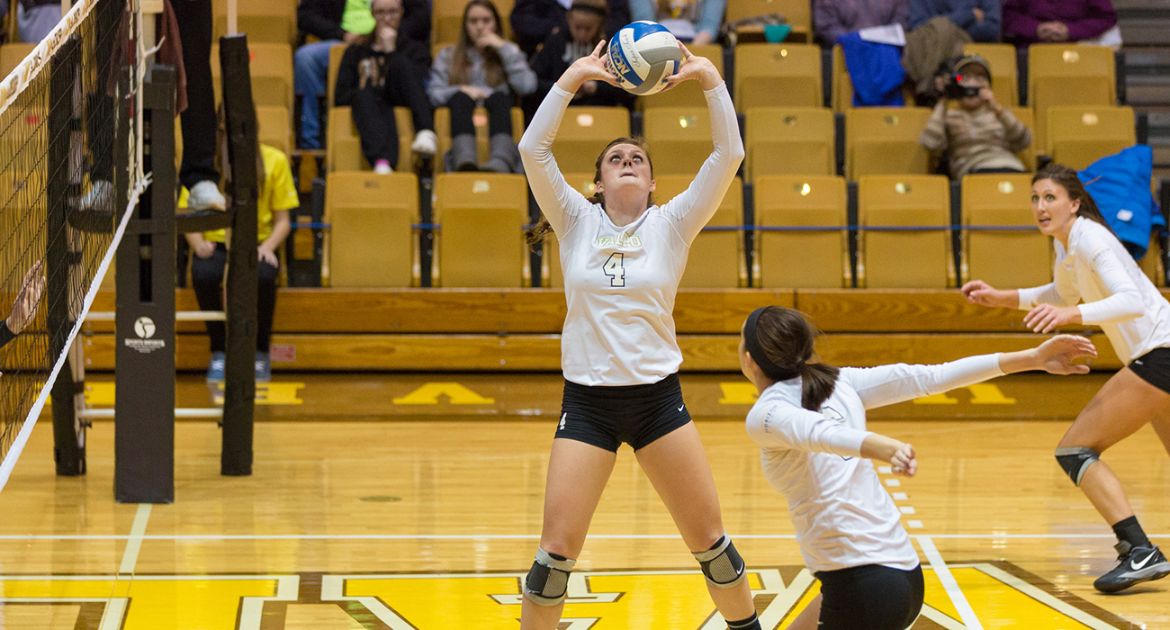 The Valparaiso University volleyball team proved to be an unwelcome guest in Northern Kentucky’s first-ever home event in Horizon League play in any sport, as the Crusaders defeated the Norse, 3-1 (25-15, 32-30, 20-25, 25-23) Friday night in Highland Heights, Ky.

The offense ran mainly through the Crusaders’ starting outside hitters on Friday, and the pair of junior Emily Campbell (Grand Rapids, Mich./Forest Hills Central) and sophomore Allison Ketcham (Mishawaka, Ind./Marian) both stepped up to the task. Campbell recorded a season-high 20 kills, 18 of which came in the first three frames. Meanwhile, Ketcham – who set a new career best last time out at Indiana State with 18 kills – matched that mark Friday evening against the Norse, tallying 18 terminations.

The first set came easy to the Crusaders, who went on an 11-3 run early in the frame and hit .400 en route to taking a one-set lead. But the second frame would be a dogfight. Valpo trailed late 21-14 before rallying to force extra points. The two squads proceeded to trade the lead in extra points, with both sides earning multiple set points along the way. Finally, at 30-30 following a kill from junior Jamie Lacheta (Warsaw, Ind./Warsaw), an NKU attack error gave Valpo another set point, and redshirt freshman Kayla Currier (Frankfort, Ill./Lincoln-Way East) put away an overpass to make it a 2-0 Crusader lead.

Valpo led 14-10 midway through set three in search of the sweep, but NKU utilized an 11-2 run to pull ahead and eventually force a fourth set. The fourth set proved to be tight throughout, as neither squad ever had better than a three-point lead. But with the score tied at 23-23, freshman Lizzie Zaleski (Oak Lawn, Ill./Marist) came up with a big kill from the right side to give the Crusaders match point and Valpo would close out the match thanks to a hitting error by the Norse.

Contributing to the production from the outside hitters Friday was freshman Katherine Carlson (Lake Orion, Mich./Notre Dame Prep), who made her first appearance of the night in the fourth set and tallied four kills on just six attacks. Sophomore Taylor Graboski (Upper Sandusky, Ohio/Upper Sandusky) added to the offensive attack with an efficient performance out of the middle, hitting .450 with 10 kills on 20 swings. Senior Kelsey Berrington (Britton, Mich./Tecumseh) dished out a season-best 52 assists in the win.

Defensively, Valpo kept plenty of rallies alive on Friday, and it was a team effort on the back line to do so. Notably, junior libero Morganne Longoria (Burlington, Wis./Burlington) recorded 22 digs, giving her 1,271 digs for her career and tying her for 10th-most in the category in a career in Crusader history. Berrington set a new career high and led Valpo with 23 digs, while both Ketcham (22 digs) and Campbell (12 digs) finished the night with double-doubles as well. Currier and Lacheta combined for four of Valpo’s six team blocks.

Northern Kentucky (5-8, 0-1 Horizon) was paced by 20 kills from Haley Libs. Jayden Julien posted a career-best 26 digs for the Norse to lead all players.

Valparaiso (13-2, 1-0 Horizon) looks to make it a perfect weekend to kick off Horizon League play on Saturday afternoon as the Crusaders complete the road trip at Wright State. First serve is slated for 3 p.m. CT, with live video and live stats available through ValpoAthletics.com.