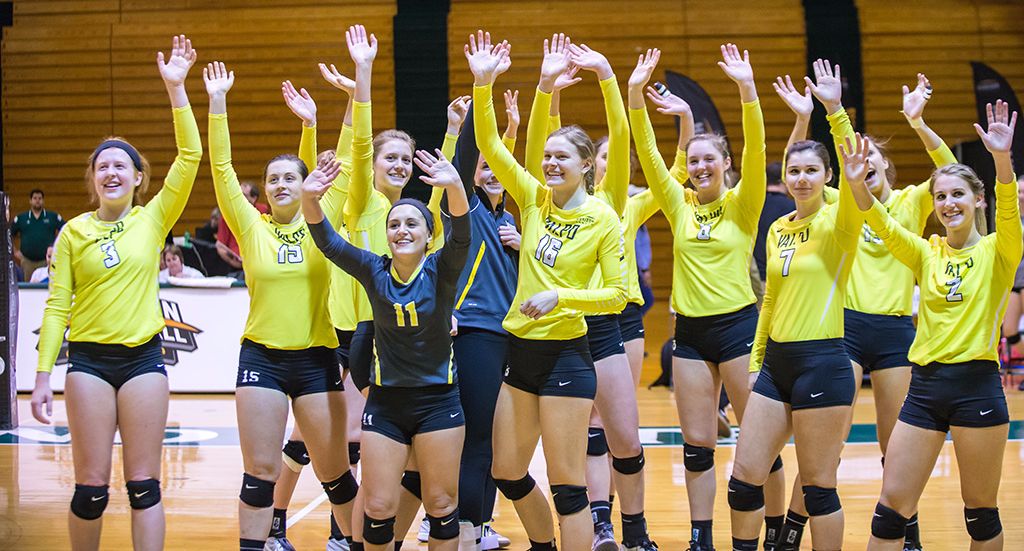 It was a gutsy performance by the Valparaiso University volleyball team on Friday afternoon in Cleveland, Ohio, as Valpo rallied from down two sets to one to take down Milwaukee, 3-2 (25-18, 20-25, 23-25, 25-17, 15-11) in the opening round of the Horizon League Championship. With the win, the third-seeded Crusaders will take on second-seeded Oakland in the semifinals Saturday at 4:30 p.m. CT.

Not only did the Crusaders have to rally to advance in the tournament, they had to do it without the services of All-League outside hitter Emily Campbell (Grand Rapids, Mich./Forest Hills Central), who was sidelined due to an injury she suffered last Saturday. But the entire Crusader team stepped up in her absence, led by sophomore Allison Ketcham (Mishawaka, Ind./Marion), who paced Valpo offensively with 21 kills on .391 hitting. Three other Crusaders finished in double figures in kills as well, as Valpo hit .283 for the match – its best hitting performance in a five-set match in six years.

“I thought we did a good job settling ourselves down during the match after going down two sets,” said Crusader head coach Carin Avery. “We came out playing to win, and not playing not to lose. We did a great job all night on the offensive side, and the last two sets we really picked up our blocking and defense.”

With a single race to 15 to extend the season on the line, the Crusaders spotted Milwaukee a pair of early two-point leads, but rallied both times, putting together a three-point spurt – including a block from Ketcham and freshman Sydney Bronner (Frankenmuth, Mich./Frankenmuth), and a kill by freshman Kayla Currier (Frankfort, Ill./Lincoln-Way East) – to pull ahead, 6-5. Milwaukee scored the next two points, but the Crusaders answered with two straight of their own on kills by Currier and freshman Katherine Carlson (Lake Orion, Mich./Notre Dame Prep) to hold an 8-7 edge at the changeover.

Milwaukee would tie the score twice more, but each time freshman Lizzie Zaleski (Oak Lawn, Ill./Marist) stepped up with a kill to keep the Crusaders on top. Following a Milwaukee timeout at 10-9, the Crusader offense continued to roll, as terminations by sophomore Taylor Graboski (Upper Sandusky, Ohio/Upper Sandusky) and Carlson made it 12-9 Valpo. After the teams traded sideouts, a kill from Ketcham gave Valpo match point at 14-10, and the sophomore would close the match with a kill on the Crusaders’ second opportunity.

Valpo pulled away in the first set with a 5-1 run, including a pair of blocks and a kill from Currier, to break a 12-12 tie and pull ahead, as the lead never fell under three points the rest of the way. The Crusaders looked in good shape to go up two sets to none following a kill by Zaleski which gave Valpo a 17-15 lead in set two, but Milwaukee scored eight of the next nine points to take control as the match went into the in-game break tied at one set apiece.

Milwaukee led 14-9 midway through set three before Valpo scored seven straight points – including two kills and a block by Currier – to go ahead, 16-14. The Crusaders’ lead was still two at 18-16, but the Panthers went on a 7-2 run to take a 23-20 lead. Valpo had a rally in it, as a kill from Graboski and back-to-back aces by Carlson tied the frame at 23-all, but back-to-back Crusader errors gave Milwaukee the set. Valpo led nearly start to finish in the fourth set to extend the match, using an early 9-1 run to go ahead 10-4, and then with the lead cut to two points later in the set, ending the frame on a 9-3 spurt.

Graboski picked up 13 kills on the day, while Currier posted 12 kills and Carlson 11 to round out the quartet in double figures. Senior Kelsey Berrington (Britton, Mich./Tecumseh) and sophomore Tarrah Lasky (Valparaiso, Ind./Valparaiso) split setting duties Friday, handing out 29 and 26 assists, respectively.

Valparaiso (26-7) looks to advance to the Horizon League championship match on Saturday with a semifinal matchup against Oakland. First serve is scheduled for 4:30 p.m. CT. The match can be seen live on ESPN3 and heard live on WVUR (95.1 FM, Valparaiso), with links for the live video, audio and stats available via ValpoAthletics.com.