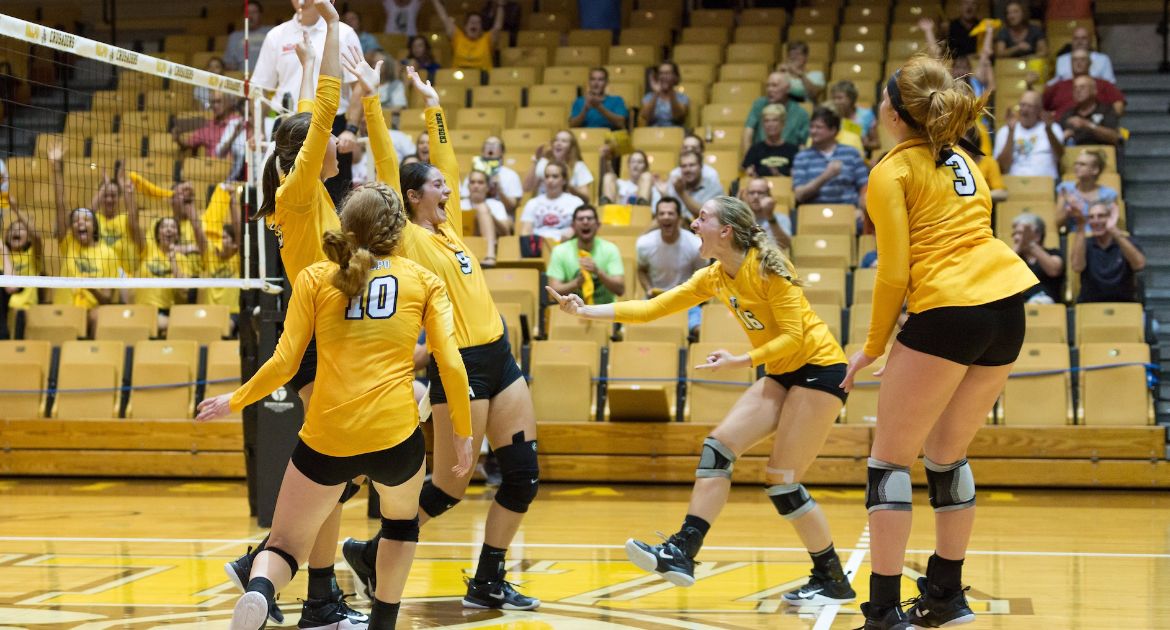 This Week in Crusader Volleyball: The Valparaiso University volleyball team heads to central Illinois this weekend to continue MVC play, playing at Bradley on Friday evening before heading to Illinois State on Saturday night.

Previously: The Crusaders earned their first win in Valley action on Sunday afternoon at Loyola, taking down the Ramblers in four sets.

Looking Ahead: Valpo returns to the ARC for a stretch of three matches in five days starting next weekend. The Crusaders will host Indiana State and Evansville on Oct. 13 and 14, respectively, in MVC competition before stepping out of conference play to host Fort Wayne on Oct. 17.

Following the Crusaders: Both matches this weekend will be broadcast live on The Valley On ESPN3, on WatchESPN and the ESPN app. The matches will also have live stats available through ValpoAthletics.com.

Head Coach Carin Avery: In her 16th season as head coach at Valparaiso, Carin Avery has won 362 matches (362-159, .695) at the helm of the Crusaders and has led Valpo to three league regular season and tournament titles, as well as three NCAA Tournament appearances. A two-time league Coach of the Year, Avery has coached 49 All-League recipients over her tenure as Crusader head coach. She is Valpo’s all-time leader in both victories and winning percentage, and owns 417 career victories overall as a head coach.

Series Notes: Bradley - The Crusaders and Braves have split 14 all-time meetings, 7-7, but Valpo has enjoyed the better of it recently, with wins in each of the last three matchups dating back to 2007. The last meeting between the two squads came in September of 2010 at the Bradley Invitational, a 3-1 victory for the Crusaders which secured the tournament championship and was their 10th straight victory.

Illinois State - Valpo's series against the Redbirds is also an even one, as both teams have won two of the four meetings all-time. The Crusaders earned the win in each of the last two matchups, including most recently a 3-1 victory at Illinois State in October of 2013.

Scouting the Opposition: Bradley - The Braves enter this weekend at 7-12 on the year, but have dropped their first five MVC matches this season. Junior outside hitter Erica Haslag leads the MVC, averaging 4.36 kills/set, while libero Yavianliz Rosado ranks third in the conference with 5.37 digs/set.

Illinois State - The Redbirds currently sit at 9-9 overall and 2-3 in MVC play, with a matchup against Loyola Friday night before the Crusaders visit Normal on Saturday night. Junior libero Courtney Pence leads The Valley and ranks second nationally with 6.38 digs/set, while senior middle Jaelyn Keene is tied for second in the conference with an average of 0.34 aces/set.

Digging Deep: For the fifth consecutive week, Valpo leads the nation in digs per set as the Crusaders remain the only squad in D-I volleyball posting more than 20 digs a frame. The Crusaders are averaging 20.31 digs/set over their first 16 matches, far out-pacing Notre Dame, which ranks second nationally with 19.05 digs/set. Valpo has a long tradition of strong defensive play, as the program has ranked among the top-20 nationally in digs/set in each of the last seven seasons - including a sixth-place placement in 2015 and a fourth-place finish in 2010. Freshman Rylee Cookerly continues to pace Valpo with 5.91 digs/set, good for ninth nationally. Saturday night's matchup with Illinois State could be a lengthy one, as it pits two of the nation's top-three teams in digs against each other.

Picking Up the First Win: Valpo earned its first MVC victory in volleyball on Sunday afternoon, going to Loyola and coming away with a 3-1 win. The Crusaders rolled to wins in each of the first two sets, and after dropping set three, bounced back in a big way as they hit .500 with 17 kills in the fourth set to earn the win. The .500 hitting percentage was Valpo's best in a single set this season.

Graboski Reaches Milestone: Senior Taylor Graboski became just the 16th player in program history to reach 1,000 career kills last week at SIU, ending the third set with her 12th kill of the match to hit the milestone. Following a 13-kill effort last time out in the win at Loyola, Graboski now owns 1,022 career kills, just 75 away from cracking Valpo's all-time top-10. With 311 career blocks, she is only 14 rejections away from making that top-10 list as well. Graboski has stood out so far in MVC play, averaging 3.73 kills/set on .374 hitting as well as 1.27 blocks/set.

Ketcham Moves Up As Well: Redshirt junior Allison Ketcham is poised to join the Crusaders' top-10 all-time in digs in the coming weeks, as she continues to move up the chart. With 32 digs over last week's pair of matches, Ketcham now has 1,194 career digs and moved up into 14th position in program history - just 114 digs shy of Valpo's top-10. On the season, Ketcham is averaging 4.45 digs/set, which leads all non-liberos in The Valley.

Freshmen Stepping In: A pair of Crusader freshmen came off the bench with strong efforts last week. Middle hitter Peyton McCarthy matched her season best with seven kills on Monday at SIU, needing just 11 swings to do so. Then in Sunday's win, outside hitter Jaclyn Bulmahn contributed to the Crusaders' dominant offense in the fourth set to close out the victory at Loyola, tying her season high with five kills on just six swings in that fourth frame.

Youth Movement: With nearly half the Crusader roster comprised of freshmen (six of 13 players), it stands to reason that a number of the freshmen would be called upon to play big roles this year. Brittany Anderson and Rylee Cookerly have started every match this season at setter and libero, respectively, while Ally Cummings has started 14 of 16 matches on the right side. Peyton McCarthy has also made a trio of starts, and in fact, against Drake on Sept. 23, all four freshmen were in the starting lineup together.