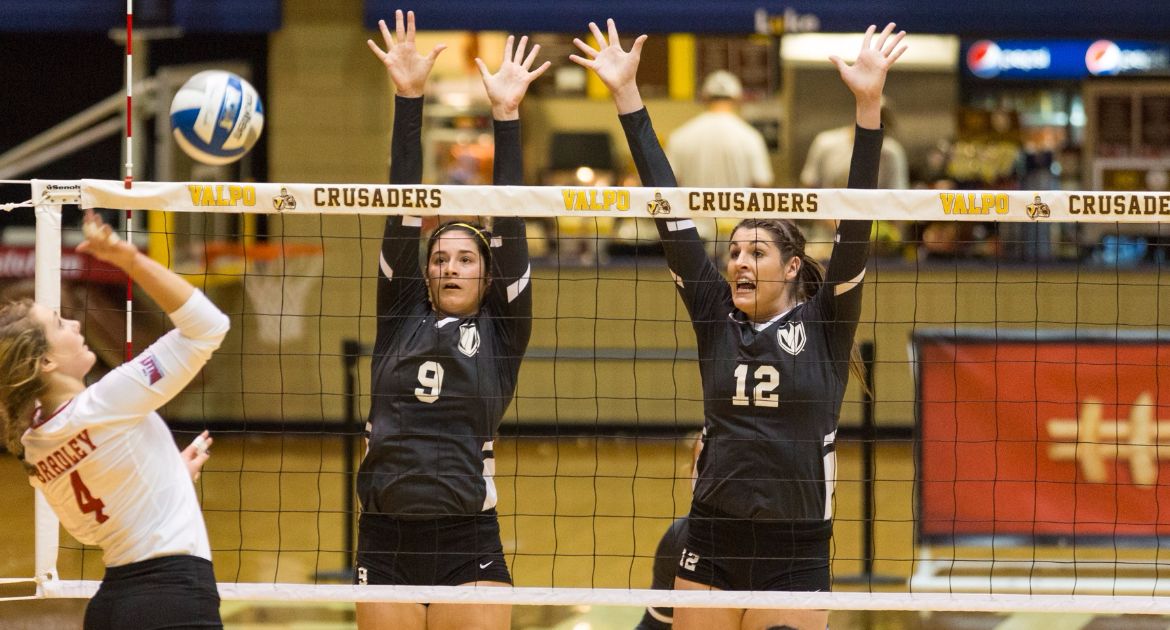 Key road trip on tap as regular season winds down

This Week in Crusader Volleyball: With just four matches remaining in the regular season, the Valparaiso University volleyball team heads on the road for the final time for a pair of key MVC contests, as the Crusaders take on Evansville Friday night and Indiana State Saturday evening. Both matches are against teams battling with Valpo for spots in the MVC Tournament.

Previously: The Crusaders went 2-1 over a four-day stretch last week, defeating Chicago State in their final non-conference match of the season before splitting a pair of MVC matches over the weekend, as they were swept by Illinois State before sweeping Bradley.

Looking Ahead: The regular season comes to a close at the ARC next weekend, as Valpo hosts conference leader Missouri State on Friday, Nov. 17 before taking on Southern Illinois on Saturday, Nov. 18.

Following the Crusaders: Links for live stats for both of this weekend's matches will be available through ValpoAthletics.com.

Head Coach Carin Avery: In her 16th season as head coach at Valparaiso, Carin Avery has won 369 matches (369-164, .692) at the helm of the Crusaders and has led Valpo to three league regular season and tournament titles, as well as three NCAA Tournament appearances. A two-time league Coach of the Year, Avery has coached 49 All-League recipients over her tenure as Crusader head coach. She is Valpo’s all-time leader in both victories and winning percentage, and owns 424 career victories overall as a head coach.

Series Notes: Evansville - The Crusaders are just 6-10 all-time versus the Purple Aces, but have won all four meetings under Carin Avery. In their first meeting within MVC play, Valpo swept UE 25-18, 25-12, 25-18, led by 12 kills on .526 hitting from Taylor Graboski.

Indiana State - The Sycamores hold a 13-10 advantage in the all-time series over the Crusaders. Valpo had won five straight in the series, but the last two decisions have gone to ISU, including a three-set sweep at the ARC earlier this season.

Scouting the Opposition: Evansville - The Purple Aces enter Friday night's match at 10-16 overall and 4-10 in Valley play, as they were swept on the road at UNI and at Drake last weekend. Rachel Tam leads the Evansville offense with 2.83 kills/set, while in the back row, libero Cassie Brooks picks up 4.61 digs/set.

Indiana State - The Sycamores currently sit at 7-19 overall and 5-9 within the MVC, with a Friday night match against Loyola before taking on the Crusaders Saturday. Laura Gross is averaging a team-high 3.25 kills/set and also adds 3.67 digs/set, while Damadj Johnson ranks among the conference's top blockers with 90 rejections on the year.

A Glance at the Standings: Valpo gained some separation from the teams below it in the standings last weekend, as the Crusaders currently sit alone in fifth place in the MVC with a 6-8 conference record. Indiana State sits just below the Crusaders in sixth place at 5-9, while Evansville and Southern Illinois are both 4-10. The top six teams at the end of the regular season advance to the MVC Tournament.

Digging Deep: For the eighth consecutive week, Valpo leads the nation in digs per set as the Crusaders remain the only squad in D-I volleyball posting more than 20 digs a frame. Through last Saturday's win over Bradley, the Crusaders are averaging 20.26 digs/set, well ahead of UNI in second position (19.28 digs/set). Valpo leads the way as five MVC programs rank in the top-six nationally in the category. Valpo has a long tradition of strong defensive play, as the program has ranked among the top-20 nationally in digs/set in each of the last seven seasons - including a sixth-place placement in 2015 and a fourth-place finish in 2010.

Challenging a Long-Standing Record: Valpo's program record for digs in a single season has stood for over a quarter-century, as the 1991 North Star Conference regular season champions tallied a total of 2,479 digs that year. But this year's squad could make a run at that mark, as the Crusaders topped 2,000 digs for the season last time out. If Valpo maintains its pace of 71.64 digs/match, the Crusaders could break the record if they play 35 matches.

Cookerly Cracks Top 10: Freshman libero Rylee Cookerly averaged 5.62 digs/set over Valpo's four matches last week, including a 23-dig performance at Missouri State and 26 digs in just three sets against Illinois State, as she cracked the Crusaders' single-season top-10 for digs. Cookerly has tallied 571 digs on the season, 10th-most in a single season in program history, and is just 15 digs away from reaching the Crusader freshman record in the category. Her season average of 5.77 digs/set is good for ninth nationally, as she bids to become the first Valpo player to finish in the top-10 in the nation in a statistical category since 2010 (Taylor Root, digs/set, 1st; Ariel Cudney, aces/set, 9th).

Strong Offensive Performances: Entering the Crusaders' match at Drake on Oct. 20, Valpo had not hit better than .276 in a single match this season. But over the last seven matches, the Crusaders have hit .290 or better four times, including a .290 clip last time out in the sweep of Bradley and a .291 mark last week in mid-week non-conference action at Chicago State. Freshman Brittany Anderson has continued to set all the way around, setting the Valpo offense to a .205 hitting percentage within MVC play to improve upon its .170 clip outside of conference action. Anderson cracked four figures in assists on the season last weekend as well.

Winning in Three: The Crusaders have made it a habit to keep the matches short when they come out on the winning end, as each of their last seven victories have come in straight sets. Five of Valpo's six wins in MVC action as well have come in just three sets. In all, 15 of Valpo's 28 matches this season have finished in three sets, including seven of its last nine outings.

Racking Up the Kills: Freshman Peyton McCarthy entered last week with 34 total kills on the year, but nearly doubled that mark over the Crusaders' last three matches of the week. She opened her action for the week with a career-best nine kills on just 15 swings to hit .600 in Wednesday's sweep at Chicago State, adding a career-high six blocks as well. On Friday, McCarthy came off the bench against Illinois State to hit .250 with eight kills, and then matched her career best the next night in the sweep of Bradley with nine kills on .438 hitting. For the week, McCarthy averaged 2.89 kills/set on .400 hitting.