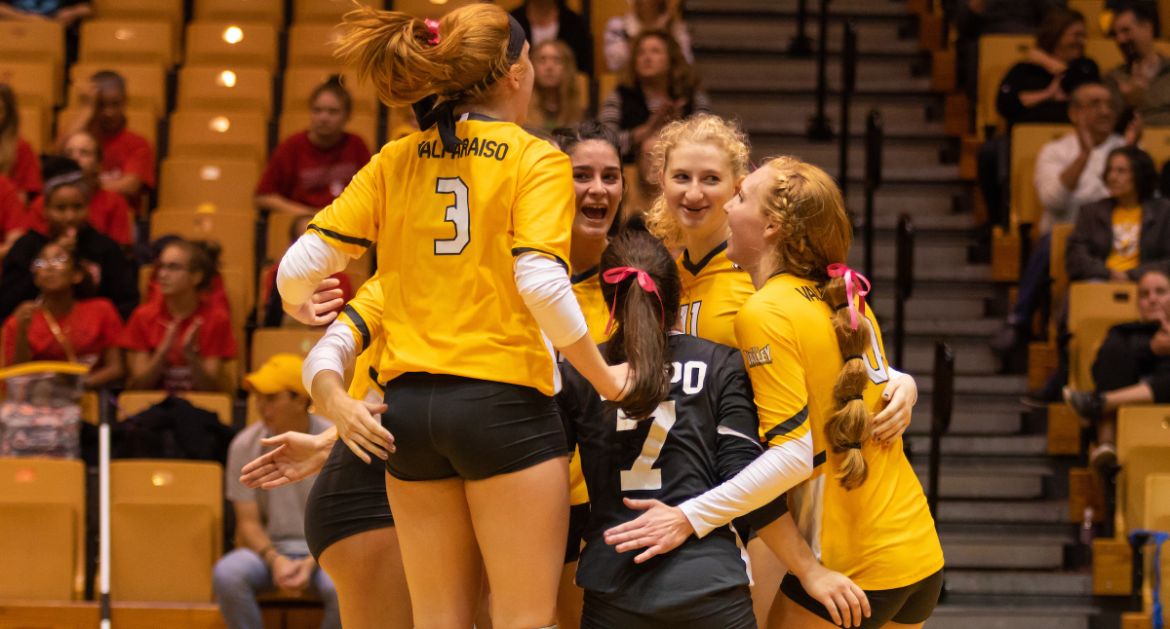 This Week in Valpo Volleyball: Coming off a stretch of three matches over four days, the Valparaiso University volleyball team faces a light slate this weekend, but the lone match is an important one, as Valpo heads up to Chicago to face a Loyola squad Friday night which it currently sits one game ahead of in the MVC standings.

Previously: Again playing most of the weekend with a one-middle lineup, Valpo pushed a UNI squad on the brink of the top-25 to five sets before falling 3-2. Valpo then came back with a road sweep at Drake Saturday night before returning home Monday evening, where it fell to Missouri State by a 3-1 final.

Looking Ahead: Valpo’s final weekend of home action awaits next weekend, as the Brown and Gold host Bradley on Friday, Nov. 9 and Illinois State on Saturday, Nov. 10.

Following the Action: This weekend’s match against Loyola can be seen live on ESPN3. Live stats will be available as well.

Head Coach Carin Avery: In her 17th season as head coach at Valparaiso, Carin Avery has won 392 matches (392-174, .693) at the helm of the Crusaders and has led Valpo to three league regular season and tournament titles, as well as three NCAA Tournament appearances. A two-time league Coach of the Year, Avery has coached 55 All-League recipients over her tenure at Valpo. She is Valpo’s all-time leader in both victories and winning percentage, and owns 447 career victories overall as a head coach.

Series History: The third-most common opponent in program history, Valpo is 18-27 all-time versus Loyola. But recent history has trended Valpo’s direction, as since 2005, the Brown and Gold enjoy a 15-3 edge in the series. That mark includes wins in both matches (3-1 at Loyola; 3-0 at Valpo) last season in Valpo’s first year as an MVC member, and a memorable come-from-behind earlier this year at the ARC, a contest which Valpo trailed 2-0 before rallying for a 3-2 win.

The Different Lineup: With the exception of the final two sets at UNI Friday night, Valpo continued to play with a one-middle, two-right side lineup in all three matches last weekend. Freshman middle Haley Hart got the starts against UNI and Drake, and in the sweep of the Bulldogs in the latter match, set a new career high with five blocks to lead all players. Sophomore middle Peyton McCarthy returned to action for two sets at UNI after missing the previous weekend, and then played all four sets against Missouri State.

Cookerly Earns Recognition: For the first time in her career, sophomore libero Rylee Cookerly earned MVC Defensive Player of the Week honors on Monday after averaging a conference-best 5.50 digs/set in Valpo’s matches at UNI and Drake. After being named the honoree on Monday afternoon, Cookerly went out and tallied a match-high 27 digs against Missouri State, passing the 500-dig milestone for the season and the 1,200-dig mark for her career. Cookerly was Valpo’s second consecutive MVC award winner, as Ally Cummings was named Player of the Week the previous weekend after averaging 4.29 kills/set on .520 hitting in a pair of wins.

Just Win, Baby, Win: Valpo now has 21 victories on the season, the 15th time in Avery’s 17 seasons that Valpo has won 20 or more matches. This year marks the seventh time out of Avery’s 15 20-win teams that the program reached the 20-win mark within the season’s first 25 matches. Valpo also already owns eight MVC wins to match its conference total from last year with five conference matches left on the docket.

The Conference Race: While thw top two spots in the MVC standings are likely out of reach for Valpo, the Brown and Gold are in the midst of a five-team battle for 3rd through 7th place - with the 7th-place team missing out on the conference tournament. Valpo enters this weekend at 8-5 in MVC play, in 4th place and one game behind Bradley for 3rd place, and is currently 2.5 games up on Drake in 7th place, while also owning the tiebreaker with the Bulldogs by virtue of the season sweep. Friday’s match against Loyola is vital - with a win, Valpo would be two games up on the Ramblers and own the tiebreaker, while with a loss, the two teams would be even in the standings and would have split the season series.

RPI Ranks: Valpo still sits in strong position in the latest NCAA RPI release, coming in at 62nd nationally. Valpo is one of three MVC squads in the top-65, joined by UNI (15th) and Illinois State (41st). Valpo has posted a top-100 RPI finish just three times in the tenure of head coach Carin Avery, and not since 2008 (67th). Valpo’s best-ever RPI finish came in 2004, when it clocked in at 55th position.

Among the Nation’s Best: Entering this weekend, no team in Division I has tallied more total digs than Valpo’s 1,882 digs this year. Valpo also ranks eighth nationally in digs/set, looking for its ninth straight season of placing among the top-20 in the nation in the latter category. As a team, Valpo also sits 26th in opponents’ hitting percentage. Individually, Rylee Cookerly ranks 37th in digs/set and Brittany Anderson ranks 47th in assists/set.

Moving Up the Charts: Senior Katherine Carlson moved in Valpo’s career top-10 in kills last weekend at UNI and currently ranks 10th with 1,122 kills, while Allison Ketcham is right behind her in 11th with 1,114 kills. Once both surpass the current ninth-place total of 1,134 kills (Sarah Dooms), they will be the first set of classmates to rank among Valpo’s career top-10 in the category. Carlson also moved into fifth in program history on Monday in career service aces, and owns the second-most aces by a Valpo player in the last 25 years.