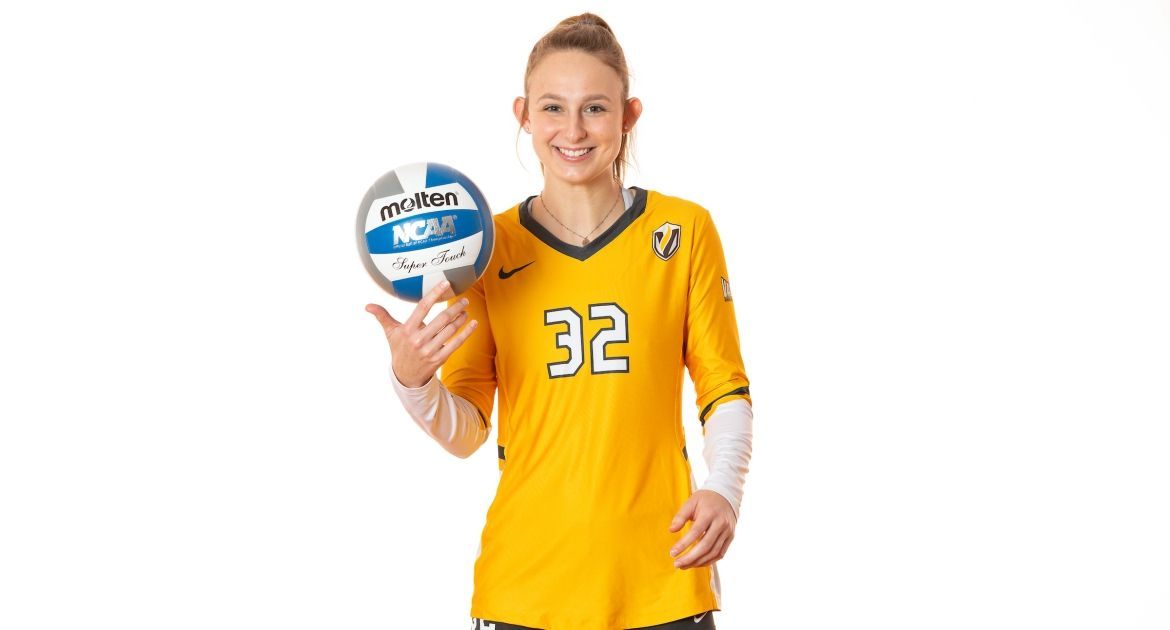 This Week in Valpo Volleyball: With just three weekends left in the regular season, every match becomes vital in the battle for placement in the standings and for tournament seeding. This weekend sees the Valpo volleyball team welcome UNI to the ARC for a pair of matches against teams who enter the weekend separated by just one game in the MVC standings.

Previously: Playing its first matches at home in three weeks, Valpo split its two-match MVC series with Bradley last weekend. The Brown and Gold took down the Braves in straight sets on Sunday and won the opening set on Monday before Bradley rallied for a 3-1 victory.

Looking Ahead: Valpo closes out the home slate next weekend as it hosts Indiana State at the ARC next Sunday and Monday, March 21 and 22.

Following the Action: Both matches this weekend are scheduled to be broadcasted live on ESPN+. WVUR is scheduled to have radio broadcasts of both matches as well. Links for the live video and audio, as well as live stats, will be available via ValpoAthletics.com.

Head Coach Carin Avery: In her 19th season as head coach at Valparaiso, Carin Avery has won 419 matches (419-205, .671) at the helm of the Brown and Gold and has led Valpo to three league regular season and tournament titles, as well as three NCAA Tournament appearances. A two-time league Coach of the Year, Avery has coached 61 All-League recipients over her tenure at Valpo. She is Valpo’s all-time leader in both victories and winning percentage, and owns a 474-229 (.674) record overall as a head coach.

Series History: Valpo is looking for its first win in the all-time series with the Panthers, as UNI owns the 14-0 advantage. Eight of those matchups have come since Valpo joined the MVC prior to the 2017 season, with the Brown and Gold twice pushing the Panthers to five sets. UNI has eliminated Valpo in the semifinals of the MVC Tournament each of the last two seasons.

Scouting the Opposition: UNI enters the weekend 6-8 overall and with a 6-4 mark in MVC action. The Panthers opened the season dropping five matches in a row before winning five of their next six, but have now lost two of their last three contests. Emily Holterhaus averages a team-high 3.09 kills/set - the only player on the squad posting more than 2.16 kills/set. In the back row, Baylee Petersen owns a team-best 3.37 digs/set.

Digging Deep: Valpo continued its long tradition of strong back row play in 2019, finishing the year ranked ninth nationally in total digs and 26th in digs/set. The Brown and Gold have ranked among the top-30 nationally in digs/set in each of the last 10 seasons, including leading the nation with 20.03 digs/set in 2017 to go along with a fourth-place rank in 2010 and a sixth-place finish in 2015. 2018 saw Valpo lead the nation in a digs category as well, as it posted 2,613 total digs - a mark which not only ranked first nationally for total digs, but also set a program single-season record and a Division I record in the 25-point era. Valpo currently sits third nationally with 20.85 digs/set, trailing only Bradley and Arkansas-Pine Bluff.

Finishing in Three: It had been over a month since Valpo had a match end in the minimum three sets before the Brown and Gold swept Bradley in the opener of the two-match series last Sunday. Valpo’s only other three-set match so far this season was a non-conference win over Butler on January 29. Having had only one three-set match so far through 12 MVC matches this year is a complete 180 from the norm, as in its first three years in the conference, 28 of Valpo’s 54 MVC contests were decided in three sets (18-10).

Splitsville: Following its split with Bradley this past weekend, Valpo has now split four of its six MVC series so far this season. The team’s only non-splits were two losses at Missouri State and two wins at Drake. Of the four splits, the Bradley series was the first time Valpo won the first match before losing the second.

Staying Home: After a five-match stretch away from home, Valpo is in the midst of a string of six consecutive home matches over three weekends. The last time Valpo played six straight matches at the ARC came back in October 2008 - five of which were within Horizon League play. Valpo won the final five of those six matches to kick off a 13-match winning streak.

McCarthy On Her Game: Senior Peyton McCarthy hit a team-best .388 while averaging 3.14 kills/set and also led Valpo with 1.29 blocks/set as the Brown and Gold split with Bradley. In the Sunday sweep of the Braves, McCarthy hit .421 while tallying 10 kills and tying for team-high honors with four blocks. Monday, she followed with 12 kills on .367 hitting and again led the defense at the net with five blocks. McCarthy is now hitting .259 on the year, good for 10th in the Valley.

Cookerly Keeps Digging: In her return to the lineup last weekend against Bradley, senior Rylee Cookerly averaged 5.71 digs/set, including a match-high 19 in the three-set sweep of the Braves Sunday. The mark might not sound high by her lofty standards, but that average would rank 13th nationally this year. On the season, Cookerly is averaging 6.06 digs/set and ranks fourth nationally in the category. She now owns 2,401 career digs, just 22 away from fourth place in MVC history. She also is just 29 digs away from cracking the NCAA’s top-25 career chart in the category and could potentially jump all the way up to 19th with this weekend’s matches.

Bulmahn Sets Things Up: A two-time MVC Freshman of the Week selection this year, rookie Victoria Bulmahn continued her strong play at the setter position last weekend. Bulmahn set the offense to a season-best .292 hitting percentage in the sweep of Bradley Sunday, recording 43 assists over the three sets. Bulmahn followed on Monday with 46 assists and 14 digs and finished the week averaging 12.71 assists and 3.14 digs per set. On the year, Bulmahn leads the MVC with 11.02 assists/set, a mark which ranks 22nd nationally and is good for fourth among D-I freshmen.

Ravotto Steps Up: Asked to fill in at libero for the two-match series at Drake, sophomore Bella Ravotto did so with aplomb and received MVC Defensive Player of the Week accolades for her efforts. Sunday saw Ravotto notch 18 digs in a four-set win before she exploded for a match-high 38 digs in Monday’s five-set win over Drake. The 38 digs shattered her previous career high of 23 and are tied for fourth-most by a Valpo player in a single match in the 25-point era. 21 of her 38 digs came in the final two sets as Valpo rallied from a 2-1 deficit to close the series sweep, including 15 in the fourth set - tying the most by a Valpo player in a single set since Rylee Cookerly notched 19 digs in the third set at Notre Dame in August 2017. Ravotto also tallied nine assists in the Monday victory, easily a career best in that category as well. For the series, Ravotto averaged 6.22 digs/set and did not commit a serve reception error.

Swinging Away: After posting 12 kills and a career-best 25 digs in the Sunday win at Drake, junior Jillie Grant exploded for a tremendous offensive performance in the come-from-behind win on Monday. Grant shattered her career best by tallying 26 kills on 71 swings. The 26 kills are tied for the most by a Valpo player in a five-set match in the 25-point era, tied for second-most in any length match in the 25-point era and tied for fifth-most in any length match in the rally scoring era, while the 71 attempts are tied for third-most in any length match in the 25-point era. 11 of Grant’s kills came in the fourth set alone, tied for second-most in a single set in Coach Avery’s tenure, and three of them came on Drake match points to keep the match alive. Grant also tallied 21 digs in the Monday victory as she posted her first career 20-20 effort. For the series, Grant averaged 4.22 kills/set on .273 hitting and 5.11 digs/set.