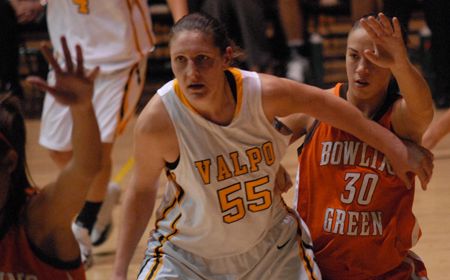 Playing without two starters, Sylwia Zabielewicz (Warsaw, Poland/Generala Wladyslawa Andersa H.S.) gave Valparaiso a much needed lift on Saturday afternoon, and poured in a career-high 20 points while grabbing nine rebounds as the Crusaders defeated Detroit 70-65 in overtime at Calihan Hall in Detroit, Mich.

Zabielewicz, whose previous career high was six points for the Brown and Gold, had that total surpassed prior to halftime, and made 7-of-9 shots from the floor and went a perfect 6-of-6 from the free throw line on the afternoon.  She also added two steals.

“Sylwia gave us a strong inside scoring presence today,” head coach Keith Freeman said.  “She did a nice job of finishing.”

With the win, the Crusaders returned to the .500 mark overall, and, more importantly, in Horizon League play as well, earning their first road conference win of the year.  The win was also 15th-year head coach Keith Freeman’s 250th sitting on the Valpo bench.

“This was a good team win,” Freeman added.  “I’m proud of all our kids and how we made plays.”

Valpo started the game hitting from long range, as four different Crusaders drained triples in the game’s first eight minutes.  Behind the four threes, Valpo took an early 17-12 lead.  The advantage was extended to seven, 24-17, with 8:13 to play before halftime as Launa Hochstetler (Berlin, Ohio/Hiland H.S.) hit her second triple of the game.  The Crusaders were also capitalizing on Detroit turnovers, as the first six Titan miscues resulted in 13 points for the Brown and Gold.

Detroit went on an 8-0 run to take its first lead of the game 25-24 following a steal and lay-in by Jalesa Jones at the 5:42 mark.  The Titans extended the lead to five, 31-26, making five of their first nine three-point attempts after entering the game entering the game as just a 30.9% shooting team from long range.

Valpo closed the half strong though, scoring the final nine points before intermission.  Leah Hochstetler’s triple put the Crusaders back on top with just 1:24 to play.  Zabielewicz made two free throws just before intermission to cap off her perfect 6-of-6 shooting from the charity stripe in the first 20 minutes on her way to a career-high 10 first half points overall.

Detroit tied the game at 37 shortly into the second half, making three triples, the final three the Titans would make on the day.  Valpo rebuilt its advantage though, utilizing a 7-0 run to take a 48-40 lead with 14:28 to play.

The Crusaders went scoreless for the next 5:25 until Zabielewicz scored on a putback with nine minutes remaining.  By that time the Titans had scored 13 straight points and taken a five-point advantage, 53-48.  Valpo struggled from long range in the second half, making just one of its first 11 shots from beyond the arc in the first 13 minutes of the second half.

Rashida Ray (Fort Wayne, Ind./Harding H.S.) found Zabielewicz alone down low with 2:39 to play to cut the deficit to one, 57-56.  One possession later, Whitney Farris (Kokomo, Ind./Kokomo H.S.) drained a 10-footer in the lane to put the Brown and Gold on top by one.

After a Valpo defensive stop, Leah Hochstetler hit a triple with just over a minute to play to push the lead to four, 61-57, but Sandi Brown answered, scoring from eight-feet with 45.5 seconds to play.

A Crusader turnover on a back-door play gave the ball back to the Titans, and Brown connected inside with 10.8 seconds to play to tie the game at 61.  Aimee Litka’s (South Bend, Ind./Saint Joseph’s H.S.) 28-foot three as time expired missed the mark and the team’s went into overtime.

In overtime, Litka scored first for the Crusaders with a drive inside, but Detroit answered.  Jones had a steal and score to tie the game and Chanica Hall followed with a drive that put the Titans on top, 65-63.  Valpo’s defense held the rest of the way and the offense took over.

Leah Hochstetler hit a three from the left with 1:27 to play to put the Crusaders on top for good.  After Jones missed inside with 50 seconds to play, Litka made both ends of a one-and-one to increase the lead to three.  Jones’ triple try with six seconds left was way off and Leah Hochstetler made two more free throws to secure the victory.

“We had people step up with our injuries and did a good job being a team today,” concluded Freeman.

Launa Hochstetler added 10 points and five assists for the Crusaders, while tying a career-high with six steals on the afternoon.  Valpo outrebounded Detroit 39-28, grabbing 14 offensive boards.

Brown led Detroit (5-10, 1-3 Horizon) with 16 points and seven rebounds while Hall added 14 points for the Titans off of the bench.

Valparaiso (7-7, 2-2) returns home on Thursday evening to battle the Flames of UIC at the Athletics-Recreation Center.  Tip-off is set for 7:05 p.m. with all the action carried live on the Horizon League Network.

Game Notes: Farris and Katie Emig (Farmington Hills, Mich./Birmingham Marian H.S.) made their first starts of the season … Launa Hochstetler’s five assists leave her just five shy of 300 for her career … this was Valpo’s fifth straight overtime victory … the Crusaders last played an overtime contest on January 17, 2008, a 90-88 victory over Green Bay at home … Valpo leads the all-time series with Detroit 4-3, including a 3-1 edge in the Motor City … the Crusaders have won the last three meetings between the two schools.