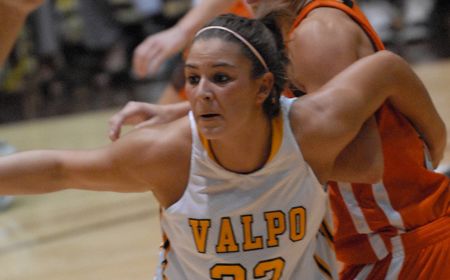 Coming Up in Crusader Hoops: After back-to-back losses in Horizon League play, Valparaiso will look to rebound on Saturday afternoon as the Crusaders head to the Motor City to battle Detroit.  Valpo is also looking to return to the .500 mark both overall and in conference play.

On the Air: Saturday’s game against Detroit will be carried live on the Horizon League Network at horizonleaguenetwork.tv or through the link at valpoathletics.com.  In addition, the game can be heard live on WVUR (95.1-FM, Valparaiso) and online at www.valpoathletics.com.   Danny Robertson and Deon Robinson will carry all the action live from Calihan Hall.

Series Notes: Valparaiso and Detroit have split the six all-time meetings between the two schools, with each team posting a 2-1 record on their opponent’s home floor.  The Crusaders won both meetings last season, the first between the two teams since 2000.  Valpo was a 71-50 victor at Detroit on January 26, while posting a 65-55 win against the Titans at the Athletics-Recreation Center on February 21.

Wrapping Up Wright State: Valpo shot just 24.5% from the floor on Thursday evening, and went a span of more than 20 minutes making just one field goal as the Raiders defeated the Crusaders 54-44 in Dayton, Ohio.  The Crusaders forced 31 Wright State turnovers, but could not take advantage of them, and the Raiders also shot 50% for the game, including nearly 65% in the second half.  Aimee Litka paced the Valpo offensive attack with 13 points while Betsy Adams added 10 more for the Brown and Gold.  Shey Peddy led all scorers for Wright State with 19 points  while LaShawna Thomas added 17 points and grabbed nine rebounds.

Scouting Detroit: The Titans are just one win away from matching their entire win total from 2007-2008 under first year head coach Autumn Rademacher.  Detroit has dropped two straight though, after falling 71-48 at home against Butler on Thursday evening.  Brigid Mulroy leads the Titans in scoring on the season, averaging 11.4 points per game.  Sandi Brown adds 11.1 points per game and is grabbing a team-leading 5.5 rebounds per night overall.  In Horizon League play, Brown’s numbers are even better, averaging 12.0 points and 6.7 boards per game.  Talicia Washington adds 9.3 points and 7.0 rebounds in conference play.

Freeman Looks For #250 at Valpo: Head coach Keith Freeman’s hopes the third time is the charm, as Valpo’s next victory will be his 250th on the bench of the Crusaders.  Valpo’s head man for 15 seasons, Freeman is 249-175 all-time at Valpo.  He has recorded more than half of the program’s victories all-time, and has led the Brown and Gold to winning seasons in 12 of his first 14 years with the Crusaders.  In addition, Freeman coached in his 600th career game in 21 seasons overall on Thursday night at Wright State.  He has a career 378-222 record coaching women’s basketball.

Adams Scores in League Play: Freshman Betsy Adams may have found her role coming off of the bench for the Brown and Gold.  She is the team’s leading scorer in Horizon League play, pouring in 12.0 points per night.  She tallied 10 points on three triples against Wright State on Thursday night.  She began conference play scoring 12 points against Youngstown State and following that up with a season-best 14 versus Cleveland State on Monday evening.

Shooting Woes: Valpo’s starting backcourt has struggled shooting the ball in Horizon League play.  Launa Hochstetler and Agnieszka Kulaga are a combined 4-for-38 (10.5%) over the past three games since the start of conference action.  Hochstetler has made 3-of-23 shots from the floor while Kulaga is 1-for-15.

Emig Gets on the Glass: Katie Emig has grabbed at least six rebounds for the Brown and Gold in two of the last three games.  Against Wright State she grabbed six boards, while pulling down seven last weekend against Youngstown State.

Giving It Up: Launa Hochstetler leads the Horizon League averaging 5.0 assists per game this season.  The senior point guard is averaging 6.5 assists per contest over the last four games, including registering a career-high nine helpers against North Florida.  She has recorded seven or more assists in four games and has at least four in all but four contests this year.

Hochstetler Solid at the Line: Launa Hochstetler leads the conference shooting 88.1% (52-of-59) from the free throw line this season.  For her career, the senior is an 85.0% shooter from the charity stripe.  She needs 19 more attempts to qualify for Valpo’s career leaderboard.

Rough Shooting Nights: Valpo has struggled shooting the basketball as a team over the last four games, connecting on less than 30% of its shot attempts in three of the four games.  Valpo’s 24.5% shooting against Wright State marked a season-low for the Crusaders,

Getting Bench Production: Valpo’s bench has stepped up over the last three games for the Crusaders scoring at least 50% of the team’s points. The non-starters scored 49 points in the 86-43 win against Youngstown State last Saturday.  Two days later, the subs registered 31 of Valpo’s 55 points against Cleveland State, and Thursday night against Wright State tallied 22 of the team’s 44 points.

Creating Turnovers of Late: Over the last two games, Valpo has forced 10 more turnovers from its opponents than the Brown and Gold have committed.  The Crusaders forced Wright State into 31 miscues one game after creating 27 turnovers against Cleveland State.

For Three: As a team, Valpo leads the conference making 6.1 triples per game.  The Brown and Gold had made at least five in every game this season until Thursday night when the Crusaders made just four treys against Wright State.  Individually, Aimee Litka is second in the Horizon League making 2.5 threes per night, and has made at least one triple in every game this year.

Kulaga Nearing Top-20 All-Time at Valpo in Scoring: Agnieszka Kulaga has the opportunity to move into the top-20 all-time at Valpo in scoring within the next couple of games.  The senior guard has scored  798 career points (8.8 per game), and needs just 35 more to match Jill Otto’s (1985-1989) 20th place mark of 830 points.

Freeman Earns Milestone Win: Head coach Keith Freeman’s victory against Florida State was the 375th of his career coaching women’s basketball.  In his 21st season overall, his next milestone on tap is 250 victories at Valpo. He needs just one more win to reach the Valpo mark, where he has been coaching the last 15 years.

Hochstetler Among Top-10 Career Assist Leaders: Launa Hochstetler continues to climb Valpo’s career assist list.  She had three assists against Wright State to move past Lauren Bechtold (2002-2006) into sole possession of sixth place all-time with 290 helpers for the Crusaders.  With 10 more assists, she will become just the sixth player in Valpo history to reach the 300 assist mark for a career.

Kulaga Nearing Top-15 in Assists: Agnieszka Kulaga had one assist against Wright State and now has 218 career assists to rank 16th all-time wearing the Brown and Gold.  Next up on the assist charts for Kulaga is Stephanie Greer (1987-1991), who is 15th with 224 career helpers, six more than the senior.

Litka Among Top-10 All-Time in Triples: Aimee Litka made one more three-pointer against Wright State to solidify her spot in eighth place in school history with 138 career threes.  The senior is two triples shy of Heidi Diefenthaler’s (1992-1996) seventh place total of 140 treys while wearing the Brown and Gold.