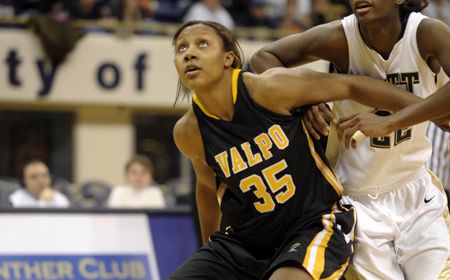 Betsy Adams (Monticello, Ind./Twin Lakes H.S.) scored 18 points, including 15 in the second half, but it was not enough for Valparaiso on Tuesday evening as the Crusaders fell 77-52 at #15/15 Pittsburgh to begin a five-game road trip, including three straight against Big East foes.

Adams hit six triples for the game to finish over her season average (17.0) and tally double figures for the seventh straight game.

“Pitt is an extremely talented team,” head coach Keith Freeman said.  “I felt our second half was much better than the first.  We found a way to score which is something we didn’t do the first half.”

The Crusaders hung close with Pitt early, with Adams giving the Brown and Gold its lone lead at 6-5 with a triple.

The Panthers crashed the boards though, collecting six offensive rebounds in the first four-and-a-half minutes and turning them into points to retake the lead.  Valpo hung around as Pitt started just 5-of-17 from the floor, and was within one, 12-11, with just over 13 minutes to play.

Pitt closed the half on a 24-4 run though, taking a 36-15 lead into halftime.  Valpo was held without a field goal for nearly nine minutes, and with out points for eight, during the run.

The Crusaders shot just 20% (5-of-25) in the first half while committing 14 turnovers.  Pitt was 35% from the floor and finished the stanza with 12 offense boards.

Adams found her stroke from long range in the second half, scoring 12 consecutive Crusaders points all on triples, her last making it 60-38 with 8:57 to play in the game.

The Crusaders finished the game shooting just 27.5% from the floor and committed 22 turnovers while Pittsburgh (8-0) connected on 43.3% from the field and had just 14 miscues.  The Panthers converted Valpo’s turnovers into 27 points.

“This was a tough game on the road for us,” Freeman added.  “It needs to be a learning experience on how to improve our play.  Our goal is for us to get better.”

Lauren Kenney (Mooresville, Ind./Mooresville H.S.) tallied 12 points as the only other Crusader to finish in double figures, making 8-of-9 from the free throw line.

Taneisha Harrison led Pitt with 27 points while Shayla Scott added 13.  Chelsea Cole had 15 boards for the Panthers, including eight on the offensive end as Pittsburgh outboarded Valpo 46-37.

“This was the most physical game since I’ve been at Valpo,” Freeman concluded.  “Our kids had to learn to adjust to that level.”

Valpo (3-4) will face another Big East foe on Saturday afternoon as the Crusaders head to #3/4 Notre Dame.  Tip-off is set for 1 p.m. CST.

Game Notes: This was the first meeting between Valpo and Pitt … the Panthers will visit the ARC next season … Kenney and Adams both have scored in double figures in all seven games this year … Ashley Varner (South Bend, Ind./Washington H.S.) had a career-high three blocks … Adams pulled down a career-best five rebounds … Valpo matched a season-high with five blocked shots.