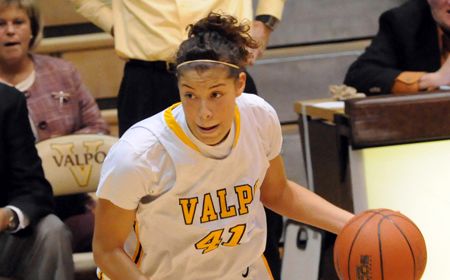 Ashley Varner (South Bend, Ind./Washington H.S.) scored a career-high 23 points, including five three-pointers, but Cincinnati finished the game on a 25-9 run as the Bearcats defeated the Crusaders 62-50 on Monday evening in Cincinnati, Ohio.

Varner, the only Crusader in double figures, also pulled down a team-high seven rebounds.

Varner was hot in the first half, scoring 16 points, including four triples.  Her second of the game gave Valpo an early 13-9 lead as the Crusader defense forced five turnovers during the first eight minutes.

The lead changed hands 10 times during the first half though, with the Crusaders building their largest lead at five, 26-21, after Varner’s fourth triple of the first half with 3:54 to play before intermission.

An 8-0 Cincinnati run put the Bearcats on top by three, but Raegan Moore’s (Girard, Pa./Girard H.S.) triple as time expired sent the Crusaders into the locker room tied at 31.

Valpo shot 46% from the floor in the first half and committed just four turnovers to offset 61% shooting by Cincinnati.  The Bearcats committed 10 miscues though and outrebounded Valpo 17-7 during the first 20 minutes.

The Crusaders went 5:51 without scoring in the second half until Betsy Adams (Monticello, Ind./Twin Lakes H.S.) made a pair of free throws with 12:11 left.  The Valpo defense kept the game close though, as the two charity tosses made it 38-37 Crusaders.

The draught from the field continued for both teams though, as neither team connected from the floor for nine minutes until Varner’s trip made it 41-37 Valpo with 9:09 to play.

“That was the best defense we’ve played all year, head coach Keith Freeman said.  “When it was 41-37 with nine minutes to go I thought it would be to our advantage as a grind it out game.  We then gave up six points on missed boxouts where they got second shots.”

Kahla Roudebush hit back-to-back triples for the Bearcats to give the hosts a lead they would not relinquish the rest of the way.  The threes started a 10-0 run which made it 48-41 with 5:36 to play.

Cincinnati scored 14 straight points from the free throw line over the final six minutes to secure the victory.

We played a pretty good floor game wit only four turnovers in the first half and 11 for the game,” Freeman added.  “Offensively we needed to get going to the rim more than we did.  We missed four to five layups in the second half.”

“For 30 minutes our defense was better than it has been all year,” Freeman said.  “It was very solid for 30 minutes.  Their inside game was pretty well shut down so I credit our post players.  We just had moments in the game where they out executed us and our defense.  It’s the same thing worked on in practice all week so its not a shock.  We have to be able to get to shooters with urgency.”

Valparaiso (3-6) will take a week off for Christmas before returning to the hardwood on Monday, December 28 to take on Auburn in the first round of the San Diego Surf ‘n Slam hosted by San DiegoState.  Tip-off is slated for 9 p.m. CST.

Game Notes: Whitney Farris (Kokomo, Ind./Kokomo H.S.) made her first start of the season and is the ninth Crusader to start a game this season … Varner had surpassed her previous career high of 14 points 16 minutes into the game … Valpo was just 2-of-6 from the free throw line while Cincinnati was 24-of-27 … this was the 450th game at Valpo for Coach Freeman … Cincinnati leads the all-time series 2-0.