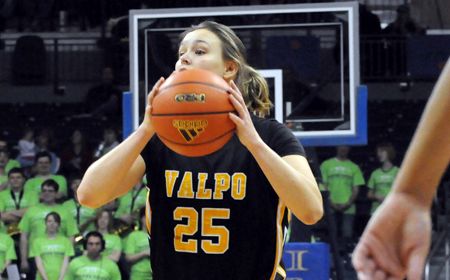 Whitney Farris scored 12 of her 15 points in the first half, including this lay-in. (Ray Acevedo)
Valparaiso at Loyola (Chicago) | March 04, 2010
Related Links
Related Links

Valparaiso fought back from an 11-point second half deficit and had a lead late, but Katie Kortekamp’s three-pointer with 8.9 seconds remaining gave Loyola (Chicago) a 62-61 victory over the Crusaders on Thursday night at the Gentile Center in Chicago, Ill.

Loyola answered with a 13-9 run, making 5-of-6 from the floor during the span to take a 15-8 lead at the 10:32 mark following Keisha Collins’ basket.  The Ramblers were taking advantage of Valpo turnovers, as the Crusaders made nine miscues in the first nine minutes of the game.

The Ramblers built the lead to 11, 37-26, shortly out of the locker room before Valpo went on a big run.  A Varner triple pulled the Crusader within six, 37-31, and when Watts scored inside Valpo was within two, 39-35.  A Varner putback brought Valpo within two before Lauren Kenney (Mooresville, Ind./Mooresville H.S.) took over.

Loyola tied the game at 45, and then back-to-back triples by Ellen Ayoub and Maggie McCloskey put the Ramblers back on top by six, 53-47, with 7:29 to play.

Kenney, who scored 16 of her game-high 18 points  in the second half, gave Valpo a five-point advantage after scoring inside twice in a row, the second coming with 1:36 to play.

“Lauren did a good job making herself a target in transition,” head coach Keith Freeman said.

An Ayoub three-pointer on a third shot attempt with 46.2 seconds left cut the Valpo to 61-59.  Valpo then came down, and Laura Richards (Connersville, Ind./Connersville H.S.) had an open triple, but missed as the shot clock wound down with 19 seconds to play.

“We ran that play the last three times down the floor and scored,” Freeman said.  “Laura took the right shot, and it was a good shot.”

Loyola came down and Kortekamp drained the game-winning shot from the left side with 8.9 seconds to play.  Valpo had one last shot, but Farris’ 10-footer in the lane rimmed out.

“We still had a chance at the end if we could have executed,” Freeman added.  “I’m comfortable with what we did when we went to the rim.”

Farris and Varner each scored 15 points for the Crusaders in addition to Kenney’s 18, with Varner also pulling down nine rebounds.  Valpo shot 60.9% from the floor in the second half.

Collins led Loyola (15-13, 9-8 Horizon) with 14 points while Ayoub added 13 points and nine rebounds off of the bench.  Kortekamp finished with 12 pints and Brittany Boeke had 10 more as four Ramblers scored in double figures.

Valparaiso (8-20, 5-12) will close out the regular season on Saturday afternoon when the Crusaders return to Chicago to face UIC.  Tip-off is set for 3 p.m. at the UIC Pavilion.

Game Notes: Farris scored in double figures for the fifth straight game … Farris made a career-high four triples … Kenney finished 7-of-8 from the floor while Watts was 4-of-5 … Valpo leads the all-time series 15-2 … Loyola’s win snapped a four-game Valpo win treak in the series.