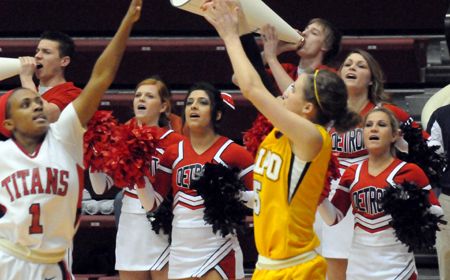 Valparaiso led Detroit for the first 28 minutes on Monday evening in the first round of the Horizon League Championship at Calihan Hall, but the Titans went on a 28-8 run midway through the second half and hung on to defeat the Crusaders 57-50 to end the Brown and Gold’s 2010-2011 season.

Betsy Adams (Monticello, Ind./Twin Lakes H.S.) led the Crusaders with 13 points while Rashida Ray (Fort Wayne, Ind./Harding H.S.) added 10 for the Brown and Gold, but Valpo shot just 29% from the floor as a team in the second half and went scoreless for six minutes.

“This was a microcosm of the season where there were big parts of the game where we competed hard and knew what was going on, but there were four to five minutes where lose it,” head coach Keith Freeman said.

Leading 30-24 at halftime, the Crusaders extended the advantage right out of the locker room.  Kelly Watts (Gary, Ind./East Chicago Central H.S.) scored down low and Ray followed with a triple to give Valpo its largest lead of the game, 35-24 with just under 18 minutes to play.

The Titans battled back, scoring eight straight points to pull within three following a Lauren Allen steal and score.

Cherridy Thornton then made three of her four second half three-pointers as part of another 12-0 Detroit spurt, as Valpo went from the 13:30 mark to the 7:04 mark without scoring.  The Titans took their first lead of the game at the 11:59 mark on a Thornton three, and by the time Valpo found the basket again, Detroit led 49-43.

An Allen triple with 5:14 to play gave the Titans their largest lead of the game, 52-43, before Valpo tried to battle back one last time.

“In the second half we didn’t guard as well as the first half,” Freeman added.   “We didn’t execute offensively as well and part of it was due to their pressure.”

A Ray jumper in the paint pulled the Crusaders within five, 54-49, with two minutes to play and Tabitha Gerardot (Fort Wayne, Ind./Canterbury H.S.) added a free throw with 1:15 left to cut the deficit to four.

Valpo got a stop defensively, but a missed two missed shots with just over 30 seconds to play ended the Brown and Gold’s comeback bid.

The Crusaders jumped on top from the opening tip, and the defense held Detroit to just 2-of-13 shooting over the first eight minutes as Valpo built an early 11-7 advantage.

The Brown and Gold’s lead fluctuated between three and six most of the half before Maegan Callaway (Mooresville, Ind./Mooresville H.S.) scored inside at the 3:16 mark.  Detroit was whistled for a technical foul at the same time and Adams made both free throws, extending the lead to 25-17 before the Crusaders took the six-point lead into intermission.

Thornton led all scores with 25 points for Detroit (13-17), making 6-of-11 from long range.  Dominique Dixon added 15 points and a game-high eight rebounds.

Gerardot added nine points while Callaway tallied eight points off of the bench for the Crusaders.

“We have a clear idea of what we need to do heading into the offseason to make this team better,” Freeman concluded.  “We’ll take a few weeks off and then have the girls come back ready to work.  We’re excited about what we’ve signed for next year and are looking to add to the roster in addition to the three we have.”

Valparaiso’s season finishes at 7-23 while the Titans advance to the quarterfinals on Wednesday to face Butler in Indianapolis, Ind.

Game Notes: Callaway had three blocks in the game, a career high and the most by a Crusader this season in a single game … Valpo finished the season with 214 three-pointers as a team, third most all-time by the program … the Crusaders’ 645 triple tries were second most all-time … Adams finished the season seventh all-time for career threes with 146 … Adams 68 threes this season tied for fifth on Valpo’s single season charts … Ray, Watts, and Stephanie Thomas (Avon, Ind./Avon H.S.) all closed their Crusader careers Monday.