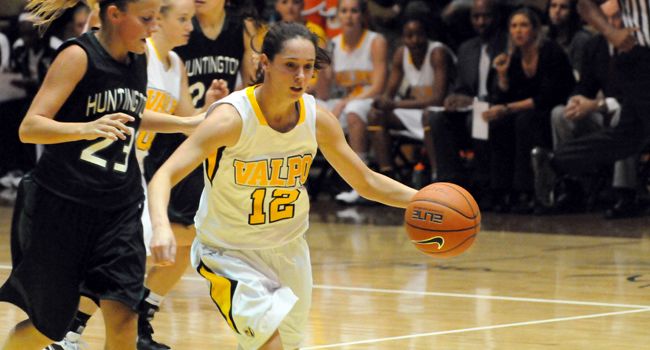 Valparaiso wrapped up the exhibition portion of its schedule on Saturday afternoon as the Crusaders defeated Saint Joseph’s (Ind.) 65-62 at the Athletics-Recreation Center.

“Mallory's a great competitor,” head coach Keith Freeman said.  “I've never had a kid in the gym more than her.  She's a great communication on the floor for a freshman, has great hands and a knack for pursuing rebounds.”

Valpo jumped out to a 19-8 lead at the 10:50 mark of the first half before Saint Joseph’s went on an 8-3 run to close within six.  The Crusaders rallied late in the half though, and following a Varner lay-in, led 40-28 at the break.

After a Ladd triple with just under 12 minutes to play gave Valpo a 13-point lead, the Pumas cut into the lead.  A three-pointer by Kate Novak made it a six-point game at the 6:22 mark.

“They were a hard team for us to guard,” Freeman added.  “We wanted to guard them man-to-man and work on our containment defense, but it's hard to do that when you're playing an undersized team and trying to play two posts.”

Three straight threes by Saint Joseph’s pulled the Pumas to within two, 62-60, at the 1:22 mark, but Valpo made three free throws down the stretch to secure the win.

Valpo shot 40% from the floor on the afternoon while Saint Joseph’s made just 28.8% of its baskets.  Eleven threes by the Pumas though kept them in the game.

“We need to get better at learning when to help,” Freeman concluded.  “We're overhelping right now, and it leads to a lot of open shots, which helped keep them in the game today.”

Valpo committed 21 turnovers in the contest.

Valparaiso will open the regular season next Saturday afternoon in Edwardsville, Ill. against the Cougars of SIU Edwardsville.  Tip-off is set for 1 p.m.