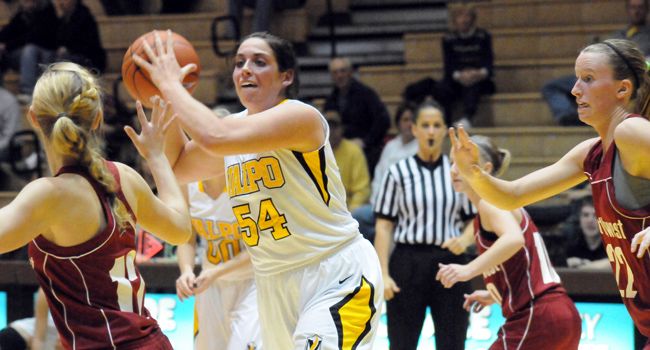 Paced by double-doubles from Tabitha Gerardot (Fort Wayne, Ind./Canterbury H.S.) and Mallory Ladd (Evansville, Ind./Memorial H.S.), seven players scored seven or more points for Valparaiso on Wednesday evening as the Crusaders picked up their first victory of the season, defeating Indiana-Northwest 80-47 at the Athletics-Recreation Center.

“Tab is really playing within herself instead of trying to create things,” head coach Keith Freeman said after the game.  “She has become a much better player in the last two to three weeks.”

“Shaq got us off to a good start tonight scoring the first five points and getting a steal,” Freeman added.  “She’s a product of learning on the fly because of our circumstances.  She has a lot of talent and potential.”

Valpo jumped on top 8-0 over the game’s first three-and-a-half minutes and never looked back as the Crusaders forced the Redhawks to miss their first nine shots from the floor.  The lead grew to 26-8 midway through the opening stanza and by halftime the Brown and Gold had a 41-17 advantage.

“We did a nice job moving the ball to begin the second half,” said Freeman.  “We got some good inside looks.”

“We got a chance to get some people some minutes and to see what they can do,” Freeman added.  “WE’re just trying to get better as a team.”

As a team Valpo shot 44.8% from the floor and outrebounded the Redhawks 53-34.  The Crusaders outscored Indiana-Northwest 38-14 in the paint.

Sharon Houston led Indiana-Northwest (1-7) with 18 points and nine boards as the Redhawks connected on just 27.9% from the field.

Valparaiso (1-5) will continue its three-game homestand on Saturday afternoon hosting the Mountain Hawks of Lehigh.  Tip-off is slated for 12:05 p.m. at the ARC.

Game Notes: This was the first meeting ever between the two Northwest Indiana schools … Varner has had seven or more boards in every game this season … Carr’s six assists were a career-best as were the four steals … Gerardot’s 19 points marked a season high … Horton entered the game with seven career points before scoring nine on the evening … her 19 minutes played were a collegiate best … Scott had a career-best seven rebounds.