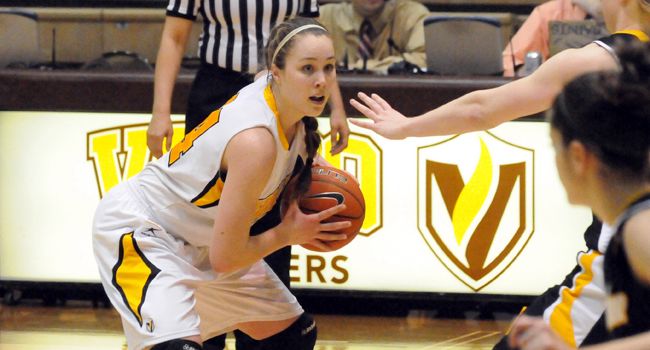 The movie Hoosiers, filmed at historic Hinkle Fieldhouse, had not even been produced the last time Valparaiso defeated Butler on the famed court prior to Saturday afternoon, but the Crusaders finally ended the road losing streak to the Bulldogs that dated back to 1983 with a convincing 71-58 triumph in Indianapolis, Ind.

Valpo shot a season-high 52.1% from the floor for the game and made 7-of-11 (63.6%) from long range erasing a one-point halftime deficit to win back-to-back games on the road for the first time since March of 2008.

“I’m just so proud of how our kids battled,” head coach Keith Freeman said after the game.  “They continue to try and get better and have battled through a great deal of adversity.”

Tabitha Gerardot (Fort Wayne, Ind./Canterbury H.S.) scored a career-high 26 points, making 10-of-17 shots from the floor, and pulled down eight rebounds to pace the Crusaders.

“Tab did a nice job of scoring in a variety of ways today,” Freeman added.  “She was really focused and has been shooting the ball better of late.  She did a good job of taking high quality shots.”

The Crusaders trailed 30-29 at intermission but Ashley Timmerman (Pontiac, Ill./Pontiac H.S.) connected on a three-pointer on Valpo’s first possession of the second half to give Valpo the lead for good.  Two trips down the floor later, Timmerman drained another three and followed that up with a jumper in the paint.  The senior then registered a steal and scored to cap a personal 10-0 run and give the Crusaders a 39-30 lead less than three minutes out of the break.

“In the second half Ashley Timmerman became a scoring machine,” said Freeman.  “Those first two or three minutes she gave us a good cushion.”

Gerardot added a basket in transition a short while later and pushed the Crusader advantage to 12, 46-34, at the 14:19 mark as Valpo started 7-of-9 from the floor in the second half.

Butler answered with a 7-0 run to cut the lead to four and the margin remained when Gerardot hit a step-back triple with just under eight minutes to play.  Ieva Jansone (Riga, Latvia/Agenskala Gymnasium H.S.) added a three of her own to extend the lead to eight and Jessica Carr (Arcadia, Ill./Hamilton H.S.) followed with a jumper to give the Crusaders a double digit lead again with just over six minutes left.

Laura Richards (Connersville, Ind./Connersville H.S.) added a baseline jumper at the 2:13 mark to cap an 11-3 run and extend the lead to 13.  The junior point guard then went 6-for-6 from the free throw line over the final 1:15 to secure the win.

“Laura made the free throws we needed from her down the stretch,” Freeman concluded.

Richards finished with 12 points, making 8-of-9 from the charity stripe, while playing all 40 minutes for the seventh time this season and third consecutive game.  Timmerman added 13 points on 5-of-7 shooting from the field, including 3-of-4 from long range.

Butler jumped out to its largest lead of the game, 11-6, early in the first half before Timmerman tied the game at 14 with a triple.  Valpo took the lead 21-19 at the 5:15 mark when Gerardot scored inside, but then had to battle foul trouble the rest of the half.  The Crusaders were able to go into the locker room trailing by just one, giving themselves the opportunity for the second half win.

Valpo’s defense held the Bulldogs to just 27.3% shooting from the floor in the second half after Butler connected at 40.7% in the opening 20 minutes.  The Crusaders were a blistering 64% from the field over the final stanza.

Game Notes: Butler leads the all-time series 20-7 but the Crusaders swept the season series against the Bulldogs … Valpo had won just once previously in 12 tries at Hinkle Fieldhouse against the Bulldogs … Gerardot’s career high of 26 points matched Varner for the most points by a Crusader this season as Varner tallied 26 last Saturday at Cleveland State in the win … the 63.6% shooting from beyond the arc is the eighth best shooting game in school history.