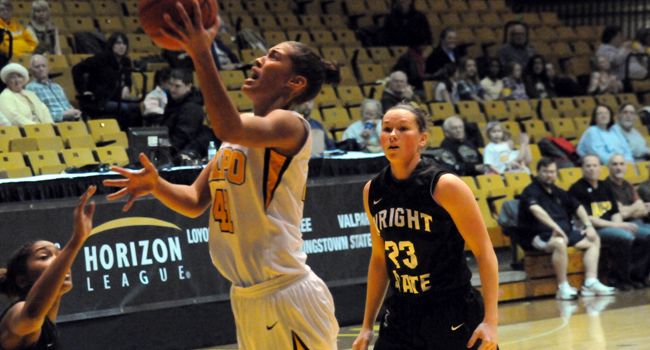 Tabitha Gerardot (Fort Wayne, Ind./Canterbury H.S.) and Ashley Varner (South Bend, Ind./Washington H.S.) combined for 46 points and 22 rebounds on Thursday evening as Valparaiso posted a 70-60 victory over Wright State at the Athletics-Recreation Center to remain in the hunt for a home opening round game in the Horizon League Tournament.

“I’m proud of our kids and the energy they had tonight,” head coach Keith Freeman said.  “This league is one in which you have to be ready every night.  Anyone can beat anyone on any given night.”

Gerardot finished with a game-high 25 points and pulled down eight boards in 39 minutes of action while Varner added 21 points and grabbed 14 rebounds, one off of her career high.

“Varner really showed energy,” Freeman stated.  “She hit shots taking it to the rim while Gerardot posted well inside.”

After Wright State scored the game’s opening basket, the Crusaders scored the game’s next 15 points, capped with a Gina Lange (Wyoming, Minn./Forest Lake H.S.) triple at the 11:43 mark.  The Raiders opened the game 1-of-18 from the floor.

The Raiders answered, closing within two, 17-15, before Valpo pushed the lead back to seven.  Wright State tied the game at 22 on a three-point play by Kim Demmings, before Varner hit a bucket and Gerardot scored four straight points, including a basket at the horn as the Crusaders took a 28-22 lead into the locker room.

Out of the locker room, Wright State closed to within one as Demmings scored six of the Raiders’ first 10 points to make it a 33-32 game.  The Raiders took their only lead of the second half, 39-38, on a three-pointer by Courtney Boyd at the 13:06 mark.

Valpo immediately answered, retaking the lead.  With the game tied at 44, Ashley Timmerman (Pontiac, Ill./Pontiac H.S.) took an inbounds pass and scored underneath and was fouled, giving the Crusaders the lead for good.

“That inbounds play where she curled was a big play for her,” Freeman said afterwards.  “Laura (Richards) made a nice pass.”

Timmerman’s basket started a 15-2 Valpo spurt, which was capped by a triple from Laura Richards (Connersville, Ind./Connersville H.S.) as the shot clock wound down, giving the Crusaders a 59-46 lead at the 5:43 mark.

“That’s why I say she (Laura) is in the zone,” Freeman added.  “She’s zeroed in right now.

The Raiders cut the lead to six down the stretch but Valpo made seven-of-eight free throws to secure the victory.

Valpo finished the game shooting 40% from the floor.  In addition to Varner grabbing 14 rebounds, Timmerman pulled down a career-high 10 caroms.

“Timmy rebounded well out of the zone,” Freeman said.  “She’s critical for our team because she’s such a smart player.  She’s one of our most skilled as well.”

“I was worried about Demmings because she can single-handedly beat you,” Freeman commented.  “Fox is very good as well. They got their points but we didn’t let the other kids beat us.”

Valparaiso (9-19, 5-12) will close out the regular season on Saturday afternoon hosting Detroit on Senior Day.  With a win the Crusaders would still be in the running for one of the two first round home games on Monday night.  Tip-off is slated for 12:05 p.m.  This is a change from the previously scheduled start time.

“We need to be ready to play again Saturday,” Freeman concluded.

Game Notes: Valpo leads the all-time series against Wright State 12-8 and is 9-2 against the Raiders at the ARC … Varner’s 14 boards give her 254 on the season, moving her into fourth on the school’s single season charts … Richards finished the game with five steals and has 73 for the year, eighth most in school history … Valpo scored 70 points in the game after combining for 67 total in the previous two.