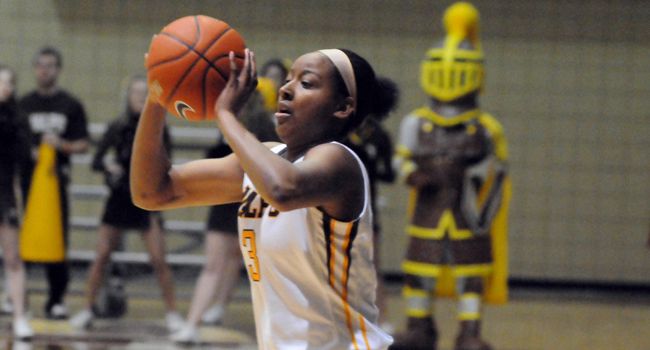 Sophomore Shaquira Scott (Wilmette, Ill./Loyola Academy) filled up the stat sheet with nine points, seven rebounds, two blocks and two steals, but Valparaiso fell on the road to #25/RV Green Bay by a score of 80-38 on Saturday afternoon.

The Crusaders, who trailed 39-13 at halftime, opened the second half on an 8-2 spurt. Scott opened with a layup and then junior Charae Richardson (Lafayette, Ind./Jefferson [Vincennes]) and Scott drilled back-to-back 3-pointers to make it 41-21 with 17:27 to play.

The Phoenix kept the Crusaders from getting on track early in the game. Valpo shot 3-of-29 in the first half and did not register a field goal until sophomore Jessica Carr (Arcadia, Ind./Hamilton Heights) had a layup at the 12:51 mark of the half.

Green Bay opened the game on an 18-2 run. Five straight points from Carr and senior Gina Lange (Wyoming, Minn./Forest Lake) trimmed the deficit to 11, but the Phoenix pushed the margin to 21 with a 12-2 run.

“Green Bay really got after it and anticipated what we were going to do and what the next play was going to be,” Dorow said. “They really took us out of things. We rushed some shots and forced some. You can’t shoot 10 percent in any game and expect to win, but especially not against a team like Green Bay.”

The Phoenix shot 30-of-62 from the field while limiting the Crusaders to 11-of-52 shooting. Green Bay totaled 20 assists while forcing 18 Crusader turnovers.

Valparaiso (9-16, 4-8) begins a stretch of three games in five days on Thursday, Feb. 28, when the Crusaders host Wright State at the Athletics-Recreation Center at 7:05 p.m. The game can be heard live on WVUR-FM, 95.1, and links for live audio, video from the Horizon League Network and live stats will be available on www.valpoathletics.com.