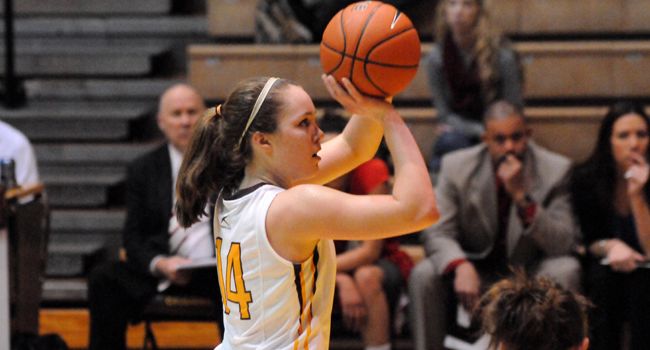 Junior forward Tabitha Gerardot (Fort Wayne, Ind./Canterbury) recorded her 12th double-double of the season, and the Valparaiso women’s basketball team made top-seeded #20/20 Green Bay work hard to earn its 80-59 win in the Horizon League Quarterfinals at the Kress Events Center on Wednesday evening.

Gerardot scored 21 points and grabbed 11 rebounds for her 25th career double-double. She tied a Horizon League Tournament single game record by going 10-for-10 at the free-throw line. Her 21 points brought her into a tie with Marlous Nieuwveen for seventh on the all-time VU scoring list with 1,217 points.

“I’m so proud of our team,” said Valparaiso coach Tracey Dorow. “We played our butts off for the seniors. We played hard the whole time. We did what we were supposed to, and it just wasn’t enough. Give it to Green Bay. They’re outstanding. They played a heck of a game.”

Green Bay stormed out to a 9-0 lead on 3-pointers from Adrian Ritchie, Lydia Bauer and Sarah Eichler. Gerardot and sophomore Jessica Carr (Arcadia, Ind./Hamilton Heights) combined on a 9-3 run to get the Crusaders within three at 12-9 at the 13:44 mark. Gerardot had three baskets, and Carr buried a 3-pointer from the wing.

Junior Charae Richardson (Lafayette, Ind./Jefferson [Vincennes]) opened the second half with a 3-pointer to trim the deficit to 12. From that point, the teams traded scores for the next 10-plus minutes. A 3-pointer from Gerardot cut the Green Bay lead to 50-37, and after a basket from Lydia Bauer, senior Gina Lange (Wyoming, Minn./Forest Lake) scored inside to make it 52-39 with 9:52 to go.

That was as close as Valparaiso would get for the rest of the game. The Phoenix led by as many as 24. Freshman Abby Dean (Carmel, Ind./Carmel) ended the scoring with a pair of layups in the closing seconds.

“We did a great job of being aggressive. We didn’t back down. They’re a physical and tough team, and we didn’t back down from that. We matched their physicality. We just didn’t knock down the shots that they did. We battled with a lot of heart.”

Ritchie led Green Bay (27-2), which has now won 22-consecutive games, with a game-high 27 points. Bauer added 17, while Eichler had nine points and 11 assists. The Phoenix had 24 assists on their 28 baskets.

Valparaiso ends the season with a record of 11-20.