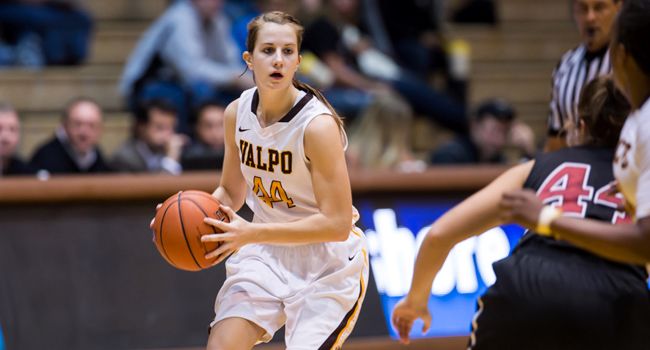 The Valparaiso women's basketball team had a couple question marks entering the 2013-14 season. Sharon Karungi (Kampala, Uganda/Northern Oklahoma College) provided an exclamation point for one of them in the Crusaders' 89-62 exhibition win over Saint Joseph's (Ind.) at the ARC Tuesday night.

The junior shot 9-of-16 from the floor en route to a 23-point, 14-rebound opening act. In addition to leading all scorers, Karungi was a dominating presence on defense, accumulating four blocks and two steals.

"Offensively, she seemed to find openings and took advantage of them, and she cleaned up defensively," head coach Tracey Dorow said after the game.

Overall, the Brown and Gold shot 48.5% from the floor and were 11-for-27 from three-point range. Valpo sustained an upbeat tempo on offense and forced 18 Puma turnovers in the opening tilt.

Valpo and Saint Joseph's went back-and-forth for the better part of the first half. The Crusaders created a comfortable margin at the end of the first period, though, thanks to a 14-4 run. Charae Richardson (Lafayette, Ind./Jefferson [Vincennes]) was responsible for seven of those 14 points, converting on all three attempts from the charity stripe. By the time the final horn of the first half sounded, Richardson had 18 points.

With a 43-32 halftime lead, Valpo found itself beneficiaries of ten offensive boards which directly led to a 12-0 gap in second chance points.

Saint Joseph's opened the second half with a 12-4 run of its own, drawing it to a 47-44 game. The tide shifted back Valpo's way after the first media timeout.

Sophomore Jessi Wiedemann (Palatine, Ill./Fremd) drained three of her four second-half treys in a six-and-a-half minute span to extend Valpo's lead back into double digits. Wiedemann finished the night shooting 5-for-10 behind the arc as she contributed 20 points in the winning effort.

Stellar three-point shooting wasn't limited to Wiedemann. Abby Dean (Carmel, Ind./Carmel) knocked down three of her four three-point attempts. She also went a perfect 2-for-2 from the line as the sophomore registered 13 points and seven boards.

Once the Crusaders established their double-digit lead, there was no looking back. The Pumas made just four field goals in the final nine minutes of the game while Valpo continued its furious offensive attack, leading by 30 at one point.

"I was very, very proud of the way we bounced back. You could sense there were some nerves in the first few minutes, and I think that was evident in how we shot the ball early on. All in all, I was very pleased with how we settled in," Dorow said.

In addition to shooting 54.5% from the field in the second half, the Crusaders went 14-for-17 from the free throw line as a team.

Valpo will travel to St. Louis to take on the Billikens in the regular season opener Sunday afternoon. Tip-off is slated for 2:00 pm at the Chaifetz Arena.