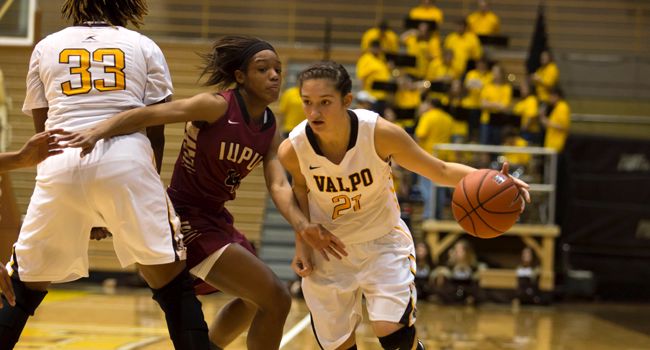 An astonishing shooting display from the perimeter guided the Oakland Golden Grizzlies to an 88-55 win over Valpo Wednesday night at the O'Rena in Rochester, Michigan.

Oakland launched three-pointer after three-pointer in the first half as it continued to build on its advantage over the Brown and Gold. Sophomore Elena Popkey knocked down all five of her attempts from beyond the arc en route to a 17-point stanza.  Meanwhile, Amy Carlton also was perfect from outside, draining each of her four tries. The three-point field goal totals were season highs for both players.

Overall, the Golden Grizzlies made 12 treys in a fast-paced first twenty minutes as they led 50-23 at the break. Elizabeth Hamlet (McBain, Mich./McBain [Oakland]) was 3-for-3 from the field as her six points paced the Crusaders.

The Golden Grizzlies eased off the long ball in the second half, attempting nine threes compared to 21 in the prior half. Popkey continued her stellar shooting though as she finished with a career-high 25 points on 10-of-14 field goal shooting.

Both Hamlet and sophomore Abby Dean (Carmel, Ind./Carmel) enjoyed 4-of-5 evenings from the floor. Hamlet converted on all four of her free-throw attempts, while Dean was a perfect 2-for-2. As a team, the Crusaders shot 14-for-15 from the line. Their aggregate free-throw percentage now rests at 80.2%, good for fourth in the nation.

Hamlet led the Crusaders in scoring for the first time this season as she recorded 12 points, her highest output as a Crusader.

As good as the three-ball was for Oakland, it was just as unforgiving for Valpo. The Crusaders ended the night 1-of-11 from beyond the arc, while the Golden Grizzlies finished 14-of-30.

Valpo (2-13, 0-2 Horizon) will have a quick turnaround as they'll entertain the Wright State Raiders (13-5, 2-1 Horizon) Saturday as part of a doubleheader. The women's game is scheduled to tipoff at 4:00pm CT.