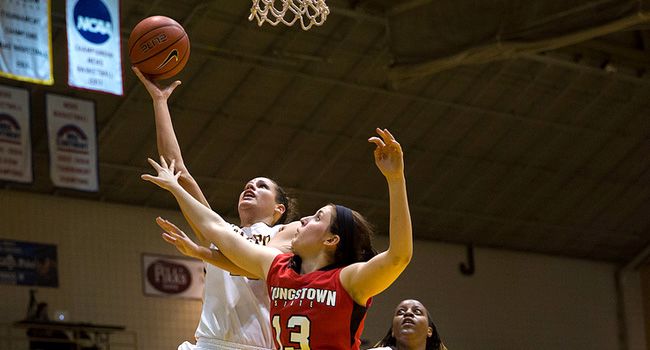 Thirty minutes of superb shooting went for naught Tuesday night after the Crusaders went the final nine-plus minutes without a field goal in a 69-51 defeat by the UIC Flames. The Flames ended the game on a 19-1 run while none of Valpo's final fourteen shots from the floor fell.

Valpo did a commendable job of breaking down UIC pressure in the first half. Credible fakes and quick ball movement resulted in a number of uncontested baskets. Valpo shot 15-of-25 (60%) in the first twenty minutes as it held a 36-34 advantage at the break. Liz Horton (Cannelburg, Ind./Barr-Reeve) fired off a perfect 4-for-4 in the first half as her nine points led the Crusaders. Charae Richardson (Lafayette, Ind./Jefferson [Vincennes]), Abby Dean (Carmel, Ind./Carmel), and Aliyah Isaac (Richton Park, Ill./Marian Catholic) each had six points at the break.

Of equal significance was the fact the Crusaders lured UIC forward Katie Hannemann into her third foul at the 6:55 mark. The redshirt senior, who entered Tuesday's tilt averaging 12.7 points and 8.3 rebounds, was whistled for her second foul just 19 seconds prior. The Crusader bench promptly called a play in her direction and drew a blocking foul. Hannemann was relegated to the bench for the remainder of the half.

The break did Hannemann wonders as she went off for 14 points in the second half. She finished up with a game-high 18 points after knocking down all six of her free throws.

Four minutes into the second half, Ruvanna Campbell made back-to-back field goals to give the Flames their first lead since the infant stages of the ballgame.

With the scored tied at 44 apiece, Hannemann made UIC's next six points to put the Flames ahead 50-46. Jessi Wiedemann (Palatine, Ill./Fremd) sliced the deficit in half via a 12-footer with just a little more than nine minutes to play. The two-pointer represented Valpo's last field goal of the night.

Single free throws from Dean and Horton tied the tilt for the final time at 50-50 with 7:58 left. UIC rattled off 19 consecutive points while shot attempt after shot attempt rang out for Valpo. A Richardson free-throw with five seconds to play snapped the extended scoring drought.

Horton paced the Crusaders with 14 points. Dean was 5-of-7 from the field as she chipped in 11.

The Brown and Gold managed just 15 points in an offensively bipolar second half where they shot 5-of-30 from the floor. Overall, Valpo was 2-for-17 from three-point range.

The Crusaders will turn right back around and prepare for Detroit (3-14, 0-4 HL). The Titans come in Thursday night for a 7:05 pm CT tip. Links to the audio, video, and live stats will be available at valpoathletics.com.