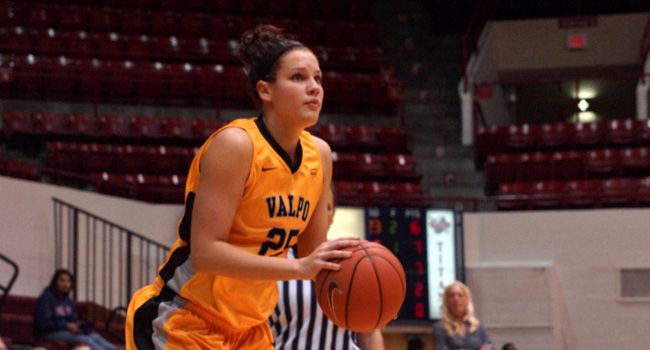 The Crusaders won their first game in the Horizon League Tournament for the third straight year Monday night, scoring a 76-69 win over Detroit at Calihan Hall.

Liz Horton (Cannelburg, Ind./Barr-Reeve) registered a career-high 25 points on 9-of-16 shooting. The senior was a perfect 6-for-6 from the foul line in addition to securing five rebounds. Jessica Carr (Arcadia, Ind./Hamilton Heights) nailed three treys en route to a 14-point, five-assist night.

The first twelve minutes were a tight, back-and-forth affair. The Crusaders led 20-16 before Senee Shearer hit a three from the left wing. The Brown and Gold answered the Titans' leading scorer's triple with a 14-2 run as Jessi Wiedemann (Palatine, Ill./Fremd) recorded all seven of her first half points during the eight-minute spurt. Detroit's Megan Galloway snapped the streak with a three-point play, but by that time Valpo had established a double-digit cushion.

Valpo's shooting turned cold early on in the second half. The Crusaders were just 3-of-15 from the floor at the under-12:00 media timeout as Detroit scalped the deficit to 46-41.

Just as she did twelve days ago versus the Crusaders, Shearer caught fire after a quiet first half. The senior drained three treys in a two-minute span to drive the rally comeback.

With the Crusaders clinging to a 48-45 lead, Horton scored eight of Valpo's next eleven points in the midst of an 11-3 Valpo run to gain back an 11-point difference. Shearer was held without a field goal the rest of the way as Valparaiso received 28 points in the paint in the 76-69 victory.

Valpo was 18 for 22 from the free-throw line, boosting its overall team percentage to an HL-best 77.4%.

“I felt like we did a great job of moving the ball,” head coach Tracey Dorow told the media after game. “We weren’t forcing shots and we did a good job of making the extra pass.”

Valpo (6-24) will travel to Green Bay to face the regular season champion Green Bay Phoenix in a 7:00 pm tilt Wednesday night. Links to the audio, video, and live stats will be available at valpoathletics.com.