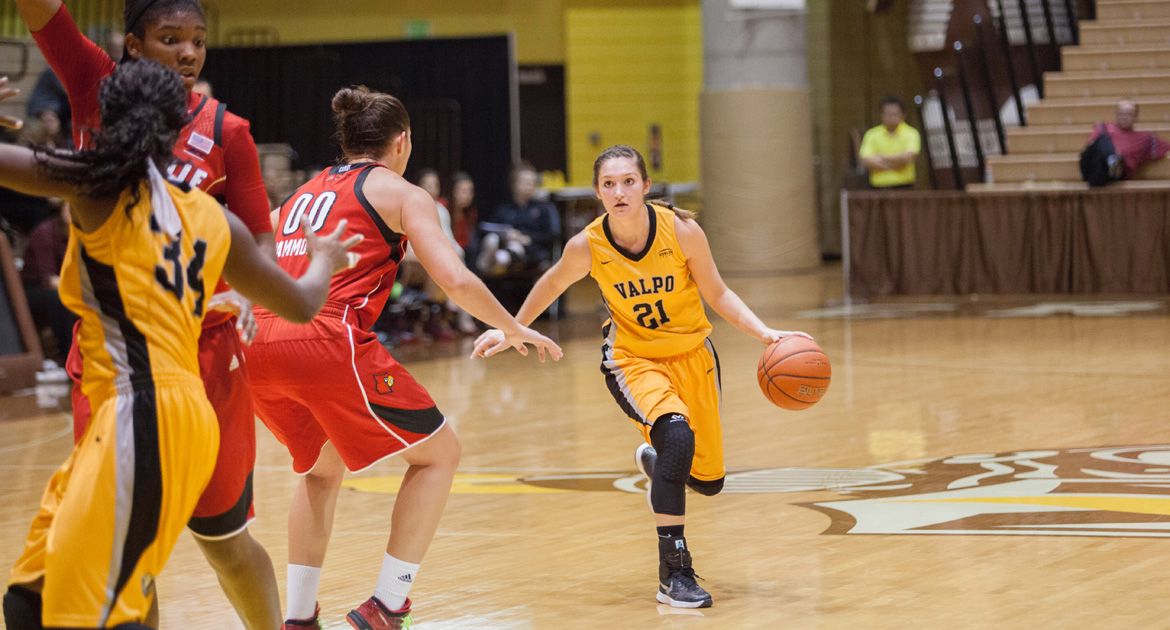 Junior Lexi Miller was 6-for-10 from the field as part of her 14-point day versus #12 Louisville. (Fares Alshammary)
Louisville at Valparaiso | November 30, 2014

The Crusader women's basketball team ditched its polite defense Sunday en route to accumulating a season-best six steals, but #12 Louisville owned a 54-34 advantage in the paint as the Cardinals picked up an 86-59 win over the Brown and Gold at the Athletics-Recreation Center.

Lexi Miller (Caledonia, Mich./Caledonia) and Dani Franklin (Cedar Rapids, Iowa/George Washington) both shot better than 50% from the floor in the losing effort. Franklin reached double figures for the sixth straight game as the freshman tossed in 13 points on 6-of-9 shooting.

Franklin found the nylon on her first three shot attempts inside the arc to account for all six of Valpo's first points. Louisville didn't establish a comfortable lead until midway through the first half. A 12-0 run fueled by Emmonie Henderson had the Cardinals on top 24-8 with under nine minutes to play. A Miller triple ceased the surge, but Louisville stormed right back with a modest 10-3 run.

Louisville possessed a commanding 32-14 edge on points in the paint in the first half. Valpo trailed 48-24 at the break. Franklin found herself in foul trouble early and often as she logged just seven minutes in the first stanza. Miller's eight points paced the Crusaders after twenty minutes.

Junior Abby Dean (Carmel, Ind./Carmel) helped lead one of Valpo's strongest halves of the season. Dean registered four of the Crusaders' first six points of the closing half on a pair of sleek dribble drives. The Valparaiso guards did a commendable job all afternoon handling Louisville's sweltering full-court pressure. The Cardinals translated 22 Crusader turnovers into just 24 points.

Louisville extended its lead to thirty points just once in the second half - and for a brief juncture. Myisha Hines-Allen, who represented one of multiple hard-to-stop power post presences, put home a layup to give the Cardinals a 50-30 lead. Franklin answered right back ten seconds later with a transition jumper on the other end on a nice feed from Jessica Carr (Arcadia, Ind./Hamilton Heights). Carr finished with four points, four assists, and four boards.

The Brown and Gold cut the deficit to as few as 18 on two separate occasions. However, both times Louisville responded.

Louisville (7-0) remained perfect in regular season play with an 86-59 victory over Valpo (3-3). Hines-Allen poured in a game-high 21 points for the Cardinals while Henderson tallied 11 points and 11 boards off the bench. Haylee Thompson (Hailey, Idaho/Wood River [Utah State]) added eight points and four rebounds for Valpo.

The Crusaders (3-3) travel to take on their third MAC opponent Wednesday in Oxford, Ohio. The Miami (OH) RedHawks (1-3) entertain Valpo at 12 pm ET/11 am CT at the John D. Millett Hall. As always, WVUR (95.1 FM, Valparaiso) will have the coverage. Parker Gatewood (PxP) will have the call alongside Brandon Vickrey (Color) and Renee Turpa (Color). Links to the audio and live stats are available at ValpoAthletics.com.