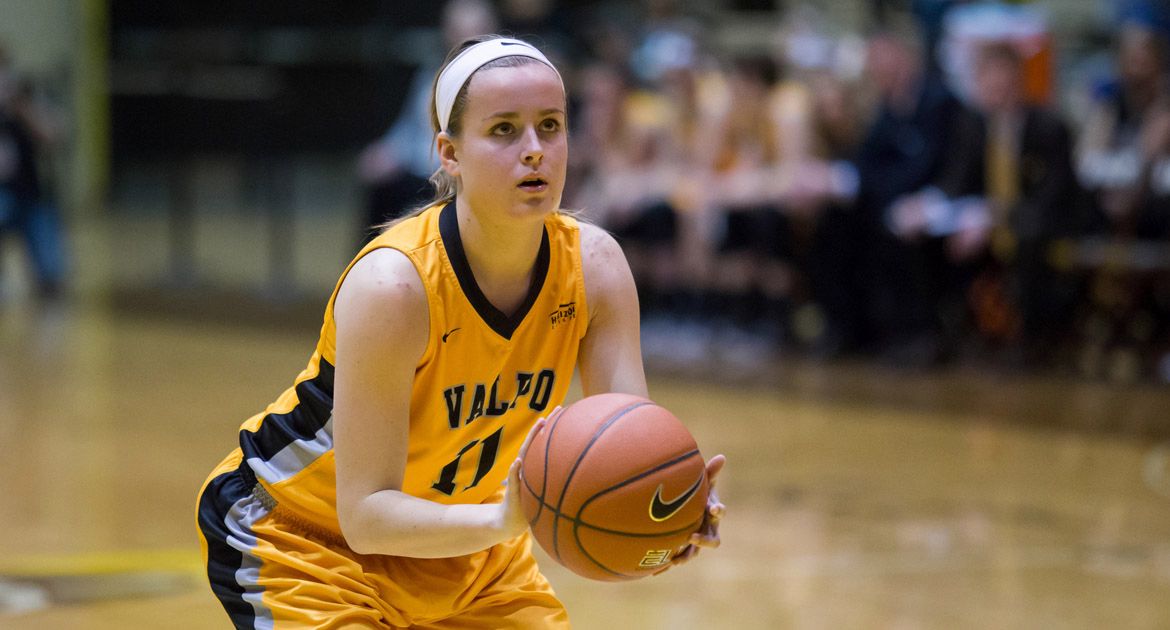 Next Up in Crusader Basketball: Valparaiso travels to Green Bay to square off against the first-place Phoenix Thursday night before returning home for a three-game homestand. Reigning Horizon League Freshman of the Week Jasmyn Walker (9.4 PPG, 7.4 RPG) leads the Crusaders into the Kress Events Center where Valpo seeks its first win since March 1st, 1991.

Last Time Out: Jasmyn Walker tallied 18 points and 13 rebounds to help power the Brown and Gold past Milwaukee, 69-56, at the Athletics-Recreation Center last Thursday night. Classmate Dani Franklin pitched in 15 points while senior Jessica Carr posted ten points and five assists in the Crusaders’ second league win in their last three games. The 56 points allowed were the fewest surrendered by Valpo since November 20th.

Head Coach Tracey Dorow: Tracey Dorow (23-62) is in her third season at the helm of the Valparaiso women’s basketball program in 2014-15. She collected her 250th career victory on November 14th, 2014 after a 91-57 walloping of Butler. In her first season, Dorow led the Crusaders to eleven victories overall, including five in Horizon League play. Dorow arrived in Valparaiso after 14 seasons at Ferris State. She compiled a 232-163 record while with the Bulldogs. Furthermore, Ferris State posted the #1 grade point average in all of Division II for the 1999-2000 women’s basketball season as well as the #2 ranking in 2002-03.

Series Notes: Green Bay leads the all-time series 32-4. The Phoenix have won 17 in a row dating back to February of 2008. Valpo is 2-17 all-time versus Green Bay away from the ARC. The Phoenix outscored the Crusaders 38-17 in the first half of their last meeting as they rolled to a 67-52 victory on Jan. 29th in Valparaiso.

Storylines
- The Crusaders have allowed fewer than 69 points four times in their last five games. They accomplished that just four times in their first 18 contests.
- Valparaiso has yet to play a game this season decided by fewer than six points. The Phoenix have had five such affairs.
- Green Bay comes into Thursday’s game winners in 11 of its last 12 tilts.

@ValpoWBB
- @ValpoWBB closed out the 2013-14 slate with a 6-25 overall record, 3-13 in the Horizon League.
- @ValpoWBB was picked to finish eighth in the Horizon League in the 2014-15 Preseason Poll.
- In last Thursday’s win over Milwaukee, @ValpoWBB committed fewer turnovers than its opponent for the first time since Dec. 9th (S. Dakota).
- With its win over the Panthers, @ValpoWBB matched last season’s win total in Game #23.

Georgi Donchetz
- Scored nine points off the bench last time out versus Green Bay.
- Made her collegiate debut at South Dakota (Dec. 9) and knocked down her first - and only - three-point attempt.