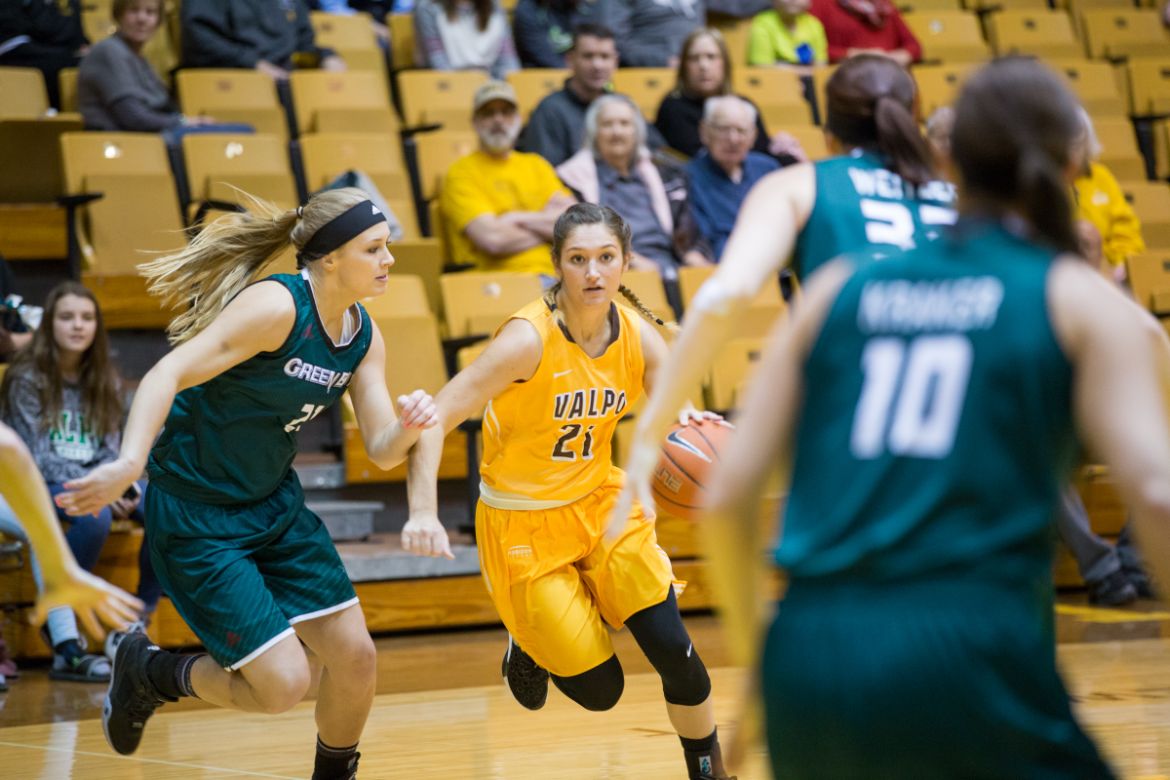 Green Bay's trademark defense secured its spot atop the Horizon League leaderboard as the visiting Phoenix defeated Valpo 71-35 at the Athletics-Recreation Center on Saturday afternoon.

Sophomore Jasmyn Walker (Muskegon, Mich./Mona Shores) registered a team-high 11 points while senior Lexi Miller (Caledonia, Mich./Caledonia) was a perfect 3-for-3 from the field to finish with eight points.

The Phoenix tossed in five second-chance points en route to a 20-8 first-quarter lead. Valpo swung the ball around the perimeter quite a bit, but were handcuffed down low. Green Bay, meanwhile, fired on all cylinders from beyond the arc. They amassed a 7-for-13 mark from downtown through the first twenty minutes.

Allie LeClaire led Green Bay with 11 first-half points. Mariah Monke knocked down a turn-around jumper just ahead of the halftime horn to give the Phoenix a 35-15 halftime lead.

Fourteen turnovers limited the Crusaders to just 13 field-goal attempts in the first twenty minutes. While Valpo was 5-for-7 inside the arc, it misfired on all six of its three-point attempts. Miller's four points paced the Brown and Gold at the intermission.

Walker recorded seven points in a third quarter that saw Valpo operate much more efficiently on offense. The deficit was too large, however.

Green Bay added 16 bench points in the final stanza to cruise to a 71-35 victory.

LeClaire powered the Phoenix with 17 points on 6-of-11 shooting. Mehryn Kraker shot 4-of-7 from the field as part of a 13-point afternoon. Monke tallied 10 points (5-6 FG) off the bench for Green Bay.

After the game, the Crusaders recognized their three seniors - Abby Dean (Carmel, Ind./Carmel), Jessi Wiedemann (Palatine, Ill./Fremd), and Miller - before they addressed the crowd. The trio has combined for 1,804 points, 496 assists, and 669 rebounds in 6,457 minutes spanning 297 career games. They've split 157 starts while at Valparaiso. Head coach Tracey Dorow thanked Dean, Miller, and Wiedemann, expressing her gratitude for their hard work and dedication.

The Brown and Gold closed out their home slate with a 7-9 record.

Valpo (8-18, 4-11 Horizon) will hit the road next week to face Youngstown State (16-9, 7-7 Horizon) on Thursday. Tipoff from Beeghly Center is scheduled for 5:15 pm ET/4:15 pm CT. Links to the broadcasts and live stats will be available at ValpoAthletics.com.