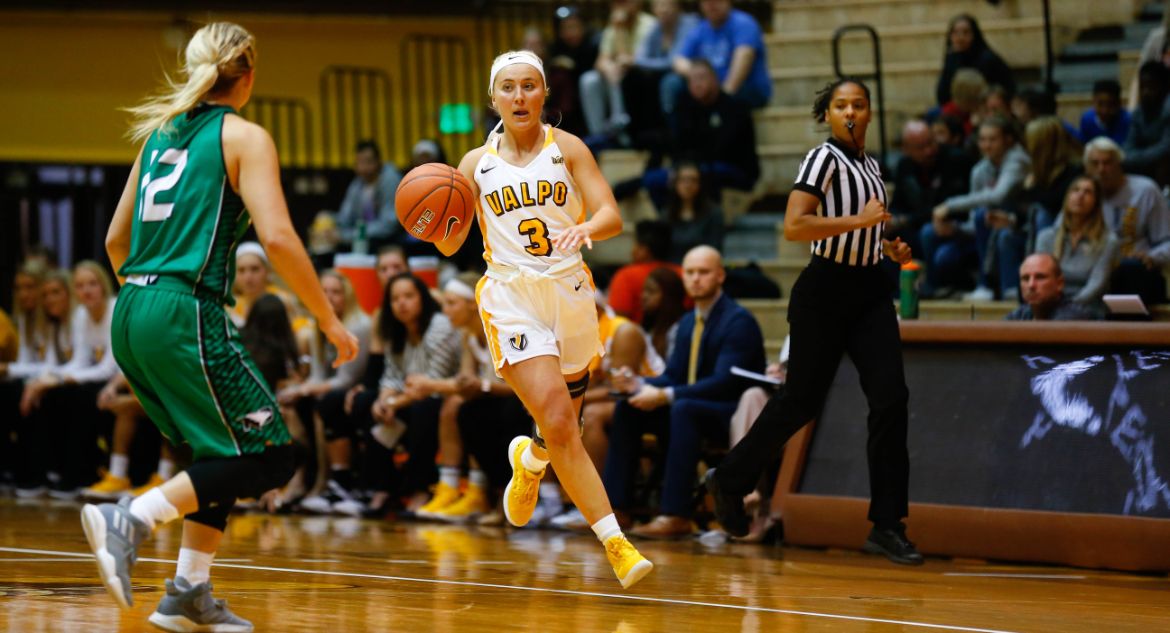 Hannah Schaub is back in the lineup after suffering a season-ending injury in the second game of last season. (Corey Lissy)
Valparaiso at Illinois | November 14, 2018
Related Links
Related Links

Next Up in Valpo Basketball: The Valparaiso University women’s basketball team hits the road this week to play three games in four days, all away from the Athletics-Recreation Center. The journey starts in Champaign, as Valpo visits Big Ten foe Illinois on Wednesday evening.

Last Time Out: Valpo battled back late in the game, but couldn’t overcome a deficit created in the third quarter of a 62-56 loss to North Dakota. Meredith Hamlet led her team with 15 points, 12 of which came in the fourth. Shay Frederick reached double figures with 11 points and pulled down six boards in the first home game of her collegiate career, while Addison Stoller filled the stat sheet with nine points and a career-high eight boards.

Following Valpo: Wednesday’s game will be broadcast on BTN+, which is available online with the purchase of a subscription. In addition, the game can be heard on 95.1 FM Valparaiso and online via the TuneIn Radio app with Ben Ariano (play-by-play) and Brandon Vickrey (color commentary) providing the hometown call. For in-game updates, follow @ValpoWBB on Twitter. Links to live video, audio and stats will be available on ValpoAthletics.com.

Series Notes: Valpo and Illinois have faced off three times, with the Illini prevailing in all three matchups. The most recent game was in 2014 at the ARC, while Valpo’s last visit to Champagne came in 2013.

Milestone Watch: Valpo senior Meredith Hamlet has moved to within striking distance of a noteworthy milestone as she enters Wednesday’s game with 983 career points, needing 17 to hit the 1,000-point threshold for her collegiate career. She would become just the 15th player in program history to score over 1,000 points. It doesn’t take much of a journey into the Valpo women’s basketball history books to find the last 1,000-point scorer, as Dani Franklin reached the milestone on Jan. 17, 2017 at Green Bay. With her 15-point effort on Sunday against North Dakota, Hamlet climbed to 16th in program history in career scoring, surpassing both Agnieszka Kulaga (2005-2009, 971) and Cheryl Wilbrandt (1989-1993, 978). Hamlet is 10 points away from overtaking Shari Toelke (1990-1994, 992) for a spot in the Top 15. In addition, Hamlet has 155 made 3s, a total that ranks seventh in program history. She is 17 away from entering the Top 5.

Battling The Big Ten: Valpo enters Wednesday night seeking its first win against a Big Ten team since topping Indiana 64-52 at the ARC on Nov. 9, 2012. Although Valpo has never beaten Illinois, the program does have wins over four Big Ten schools – Indiana, Purdue, Northwestern and Michigan. Valpo bested Northwestern 57-51 on Nov. 30, 2005, beat Michigan 62-49 in the first round of the WNIT on March 13, 2002 and most notably upset No. 21 Purdue on Dec. 10, 2008 by a score of 71-60. This will mark the fifth power conference venue that Valpo’s seniors have had the opportunity to play in during their time on campus. Valpo went to Louisville in 2015-16, Notre Dame and Indiana in 2016-17 and Purdue in 2017-18. Valpo’s last Big Ten game saw Meredith Hamlet go off for 19 first-half points and knock down five 3s prior to halftime last year at Purdue.

Making a Living at the Line: When Meredith Hamlet made 12 free throws last week at UIC, not only did it set a career high, but it came within one of entering the Top 10 in program history for single-game made free throws. It was the most made free throws by a Valpo player in a single game since Ashley Varner had 13 at Cleveland State way back on Feb. 4, 2012. Hamlet ranks ninth nationally with 20 free-throw attempts and sixth nationally with 16 made free-throws this season.

Starting Strong: When Shay Frederick turned heads with her play over the first two games of the season this past week, she wasn’t the first Valpo freshman to do so in recent years. Last season, Bryce Blood posted a double-double of 13 points and 13 rebounds in her first collegiate game. Two years ago, Grace Hales opened up her collegiate career by knocking down three triples at Stetson. Meredith Hamlet contributed nine points in her first career game in 2015, while Dani Franklin started her career with 14 points against Butler in 2014.

Swiping It Away: Valpo racked up 15 steals in the season opener last week at UIC, led by four from Addison Stoller. Stoller, Ella Ellenson (3), Allison Schofield (3) and Shay Frederick (3) all set career highs in steals in the game. It marked the most steals by Valpo in a single game since Jan. 23, 2014, when the team accumulated 18 in an 85-44 win over Detroit Mercy. Valpo leads the MVC in both total steals (20) and steals per game (10.0). Stoller and Schofield are tied for second in the league with 2.5 steals per game.

New-Look Lineup: All five players who started last week’s season opener at UIC were on the roster last season, but four of the five combined to start only three games a year ago. Senior Allison Schofield played in her 63rd career game and made her first career start. It took her just one game to exceed her total number of made 3-pointers from last season by going 2-for-2 from beyond the arc while playing 29 minutes after averaging 6.4 minutes per game last year. The 29 minutes were a career high, eclipsing her previous high of 22 that came on Dec. 4, 2016 at Notre Dame. Addison Stoller made her second career start after a pair of injury-plagued seasons. Hannah Schaub returned after suffering a season-ending injury in the second game of 2017-18. Sophomore Ella Ellenson made her first collegiate start.

Lineup Constants: The one constant in the starting five from last year’s regular starters to the lineup in each of the first two games this season was Meredith Hamlet, who made her 90th career start. Hamlet has started all but two of the games she’s played in her Valpo career. She and Schaub both started on opening night for the fourth consecutive season as both burst into the starting lineup as freshmen.

Inside the Fighting Illini