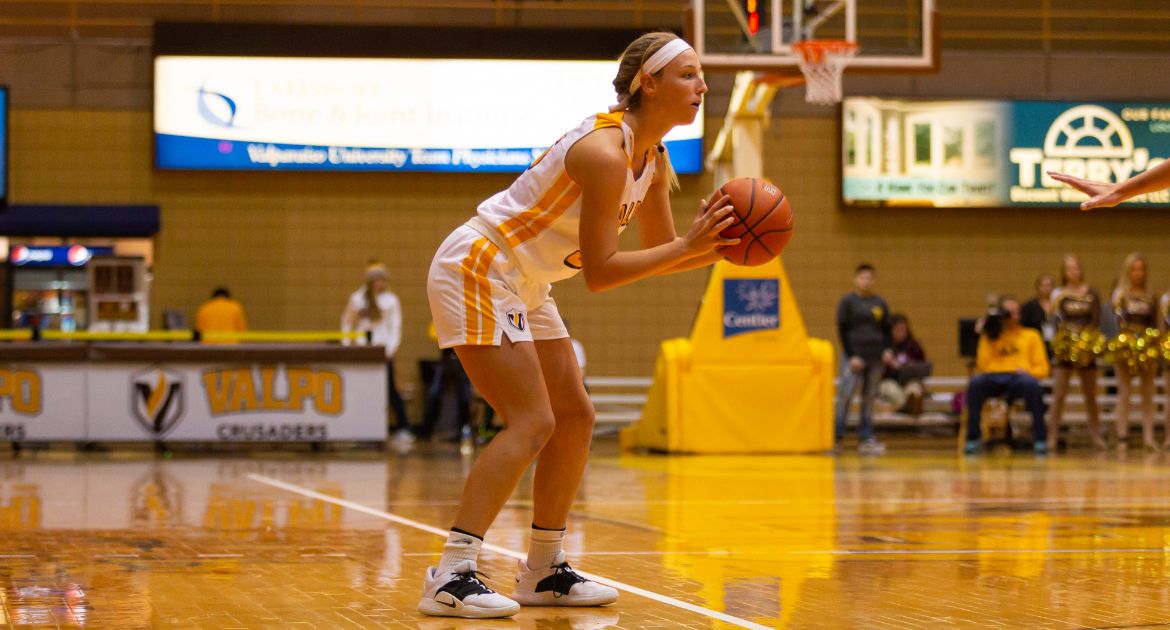 Grace Hales hit a key 3 in the final minute and finished with 17 points on Wednesday.
Valparaiso at Purdue Fort Wayne | December 19, 2018

Key contributions came from a variety of sources for the Valparaiso University women’s basketball team on Wednesday night in Fort Wayne.

The game was still hanging in the balance with Valpo clinging to a one-point lead with 38 seconds to go. That’s when Grace Hales (Cromwell, Ind. / Westview) fired up a 3-point try from the right corner that left her hands a fraction of a second before the shot clock reached zero. Swish.

That triple helped cap a 68-64 victory over Purdue Fort Wayne that featured signature performances and clutch plays from numerous players – all amounting to a happy bus ride home following a road victory.

“Our team played hard the entire game. I thought it was a really good defensive effort tonight. We shared the basketball well as a team and stuck with the game plan. We had a lot of players step up and make shots.”

“It means a lot that we battled through adversity tonight. We’re a young team in the sense that we’re learning a new system. We are facing adversity with the number of people we’ve had injured. This team sticks together and plays together night in and night out. They stuck together tonight and got defensive stops when we needed them. They fought through a lot to get this win.”

“Both Addison and Ella were huge tonight. Both were able to drive and get to the rim most of the game. They attacked consistently, and they stepped up and hit free throws. They drove to the rim and made good decisions throughout the night.”

“Every game helps us get a step closer as we continue to learn and grow. We had a tough day at the free-throw line on Sunday, and we hit 16-of-18 tonight. This team has a desire to learn and grow and fix things we struggled with in the previous game. If we keep doing that, we’ll continue to see positive things from this group.”

Valpo (4-7) will face a quick turnaround for a home game against Bowling Green that begins at 5 p.m. CT on Friday at the Athletics-Recreation Center. The game will be broadcast on ESPN3 and on the radio on 95.1 FM WVUR. Links to live video, audio and stats will be available.