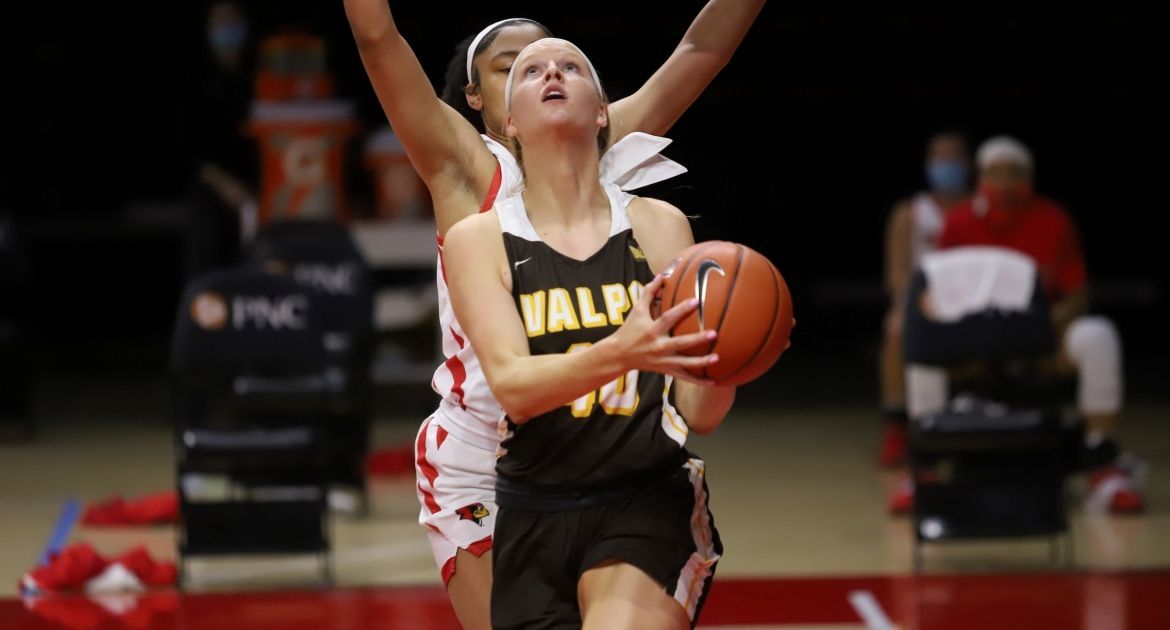 It looked like the Valpo women’s basketball team was poised to capture its first win over a nationally-ranked team in 13 years Sunday afternoon at the ARC, but a foul called on a 3-point attempt with 0.8 seconds to play allowed visiting #RV/25 Missouri State to hit three free throws and pull out a 74-73 victory. The ending overshadowed a strong performance by Valpo, highlighted by 20-point games from senior Caitlin Morrison (Glenview, Ill./Glenbrook South) and junior Carie Weinman (Glenview, Ill./Glenbrook South [Denver]) and a great team effort on the glass.

“I thought we played really good basketball today. Our players were tough, they were together, they worked hard enough to win the game — I think they were the harder-working team today by far. To lose a game on your home floor like that in the last second, it hurts. It hurts a lot, and that's good that it hurts, it's good that it hurts our players because it means that they're competitors. You often grow in your biggest adversity, and this is some adversity that we're going to face — we're going to grow from it, we're going to learn from it and get better.”

“I’m really proud of the team for their effort on the boards. Rebounding has been our achille’s heel since I've taken over the program — we've never been a really strong rebounding team. We challenged them with this knowing how good Missouri State was on the glass, and our players really worked hard today to step up. We had all five people in there boxing out and they were scrappy about it, and that's how we have to rebound.”

Valpo (6-8, 2-5 MVC) will close out a stretch of five consecutive home games later this week when it welcomes Bradley to the ARC for 6 p.m. tipoffs on Thursday and Friday evenings. Both games will be broadcast either on ESPN3 or ESPN+.