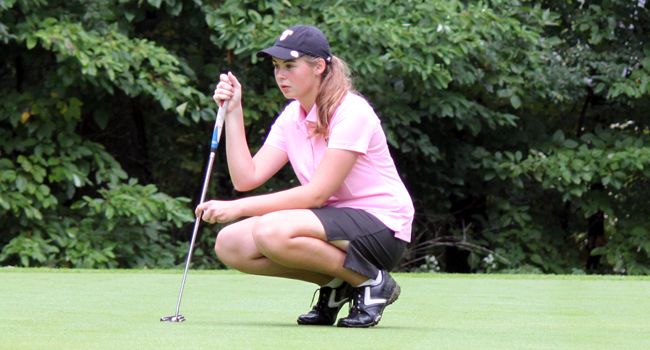 The Valparaiso women's golf team improved by 14 shots in its second-round performance Tuesday at the Dayton Fall Invitational, finishing in eighth place at the 36-hole event at NCR in Dayton, Ohio.

The Crusaders shot a team round of 315 on Tuesday, improving by 14 strokes over their score on Monday and closing with a final score of 644, good for eighth place in the 18-team field and just four shots out of seventh place. Detroit claimed the team title with a score of 610, while Marshall's Rachel Thompson earned individual medalist honors. Valpo bested three of the four Horizon League squads at the tournament, finishing ahead of Youngstown State, UIC and Green Bay.

Senior Michelle Kleckner (New Brighton, Minn./Irondale) led the Crusaders by finishing tied for 15th, shooting a 77 on Tuesday to finish the tournament at 156. Sophomore Sibil Gill (Kokomo, Ind./Western) shot a 79 on Tuesday to close the 36-hole event at 161, good for 34th place, while junior A.J. Selig (Hortonville, Wis./Appleton West) matched Gill's final-round 79 to finish one shot back in a tie for 35th at 162.

Valparaiso closes out its fall season early next week at the Braun Intercollegiate, held Oct. 28-29 at Quail Crossing G.C. in Boonville, Ind.